It's Not Over Yet: Even a Former Clinton Aide Says Trump Has a 'Stealthy Road to Victory' 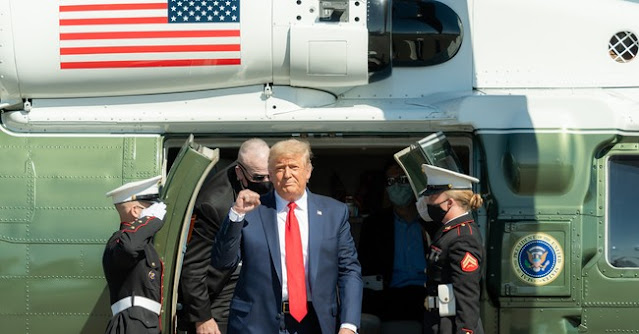 Well, after that big legal win in Pennsylvania—it’s time to dig in and fight on… We still need to count the ballots and tally the legal votes. We have allegations of voter fraud that should be investigated. And we have the legal challenges that need to play out. As Katie wrote today, Team Trump scored a big win in the Keystone State:

A Pennsylvania judge has ruled in favor of the Trump campaign by concluding segregated ballots should not be counted. Further, the judge found that Pennsylvania Secretary of State Kathy Boockvar lacked the "statutory authority" to change election law just days before Election Day.

"[The] Court concludes that Respondent Kathy Boockvar, in her official capacity as Secretary of the Commonwealth, lacked statutory authority to issue the November 1, 2020, guidance to Respondents County Board of Elections insofar as that guidance purported to change the deadline in Section 1308(h) of the Pennsylvania Election Code...for certain electors to verify proof of identification, based on Secretary Boockvar's interpretation and application of the Pennsylvania Supreme Court's decision in Pennsylvania Democratic Party v. Boockvar," the ruling states. "Accordingly, the Court hereby ORDERS that Respondents County Boards of Elections are enjoined from counting any ballots that have been segregated."

State statute forbids destruction of ballot envelopes prior to two years. That illegal act throws into question auditing; thus, it could be argued, those votes cannot be certified.

(There are 100K suspect mail-in ballot dates, per the state's official database.) 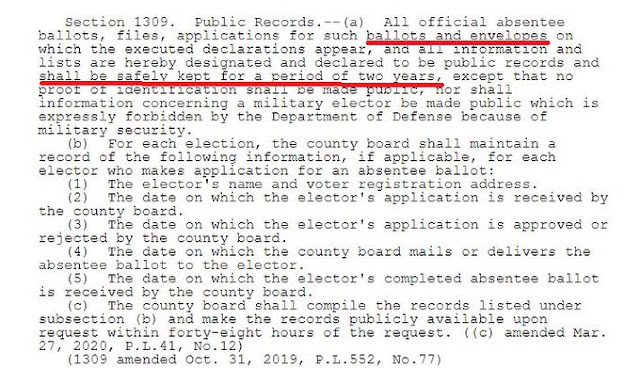 This is why you keep fighting. The old GOP would have caved and rolled over like a dog. The Trump Republican Party doesn’t stop until there’s no time on the game clock. We discussed one way this race could become a nightmare for Democrats, which is grounded in Biden ballots being invalidated in Wisconsin, Arizona, and Georgia over fraud concerns. It wouldn’t take many ballots, with about 45-50,000 or so—somewhere in that neighborhood. These votes would lead to a 269-269 tie that could bring this race into the House of Representatives. The GOP holds the advantage regarding state delegations 26-23. Yet, before that, let’s focus on the electors.

When former aides to Bill Clinton are saying there’s a chance, it’s not tinfoil hat stuff, which is how the liberal media has treated this. Graham Allison, who served as Assistant Secretary of Defense for Policy and Plans under that administration, recently wrote in The National Interest about one path that’s being ignored. He called it a “stealthy road,” and one that’s being overlooked. We have to go back to the 1876 election. Allison noted that state legislatures have the authority to declare that the popular vote was corrupted, thereby, permitting them to send a competing set of electors. I’ll let him explain the rest [emphasis mine]:

I believe the current consensus is missing the fact that Trump has a second, viable stealthy road to victory. I’m reluctantly betting that the debate about who won will continue until at least January 6 when slates of electoral college members are opened in Washington, and most likely beyond that as whatever is decided then is appealed by the loser to the Supreme Court. My conclusion reflects the analysis of my colleague in the Applied History Network at the Belfer Center which is below.

As he notes, this stealthy road follows in the footsteps of a number of previous contested American elections, especially the 1876 election that pitted Tilden v. Hayes. Then as now, each state must decide on a group of electors to meet with a joint session of Congress on January 6 where the winner of the presidential election is declared. The normal practice in a state where Biden won the popular-vote total would be for state election officials to certify the results and send a slate of electors to Congress. But state legislatures have the constitutional authority to conclude that the popular vote has been corrupted and thus send a competing slate of electors on behalf of their state. The 12th Amendment to the Constitution specifies that the “President of the Senate shall, in the presence of the Senate and House of Representatives, open all the certificates and the votes shall then be counted.” That means that in the case of disputes about competing electoral slates, the President of the Senate—Vice President Pence—would appear to have the ultimate authority to decide which to accept and which to reject. Pence would choose Trump. Democrats would appeal to the Supreme Court.

Alternatively, if at that point, no candidate has the required 270 electoral votes, the 12th Amendment stipulates, “the House of Representatives shall choose immediately, by ballot, the President. But in choosing the President, the votes shall be taken by states, the representation from each state having one vote.” [GOP has the majority there]

…both the words of the 12th Amendment, and historical precedent offer a credible, stealthy, winding road that could lead to Trump’s victory and a second term. Or as the saying goes: the opera ain’t over till the fat lady sings.

He then details his points further but did add that Trump only has a 20 percent chance of pulling this out. Still, that shows this isn’t all nut bar factor six. Keep fighting. Keep counting the legal votes—and stay in the trenches. Also, aren’t you glad we confirmed Justice Amy Coney Barrett before Election Day?