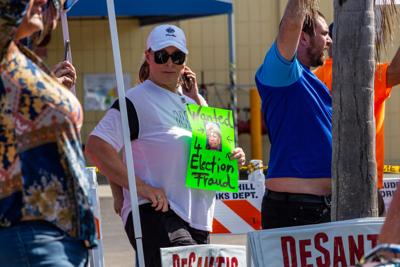 “The ignorance of one voter in a democracy impairs the security of all.”

Our founders did not include voting as a right in the Constitution since the right to vote is an act of free speech. It was not until the 14th Amendment in 1870 that it became a federal crime to deny the right to vote to any adult male citizen who had not committed a felony. But voting remained a privilege.

Throughout the years, voting has remained a local issue, managed by individual states. States are allowed to write and enforce voting laws for local elections and state business. We also vote in-state on federal elections. There are few laws specifically governing federal elections. The state election process is only amenable to federal prescripts and statutes in the 1965 Voting Rights Act.

The colonies did not want the central government to control elections. They feared federalism and refused to ratify the Constitution without guaranteed basic rights. Their worst fear took place at the first Congress in 1798. Thomas Jefferson and Alexander Hamilton fought like two junkyard dogs over a day-old bone about federalism and split the nation into political parties. And party politics has governed us since.

“Political parties enable unprincipled men to subvert the will of the people.”

If the colonies feared federalism so much and spent 240 years fighting it under the cloak of the 10th amendment, why are there so many outcries for federal intervention into elections now? Simply the Covid crisis introduced new challenges to in-person voting and caused an unprecedented flood of mail-in ballots. Some voters did not get ballots, received them late or after the election. Some poll places opened late or not at all. Other voters showed up and found their location had changed.

The 2020 presidential election proved one conspicuous thing: our states need adult supervision during federal elections. Ballots appeared out of nowhere and disappeared into oblivion as states changed election rules at will. There is more organization at a destruction derby than there was in many swing states this election year. These states made the free-for-all in Florida look organized.

Americans have never had less faith in the federal electoral process than this year. After over two weeks, we do not have a certified election; similar to what happened in Florida. And it gets worse: The media called the election for “us” instead of Congress and the Federal Election Commission. An election is not official until one candidate concedes or when all states have certified their count.

"I hope my vote counted? There could be a hanging megabyte on a touch screen?"

According to pollsters at Just the News Daily and Rasmussen, only 49% claim Biden won and 34% say Trump won while 17% aren’t sure? The poll included 37% Democrats, 32% Republicans and 19% Independents. Those surveyed say the media confused them most; before, during and after the election, with opinions rather than facts. Those aren’t good numbers no matter who is counting.

The biggest concern this election, besides questionable activities at polling places, was the use of mail-in ballots. According to Rasmussen, 86% GOP voters said arbitrary mail-in voting led to more problems. And 44% said they are very concerned. Fewer Democrats, 59%, said they felt concerned this practice was flawed, and 36% felt the arbitrary mail-in ballots created more issues this election.

“We learn to count accurately in the first grade. Why is it so hard to count ballots?”

People think of elections as voters across the nation participating in a single event when they are voting in a federal race. But in reality they are run by local partisan politicians. They make up their own rules about ballots, districts, times, and counting. As a result, some voters feel they have been slighted, and others feel they got the upper hand in picking winners and losers in federal contests.

The challenges of holding a free and fair vote in America have been mounting for decades, but the Covid crisis stress-tested our election system this year like never before. Since 2000, court battles over election rules have become tenacious. The respected Global Economist’s Democracy Index downgraded the U.S. score for democracy for the first time this last decade due to voting issues.

We have two current federal election oversight commissions; the Election Assistance Commission, which makes administrative and security recommendations to the states. And the Federal Election Commission, which oversees campaign finance laws. Both of these are antiquated and inefficient.

“If you want to destroy something, put the government in charge of running it.”

The Federal Election Commission (FEC), created in 1974 as a regulatory agency, has not had a quorum for two years since there must be two members of each party to make a legal decision. The Election Assistance Commission (EAC) was created by the Help America Vote Act of 2002. It provides information to the states about HAVA guidelines but lacks authority to enforce any laws.

Democrats passed HR1 in 2019, but it was DOA in the Senate because the bill was a wish list of far left ambitions to control all federal and state elections. HR1 would have forced federalism upon the states, violated the Constitution, the separation of powers, freedom of speech and our individual rights.

A number of recent proposals by Democrats and Republicans are being discussed after this last election, but chances of them getting past first base are slim and none. American voters deserve better. Congress must establish an independent federal elections agency, staffed by non-union federal employees to ensure the voting process is Constitutional, consistent, secure and legitimate.

According to the 10th amendment, states control their local elections and must follow provisions of the Voting Rights Act. But the federal government can legislate elections where candidates run for federal office. Article I, Section 4 of the Constitution states the times, places and manner of holding elections for senators and representatives is assigned to each state. But Congress may alter such regulations at any time. This gives Congress the power to “make or alter” all federal election laws.

Ronald Reagan once said, “Government exists to protect us from each other.” With today’s political divide, it is highly unlikely bipartisan election reform legislation will pass that pleases both political parties. And if the new Federal Election Agency is run by politicians, instead of citizens, it will be as inefficient as the FEC and the EAC. And we’d have even more chaos than we had during this last election.

“If you do not want to be lied to, then you need to stop following politics.”

Members of Congress think they work for their party, not the American people. That is the problem with election reform. Until we create an independent civilian agency and remove Congress from the process of enforcing or interpreting election laws, and handling compliance complaints of election laws, we’ll continue having politicians and the media managing our elections instead of the people.

“We stand today at a crossroads: One path leads to despair and utter hopelessness. The other leads to total extinction. Let us hope we have the wisdom to make the right choice.”