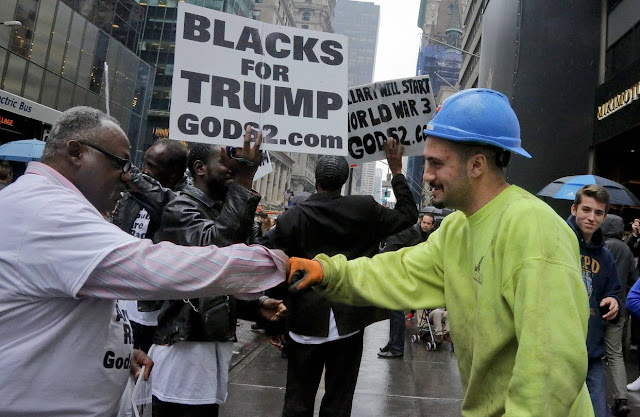 Team Trump’s outreach was stuck in 1984, when the black electorate was a GOP afterthought at best.
By Jason L. Riley

Despite the best efforts of Beyoncé, Jay Z and Stevie Wonder, the minority voters who twice propelled Barack Obama to White House victories didn’t turn out in the same force for Hillary Clinton, which may have cost her the presidency.

According to CNN exit-polling data, Donald Trump slightly outperformed Mitt Romney in 2012 among blacks and Latinos, even though the president-elect did next to nothing to court the former and mostly antagonized the latter with his immigration rhetoric.

This year Mrs. Clinton beat Mr. Trump, 88% to 8%, among blacks, who comprised a smaller 12% of the electorate.

Among Latinos the story was similar. Mr. Trump did two points better than Mr. Romney’s 27% in 2012, and Mrs. Clinton did six points worse than Mr. Obama’s 71%, even as the Hispanic share of the electorate rose a point to 11%. She won 65% of the Asian vote, but Mr. Obama received 73% four years ago.

The final part of the Obama coalition is young voters, where she easily outpaced Mr. Trump, 54% to 37%, but trailed the president’s 60% in his re-election bid. No one expected the former secretary of state to match Mr. Obama’s minority appeal, especially among blacks. But her big primary victories over Bernie Sanders in states with large black populations had the campaign hoping that she would come closer to holding that Obama coalition than she did on Tuesday.

Republicans who look at these results and conclude that outreach isn’t a priority because the party can still win elections without minorities are being shortsighted. Democrats can’t be counted on to nominate historically unpopular presidential candidates, and the demographic clock is working against the GOP as Mr. Trump’s overwhelmingly white core of supporters declines as a share of the electorate.

Asians are the fastest-growing racial group in the country, and their numbers have exploded in battleground states such as Nevada, Arizona, North Carolina and New Hampshire. Since 2012, the number of eligible Hispanic voters has grown by four million. Why not make a better effort to court these voters instead of hoping they stay home on Election Day?

In his memoir, “My Grandfather’s Son,” Supreme Court Justice Clarence Thomas recounts his days as head of the Equal Opportunity Commission under President Reagan in the early 1980s. “I offered my assistance to President Reagan’s reelection campaign, only to be met with near-total indifference,” he writes. “One political consultant was honest enough to tell me straight out that since the president’s reelection campaign didn’t include the black vote, there was no role for me.”

In more recent years, Republican Party officials have been open about the need to court more minority voters, particularly after Mr. Romney’s unsuccessful presidential bid in 2012. Yet black conservative activists tell me that Team Trump’s approach remained stuck in 1984, when the black electorate was a GOP afterthought at best.

Liberal pundits were quick to attribute Mr. Trump’s victory to white racism because that is pretty much their knee-jerk explanation for Democratic failure and Republican success. There’s no denying that Mr. Trump’s white-identity politics won him a following among some unsavory folks outside of the political mainstream, but it’s also true that the president-elect won states like Wisconsin, Ohio and Florida—all of which went for Mr. Obama twice.

And nothing that Mr. Trump said, did or even hinted at matched the overt and repeated racial appeals that came from the president himself, who said in September that he would consider it a “personal insult” if blacks didn’t back Mrs. Clinton. Do liberals really oppose this kind of identity politics or do they simply want a monopoly on the practice?

Of course, many black voters will never get past Mr. Trump’s birther antics—even if safer neighborhoods, good schools and jobs are much more important to them than an apology. The hard reality is that blacks as a group have lost ground economically on the president’s watch, which might explain why so many ignored his earnest pleas to elect a Democratic successor.

Democrats will continue to enjoy strong black support for the foreseeable future, but Mrs. Clinton’s struggles with younger minorities in particular provide an opening that Republicans, with or without Mr. Trump’s blessing, ought to be eager to exploit.

Mr. Riley, a Manhattan Institute senior fellow and Journal contributor, is the author of “Please Stop Helping Us: How Liberals Make It Harder for Blacks to Succeed” (Encounter Books, 2014).
http://www.wsj.com/articles/donald-trumps-minority-voters-1478739326
Posted by Frances Rice at 3:31 PM