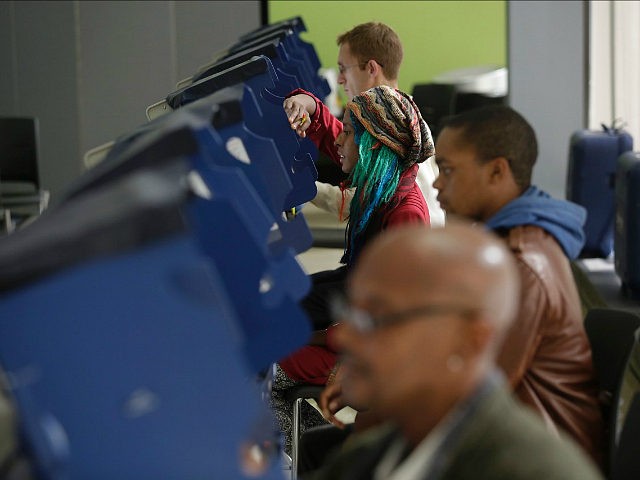 By Neil Munro
5 Nov 2016
Donald Trump is on track to double Gov. Mitt Romney’s support among African-American voters, according to a series of state polls.
In 2012, African-Americans comprised a record 13 percent of all voters. President Barack Obama was reelected with 93 percent of the African-American vote, leaving Gov. Mitt Romney with only 6 percent of the African-American vote. Obama is now campaigning against Trump, and hoping to keep his share of the African-American vote below the 11 percent that George W. Bush won in 2004 during the housing bubble.
On Friday, a poll of 506 Pennsylvania voters by Harper Polling showed Trump has the support of 18.46 percent of African-Americans. That’s eight points more than Romney’s share of the national vote in 2012, and if it proves true during the ballot, that 18.46 percent African-American support translates into 2 point shift towards Trump. The poll also said another 4.6 percent were undecided.
The Harper poll is small, with an error margin of 4.4 percent, but an Oct. 30 poll of 1,249 likely voters in Pennsylvania showed Trump has 19 percent support among African Americans, while another 7 percent remain undecided. That poll has a error margin of 2.77 percent.
In next-door Michigan, two nights of a tracking poll conducted for Fox 2 of 1,150 likely voters showed Trump with 14 percent support and 19 percent support, leaving Clinton with 83 percent and 79 percent support. That’s equivalent to a two-point shift from Clinton to Trump in the state.
“We’re showing Donald Trump doing far better among African-Americans than any other Republican in modern memory, said John Yob, CEO of a Michigan-based polling firm, Strategic National. Trump “has done an excellent job in campaigning for the votes of African-Americans,” he said, partly by campaigning in Detroit, said Yob, whose automated tracking polls show Trump and Clinton running level in the state.
Trump is gaining in Michigan partly because many African-American voters — especially younger voters who backed Sen. Bernie Saunders — distrust Clinton, said Wayne Bradley, state director of African-American engagement for the Michigan Republican Party. “There is a tremendous  trust deficit with Hillary Clinton” because tough anti-crime laws established when her husband was president in the 1990s, he said.
That distrust has helped cause a sharp drop in the number of absentee ballots mailed in from Detroit, even as other part of the state send in more ballots that before, Bradley said. Faced with a low turnout, the Clinton campaign is trying to frighten African-Americans to vote, but “that’s not a convincing enough argument,” he said.
“Detroit as of Wednesday had seen absentee ballots returns equaling just 46 percent of the total 2012 absentee vote in the city, and the city clerk’s office is forecasting a decline of 10,000 absentee ballots compared to 2012, a fall of 12.5 percent,” according to a review of absentee records by the Gongwer.com website, which intensively tracks Michigan politics. It is “possible that the falloff portends reduced [election day] voting at the precincts, in which case … Clinton could net something like 32,000 fewer votes out of the city than President Barack Obama did in 2012.”
...
Trump’s gain among African-American voters is happening in many states, alongside an overall reduction in African-American enthusiasm and support for Obama’s designated successor. That drop-off in support from Obama’s 93 percent level will likely reduce the turnout for Clinton.
That’s a problem for Democrats, because a 7.5 percent drop in nationwide African-American turnout would be equal to a one-point drop in a nationwide vote for Clinton.
Reports say the early-voting turnout by African-Americans has dropped by up to 10 percent in North Carolina and by somewhat less in Florida. President Barack Obama and other top Democrats  have hopscotched through the states to push that turnout back up by election day.
But pollsters face problems when trying to gauge opinions in a high-stakes emotional competition.
For example, a large slice of African-Americans are picking “undecided” in some polls. The Washington Post is reporting that Clinton is leading Trump by 79 percentage points among African-Americans, but the fine print in the article says Clinton’s score is 82 percent and Trump’s score is 3 percent — leaving 15 percent who did not pick either candidate. So if Trump gets just one-in-five of the undecided African-American voters, he reaches Romney’s 2012 level.
...
In North Carolina, 19 percent of African-Americans support Trump, according to an Oct. 30 survey of 1176 likely voters by Remington Research Group.
...
In Florida, a Siena University poll showed that Trump had the support of 13 percent of African-Americans. More ominously for Clinton, she had the support of only 83 percent, while 4 percent said they didn’t know who to vote for. If Trump gets one-quarter of the 4 percent, he reaches 14 percent of the African-American vote, leaving Clinton with roughly 86 percent.
...
A Remington Research automated poll of 1,106 likely voters in Virginia showed Trump with 19 percent, and Clinton with just 78 percent support.
In Georgia, a Nov. 2 to Nov. 3 poll of 1,000 likely voters showed Trump with 12 percent of the African-American vote, leaving Clinton with 85 percent.
Amid the disagreement, rivalries and complexity, Bradley is confident that Trump will do well among African-Americans.
His final tally as the GOP candidate “will be a higher number that it has been in the past… [because] he’s working, he’s coming to these cities to deliver the message.”
The African-American vote may even be enough to help push Trump over the so-called “blue wall” of Democratic northern states that stands in his path to the White House.