Liberals Have a Choice: Reach Out to Trump Voters, or Condemn Them 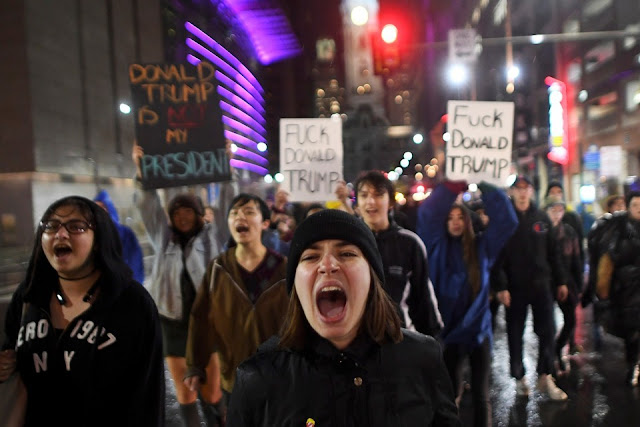 If progressives want to win back political influence in America, they may need the support of the people they see as racists.

PHILADELPHIA—They marched defiantly down John F. Kennedy Boulevard, carrying signs that said “White violence is silence!” and “Dykes against the Klan!” They were young, mostly female, some with blue and shock-blonde hair shaved up the sides. They were black women, brown women, gay women, trans women. They were there to protest the election. They were self-described feminists, fighting back.

As Washington slowly hobbles back toward normal, with talk of transition teams and cabinet appointments and the first 100 days, progressives are still reeling. Late last week, several hundred people gathered for multiple rallies in Philadelphia, but this hasn’t just been happening in Pennsylvania. Thousands of protesters outside Trump Tower in New York. Students walking out of class in Oakland. People occupying New York Senator Chuck Schumer’s office in D.C. This is not just “small groups of protesters” coming together, as Donald Trump put it last week.

Trump is preparing to become president, and liberals in America are facing a decision about how to deal with what’s ahead. Like other progressives across the country, Philadelphia’s protesters were angry, scared, sad, and disappointed. They had many critiques of Trump, but above all, they rejected his statements toward women, immigrants, and people of color. “Racist, sexist, anti-gay!” they chanted, pumping their fists. “Donald Trump is KKK!”
This is the paradox progressives at all levels of politics must grapple with as they figure out what to do next: They see Trump—and by extension, his supporters—as violating basic principles of decency and morality.

And yet, this is what democracy wrought. Across all levels of government, America is about to be run by Republicans. They hold both chambers of 32 states’ legislatures, compared to 13 controlled by Democrats. They are the governors in 34 states. They dominate both houses of the United States Congress. No amount of protesting can change the fact that 60.5 million Americans voted for Trump. He will still be president, and many of those who elected him will still think in ways radically different from progressives. Protesters in Philadelphia and elsewhere seem to be mobilizing a political resurgence. But first, they’ll have to decide how much they’re willing to engage with Trump voters in a bid to win back their votes—even though many progressives think, as 21-year-old Mary Sarbaugh put it, “all of them are a little bit racist.”

At the protest in Philadelphia, one microcosm of the larger progressive backlash against Trump, many people seemed oriented toward taking action: “After we feel our feelings, we have work to do,” one of the organizers shouted through her bullhorn. A number of the protesters were new to the political scene.

“I regret not being more active in the Hillary Clinton campaign,” said Kathryn Graves, a 23-year-old from Virginia who identified as a queer woman of color. She felt comfortable under Obama’s presidency, she said, and “because of that, I was able to be complacent. … It gave me a false sense of security.”

Trump’s election changed that. “I do feel an element of personal responsibility in how little I was active before now,” Graves said. “My friends and I have resolved to attend every town hall we can find, local elections—basically anything where we can show up and get involved.” Many of the protesters talked about the importance of donating money to groups like the American Civil Liberties Union and organizing coat and food drives. “I’m going to protest every day I can,” said Assad Khafre, a 23-year-old from Philly.

Others echoed the need for engagement with local politics. Ted Bobik, 29, said he was going to start “paying attention to every election, from the biggest to the smallest—making sure that votes count in all election cycles.” The two-party structure of American politics caused this election’s outcome, he said. “I want to try and vote third-party in smaller elections and try and break up this two-party system that way.”

At the party level, Democrats are already turning toward 2018, when they might have a chance to win back some seats in the U.S. House and Senate. But they will be starting with a hurdle: Democratic voters generally don’t turn out in midterm elections. “I’m terrified that people’s anger now, they’re going to cover it because they can’t handle it, and not do anything,” said Katie Caulfield, a 27-year-old south Jersey native. “I’m planning to write myself about how angry I am. … It’s going to arrive at my house the day before midterms, just in case future me has decided to stop doing anything.”

But if these protesters decide to make good on their plans to become local activists, they’ll have to decide whether and how they want to engage with Trump supporters, including trying to win their votes. Especially in politically homogenous, liberal cities like Philadelphia, that could be challenging.

“I don’t think I have anything in common with a Trump supporter,” said Melissa Fernando, a 33-year-old Indian woman from Philly—something a number of protesters said. Others, like Caulfield, said they could identify with Trump supporters who felt politically and economically disenfranchised, and who were voting against the current political system. But “with the other breed of Trump supporter—someone who voted for him because of his platform of hate…” She paused for one beat, then two, then three. “I don’t know. I don’t want to say no because I don’t want to write off a part of humanity.”

Voters from both parties feel they have irreconcilable differences with the other side. It’s not just that progressive activists feel a sense of ideological distance from Trump supporters. Some people felt like their values are fundamentally in conflict. “The divide is so big—even the geographical divide—that we may not be able to start those conversations,” said Elisa McCool, a 32-year-old teacher originally from Texas. “I’m worried that in the current climate, saying something entrenches people in their position.” To this point, Hal Martin, a 27-year-old from Georgia, thought the political work has to start at home. “As a white person, thinking about talking to our families and friends—that’s the best way to go about it,” she said.

In that crowd, Martin seemed to be in the minority. The protesters were angry and looking to be provocative, not conciliatory. One woman in a pair of automechanic overalls proudly held up a sign bearing a massive, glittering sketch of a vagina. “You are the GOP, not God,” the sign read. “Keep your paws and your laws off my pussy.”

It had only been a few days. The protesters’ pain was palpable; Caulfield cried as she described to me how the rest of the world must see the United States in this moment. People told me they were there to figure out what to do next, to express their hurt, to be visible in this moment.

“Not my president!” they chanted—the very phrase people feared hearing from Trump supporters, should they have lost. “I know it’s not going to change things,” said Amy Nassar, a 33-year-old new mom who attended the rally. “But it makes me feel better.” 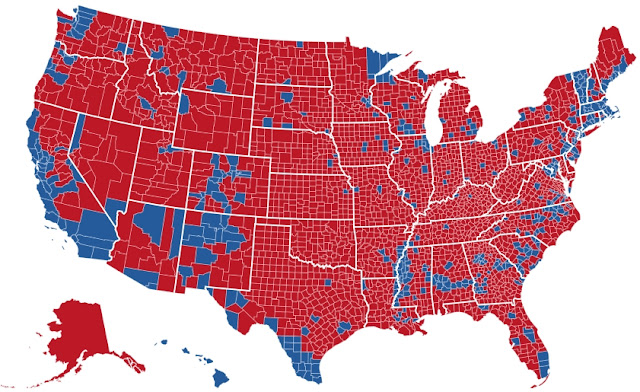 Islands of Blue In a Sea of Red

Fifty-five point seven million out of the 109.3 million Americans who cast their ballots in those counties voted for Trump, while only 48.1 million voted for Hillary Clinton, according to the latest county by county election results reported at Politico. The remaining 5.4 million voted for other candidates.

Trump’s 7.5 million popular vote landslide in America’s heartland, a resounding 7 point victory in those 3,084 counties over Clinton, 51 percent to 44 percent, gave him a 306 to 232 Electoral College landslide. (On Monday night, the director of elections in the office of Michigan’s Secretary of State said that Trump had won the state’s 16 electoral college votes by a narrow margin of 13,107 votes.)

Hillary Clinton, in contrast, had an 8.2 million vote margin in a narrow band of 52 coastal counties and five “county equivalent” cities stretching from San Diego to Seattle on the West Coast and Northern Virginia to Boston on the East Coast. That narrow band included two major cities–Washington, D.C and Baltimore, Maryland–included in the five “county equivalent” cities, and three major cities–Philadelphia, New York, and Boston–which are included in the 52 counties.

In elite coastal county after elite coastal county, especially those in Washington, D.C. and its Virginia and Maryland suburbs where so many federal government workers and federal contractors live, Clinton won by margins ranging from four to one to two to one.

In contrast, the 3,084 counties in America’s heartland, where Trump dominated with a healthy 7 point margin, accounted for 85.6 percent of all votes cast.

Clinton’s 671,066 popular vote margin across the entire country, 61,047,027 votes to Donald Trump’s 60,375,961 votes (according to Politico’s election results website as of Tuesday morning) arose from this huge advantage wracked up in these elite coastal counties.

Trump campaigned very little in the 23 elite coastal counties in the West Coast states of California, Oregon, and Washington, and only vigorously campaigned in five Northern Virginia counties and Philadelphia on the East Coast.

It is worth noting that virtually all members of the mainstream media reside within this narrow band of elite coastal counties.

But these nine states experienced the same kind of bimodal divide seen in the rest of the country.
In eight of these nine states (all but Massachusetts) Trump was tied or slightly ahead of Clinton in the popular vote in those counties outside the coastal elite.

Here is the full list of these 52 elite coastal counties: