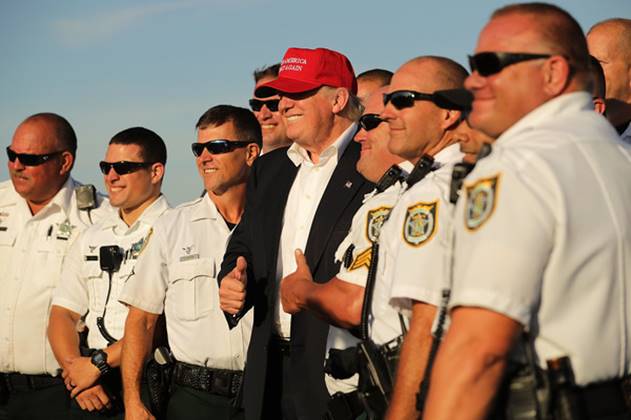 
Among voters who are certain how they will vote, Trump now has over 50% support.


Clinton and Trump have been tied for the previous two days.


Trump holds a double-digit lead among unaffiliated voters, but these voters are also the most likely to say they could still change their minds.


The GOP candidate still leads among men, while the two are in a near tie among women.


Clinton remains well ahead among those under 40, while older voters continue to prefer Trump by similar margins.


Younger voters are still the least sure of how they will actually vote.


Trump holds his lead among whites but continues to be far behind among black and other minority voters. Whites are the most certain of their vote.


The majority of all voters consider the allegations of sexual harassment by multiple women against Trump important to their vote.  But women (10%) are even less likely than men (14%) to say the allegations have caused them to change their vote.


Clinton is the first woman presidential nominee of a major U.S. political party, but most voters, including the vast majority of women, insist that won’t make a difference when they cast their vote.


MORE POLL NEWS:
Some voters who cast their ballots in 2008 for Barack Obama because they viewed him as a change agent are doing the same in 2016 by voting for Donald Trump.


It didn’t take long for Jack Morris to regret voting for President Obama. A few months after Mr. Morris, a lifelong Republican, cast his first vote for a Democrat in 2008, he learned that the carpet company where he worked planned to lay off 36 people in Pennsylvania and move his job to Maryland.


Mr. Morris is one of a small subset of voters who supported Mr. Obama in 2008 and have now embraced Mr. Trump, attracted by his vow to shake up the political status quo and restore lost jobs.


In Colorado, a new poll shows Hillary Clinton’s lead in the state has completely evaporated amid the fallout from new FBI revelations in her email scandal.


Hillary Clinton and Donald Trump are tied in Colorado, a new poll shows, entering the final days of the 2016 presidential race.


The University of Denver poll released Wednesday found Clinton and Trump deadlocked at 39 percent in a four-way race, in a survey of registered likely voters conducted Saturday through Monday.


Floyd Ciruli, a veteran Colorado pollster who conducted the survey, said the numbers are “reflective of the fact that this environment has turned negative for Clinton,” notably the FBI inquiry into additional e-mails with possible ties to her tenure as secretary of state.


In Florida, the early vote trend is favoring Republicans.


Six days before Election Day in 2012, Democrats in Florida had cast about 39,000 more votes than Republicans.


The bottom line, Democrats in Florida so far are performing worse than expected and Republicans better.


In New Hampshire, a new poll shows Hillary Clinton’s lead in the state has completely evaporated.


A new WBUR poll of likely voters in New Hampshire finds that Republican Donald Trump and Democrat Hillary Clinton are now in a dead heat with just five days to go before Election Day.


The survey also finds Republican Sen. Kelly Ayotte leading her Democratic challenger, Gov. Maggie Hassan, by 6 points in one of the key races that could determine which party will control the U.S. Senate.


In Ohio, Hillary Clinton trails by five points in the latest Quinnipiac poll.


While Trump's lead is within the poll's margin of sampling error, it also parallels two other recent public polls that also found Trump with a 5-point lead here.
Compiled by the RNC.
Posted by Frances Rice at 2:37 PM