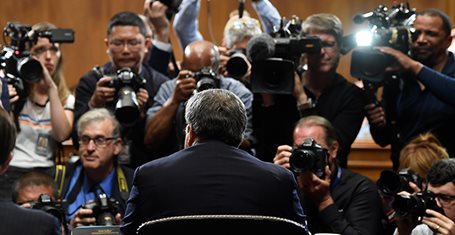 A number of Democratic lawmakers are calling on Attorney General William Barr to resign from office over his handling of the Mueller report's release, and his answers before Congressional committees on the subject.  These demands are baseless, partisan nonsense.

Barr has comported himself properly and honorably, fulfilling the two core promises he relayed to Senators during his confirmation hearings: First, that the Russia probe would be permitted to play out without interference, and second, that he would make Mueller's findings available to the public in the most transparent way possible.  He's betrayed neither of these promises.

Mueller completed his work without any limitations, and 92 percent of his final report has been accessible to the American public for weeks.  The balance of the document is blacked out with uncontroversial redactions, made in concert with Mueller's team, with certain members of Congress having access to an even less-censored copy.

Bizarrely, the thrust of the fury at Barr is focused on his original summary of Mueller's bottom-line findings, which has since been supplanted by the report itself.  Democrats have charged that Barr misrepresented what Mueller found in order to establish a narrative that helped President Trump -- a complaint they say was echoed by Robert Mueller in a leaked letter to Barr.

It's true that Mueller expressed concerns about Barr's memo, which Mueller wrote did not "fully capture the context, nature and substance" of the probe's results.  But Barr's letter was never intended to "fully capture" anything; it was meant to convey the report's bottom line legal findings.

Nevertheless, as a result of the letter, Barr and Mueller spoke on the phone, leading to this exchange, reported by the Washington Post: Mueller thought Media coverage was distorting the the obstruction portion of the investigation.

In sworn testimony today, Barr reiterated that Mueller was "very clear" that Barr's memo was not inaccurate, instead stating his worries about the media narrative that was taking root.

In that original letter, Barr stated that the Special Counsel's report (1) did not find conspiracy or coordination between any members of the Trump campaign and the Russians, (2) laid out evidence on both sides of the obstruction of justice issue, and (3) did not reach a determination on obstruction charges either way, adding that this lack of a decision did not constitute an exoneration (a key distinction that Barr included in his memo).

All of that was correct and accurate.  We know this because we have the report itself, thanks to Barr.

Remember, the disclosure of said report was totally at the discretion of the Attorney General, who was Mueller's boss.

Barr testified today that based on the necessary redaction process (undertaken alongside members of Mueller's team, including portions of the document's executive summaries), it was determined that there would be a "three-to-four week gap" between his publicly-reported receipt of the report and a realistic publication date.

Rather than making the American people wait around for a month -- which would certainly have raised a stentorian hue and cry -- Barr exercised his judgment and chose to write his relatively short memo, as opposed to releasing bits of the report on a piecemeal basis.

It's now clear that this was not Mueller's preference, but it was also not Mueller's decision.  It was Barr's, and Barr's choices were entirely defensible.
Some overarching key points:

First, Barr's memo was accurate.  Even if one believes that he somehow "downplayed" Trump's malfeasance, he did state that there was a fair amount of evidence offered on the obstruction question, and that Mueller explicitly said that his team offered no exoneration on obstruction (again, a quote Barr included in his initial letter).

Second, due to Mueller's punt on obstruction charges, that decision was left up to the Attorney General and his top deputy, a man (Rod Rosenstein) who established and protected the Special Counsel's investigation from its onset, often drawing the ire of the president and his allies.

Barr and Rosenstein's call against a prosecution was sound -- or at the very least, entirely defensible: The probe was not ultimately obstructed, and there was no underlying 'collusion' crime to cover-up.  Criminal intent would therefore be very difficult to prove.

Finally -- once more, for the people in the back -- we have the Mueller report.

If we were squabbling about competing summaries of a document that remained shrouded in mystery, that would be one thing.  I'd be much more troubled, frankly.  But that's not what's happening here.  Barr defenders can say that his original letter was appropriate and accurate; Barr detractors can say the exact opposite.  But now we all have the full, lightly-redacted underlying document to assess and analyze, and we've done so.

Toward the end of his prepared opening remarks earlier, Barr stated the following: “From here on, the exercise of responding & reacting to the report is a matter for the American people & the political process.”

This is absolutely right.

Mueller found no collusion, and reached no conclusion on obstruction, effectively leaving that call to his superiors.

If Democrats are convinced that Barr's call was the wrong one, and that the president is guilty of obstructing justice, they can get off their rear ends and pursue impeachment.

House Democratic leadership has indicated no appetite for doing so.  But that's a political judgment and it's theirs to make, now that the legal questions have been put to bed.

As for Mueller, here is Andrew McCarthy's fairly scathing review of his letter to Barr, and the media coverage.

Before Attorney General Barr issued his letter outlining the special counsel’s conclusions, Mueller was invited to review it for accuracy. Mueller declined. After Barr explained that Mueller had not decided the obstruction question, the press reported on this dereliction. Mueller is miffed about the press coverage … but he can’t say Barr misrepresented his findings. Like the Mueller investigation, this episode is designed to fuel a political narrative. But we don’t need a narrative – we don’t even need anyone to explain the report plainly. That’s because we now have the report. We can read it for ourselves. The rest is noise.

The first sentence in that excerpt is worth repeating and highlighting, given the nature of the latest contretemps.

Barr derangement — nonsensical claims of cover-ups & “perjury” etc. — is a baffling fixation on the Left. One can’t help but wonder if they’re trying to preemptively disqualify whatever damaging findings he may uncover about elements of the original probe’s provenance.


This is also a relevant reminder, in light of the supposed “outrage” du jour: Barr offered Mueller a chance to review his summary memo prior to its release & Mueller declined. Mueller later confirmed that Barr’s letter was not inaccurate.

Lastly, let's drill down on another important issue: Some Democrats are claiming that Barr perjured himself in two previous exchanges before Congress. He did not.

Rep. Charlie Crist of Florida asked him a very specific question about frustrations aired in the press by unnamed Mueller associates.

Barr answered that he didn't know what those specific frustrations were, which was obviously and definitionally true because they were leaked anonymously and vaguely.

He knew what Mueller's concerns were, as the two men had spoken about them over the phone.

Rightly pleading ignorance about the former category of gripes is not inconsistent with being fully aware of the latter concerns. This not in the ballpark of perjury.

The other claim is that Barr said he didn't know whether Mueller "supported" his conclusion on obstruction. There is no contradiction here either.  Mueller didn't comment on Barr's obstruction conclusion.