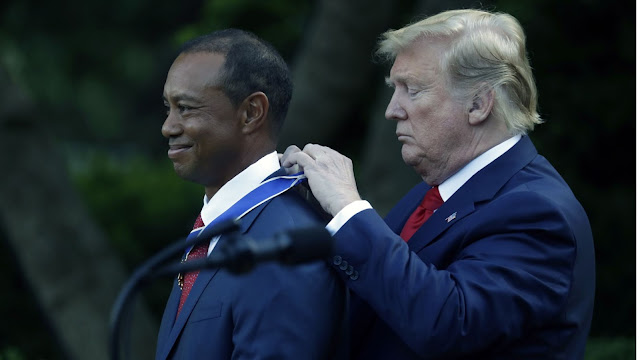 "Tiger, we are inspired by everything you've become and attained. The job you've done is incredible," Trump said to Woods. "Your spectacular achievements on the golf course, your triumph over physical adversity and your relentless will to win, win, win; these qualities embody the American spirit of pushing boundaries, defying limits and always striving for greatness."

Trump, an avid golfer who played with Woods at the president's golf club in Florida this past February, also referred to Woods as "a true legend, an extraordinary athlete who has transformed golf and achieved new levels of dominance."

During the ceremony, the president recounted highlights of Woods' career in detail... Both men were clad in blue suits and red ties, matching Woods' traditional Sunday apparel on the golf course.

At one point, Trump recognized Woods' mother, girlfriend, children and caddie, all of whom were in attendance, and paid tribute to Woods' late father, Earl, calling him "a very special guy also."

"He was tough, Tiger, wasn't he?" Trump asked Tiger about Earl Woods.
"Not as tough as her," Woods cracked in response, pointing out his mother, Kultida.

Woods is the fourth golfer to receive the Medal of Freedom. Then-President George W. Bush presented the honor to Arnold Palmer and Jack Nicklaus in 2004 and 2005, respectively. Then-President Barack Obama gave the Medal of Freedom to Charlie Sifford, the first African-American to join the PGA Tour, in 2014. In his remarks Monday, Woods mentioned that he had named his 10-year-old son Charlie after Sifford, whom he referred to as "like the grandpa I never had."

"This has been an unbelievable experience and ... everyone here has seen and been with me for them, some of you for my entire life, and some of you for more than half my life," Woods said. "You've seen the good and the bad, the highs and the lows and I would not be in this position without your help."

Trump announced that Woods would receive the Presidential Medal of Freedom last month after Woods won the Masters Tournament. It was the 43-year-old Woods' first victory at Augusta National since 2005 and his first major title since 2008.

"I tried to hang in there and I tried to come back and play the great game of golf again," Woods said. "I've been lucky enough to have the opportunity to do it again, and ... the amazing Masters experience that I just had a few weeks ago is probably the highlight of what I've accomplished so far in my life on the golf course."

Woods and Trump are longstanding business associates. Golfers at Trump's club in Doral, Fla., can stay at the Tiger Woods Villa. At a ribbon cutting ceremony in 2014, Woods lavished praise on the future presidential candidate, calling changes he made to the club "phenomenal."

In Dubai, Woods designed an 18-hole course to be managed by The Trump Organization.

The Trump Organization has "repeatedly demonstrated their ability to successfully manage unique, high-end courses and golf clubs, and this is no exception," Woods said in a 2018 interview in the company's in-house magazine.

Trump has used Woods' cachet to attract fans to his properties for decades.

Trump got Woods to show up at his Taj Mahal casino in Atlantic City, N.J., a day after the golfer's first Masters victory in 1997. Two thousand fans showed up as Woods walked down a 320-foot red carpet, some of them storming steel barricades to get a closer look.
....

The Medal of Freedom ceremony was the second sports-related event to be held at the White House Monday. Earlier in the day, Trump presented the Commander in Chief's Trophy to the Army football team to mark its wins over Air Force and Navy this past season.

Fox News' Ryan Gaydos and The Associated Press contributed to this report.

https://www.foxnews.com/sports/trump-tiger-woods-presidential-medal-of-freedom
Posted by Frances Rice at 9:14 AM