The Gang of Five and the Pseudo Impeachment of President Donald J. Trump 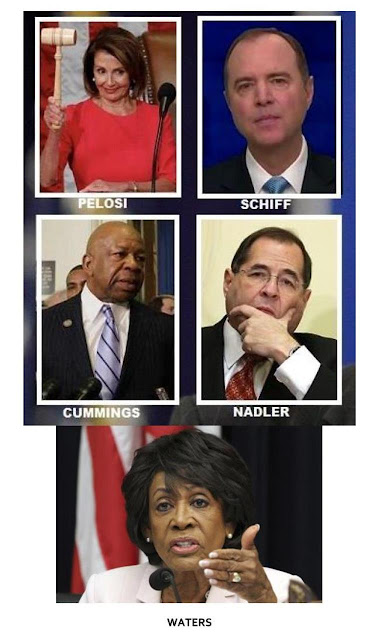 The Gang of five.

Five powerful Congressional Chairmen and Chairwomen who control the Democratic Caucus, (3) from California ,(1) from New York and (1) from Maryland all from Democrat ‘safe’ Districts who received a total of approximately one million votes will decide whether to impeach and try to remove President Trump from office, a duly elected President that received approximately sixty three million votes.

The following are the votes counts for these five Congressmen and Congresswomen:

President Trump’s 63,000,000 voters could be disenfranchised by five powerful Democratic Congressmen and Congresswomen.

Even if they are unable to convict the President they could bring the wheels of government to a halt. Their threats and spurious investigations have to a great extent already done this.

In 2018 Republican and Democratic voters gave the Democrats control of the House of Representatives believing that a Democrat controlled House would address America’s real issues. They were sent there to resolve issues that affect every man, woman and child in America.

The Tyranny of the Gang of Five

The gang of five consists of the following four House Chairmen and Women and the Speaker who come from ‘safe Democratic seats’: Pelosi, Cummings, Shiff, Nadler and Waters.

These five people literally control the Democratic caucus and thus control the total agenda of Congress. Instead of doing the business of the voters they are proceeding with a Pseudo Impeachment because they have no evidence of any ‘high crime or misdemeanor’ by Trump. For these five it is a matter of power and control — the voters business be damned.

They are like five angry pit-bulls who can’t give up the bone.

The tyranny is that the Gang of Five together got about 1 million votes out of a total Presidential vote of approximately 123 million votes (less than 1%) and they have the power and audacity to conduct a Pseudo Impeachment or possibly a real Impeachment in the future without regard for the voters or the country. In drafting our Constitution our forefathers never contemplated that five ‘professional’ politicians with less than (1%) of the vote could stymie the will of all voters. But that is what is happening.

This is no joking matter.

The issue of Trump ‘collusion’ with Russia and then “obstruction of justice’ were to be resolved by the Robert Mueller Special Counsel investigation.

No collusion and no obstruction was found.

Instead of moving on the Democrats continue to rehash a closed investigation and are continuing with a Pseudo Impeachment against President Trump and now a Contempt Order against Attorney General Bar.

In the case of AG Barr they have found him in contempt of Congress for failing to make public a limited amount of redactions, which he is not permitted to release to the public by law.

Nevertheless at an interview Speaker Pelosi said to interviewer Costa…

COSTA: “How far can you go on that front, Speaker Pelosi? Could you hold the Secretary of Treasury Steven Mnuchin in contempt? Some Democrats have even raised the prospect of arresting the Treasury secretary if he does not comply with congressional demands?”

PELOSI: “Well, let me just say that we — (Applause) — we do have a jail down in the basement of the Capitol. (Laughter) But if we were arresting all of the people in the administration — (Laughter) — we would have overcrowded jail situation, and I’m not for that. But I think again, getting to the committee, Richie Neal, the chairman of the Ways and Means Committee, he has a path — again all of this is so low and precedent-based to do the right thing as we go forward. And there are several options. One of them is to go directly to court.”

COSTA: “So it’s probably going to be settled in court?”

PELOSI: “We will see what the chairman announces because that’s the way we do it.”

Read what the Wall Street Journal says: The Pseudo-Impeachment

Democrats hold show trials rather than vote to oust the President.

House Democrats are escalating their campaign against the Trump Administration with complaints that its resistance to Congressional requests for documents is a threat to democracy. It’s more accurate to say that Democrats are performing what amounts to a pseudo-impeachment so they don’t have to undertake a real one.

Democrats are agonizing over impeachment because while they’re itching to do it, special counsel Robert Mueller’s report blew up their Russian collusion hopes.

He also took no position on obstruction of justice while reporting a highly critical “analysis” of President Trump’s actions. Democrats now find themselves caught between a left-wing base that says they’ll abdicate their duty if they don’t impeach and Speaker Nancy Pelosi’s cold-blooded calculation that it could cost their majority in 2020.

What to do? Democrats have decided to act out a pseudo-impeachment that claims Mr. Trump and his Administration are committing offenses against the Constitution without daring to open a formal impeachment inquiry. The split-level goal is to appease the left while sparing the swing-district Democrats who delivered the 2018 majority from ever having to vote on articles of impeachment.

House Democrats Show Their Contempt for Constitution, Rule of Law

The Injustice of the Left’s Fury Against Barr
Posted by Frances Rice at 10:11 AM