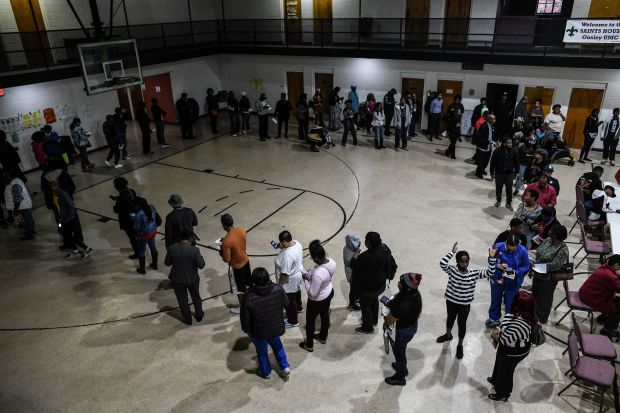 Minority turnout surged in 2018, notably in Georgia and Florida.

But then how do they explain record minority turnout last November? If Republicans were trying to stop minorities from voting, their schemes were inept.

The number of Latino voters nearly doubled in last year’s midterms compared to 2014 and came close to presidential year levels, according to a Pew Research Center analysis of new Census Bureau data.

The minority turnout surge benefited Democrats who picked up 40 House seats, seven governorships and six legislative chambers. But Democrats still blame their defeats in the Florida and Georgia gubernatorial races on voter suppression.

Georgia law requires voters be removed from the rolls if they haven’t cast a ballot in three years and don’t respond to an inquiry in the mail to confirm their address. Another law requires voter information in registration applications to mirror information on file at the Georgia Department of Driver Services and Social Security Administration.

White voter registration increased by a mere 0.7 percentage points to 66.8%. Pruning the rolls also didn’t reduce black turnout. Nearly 60% of blacks voted last fall—up from 43% in 2014—compared to 56% of whites.

Like Democrat Stacey Abrams in Georgia, Florida Democrat Andrew Gillum blamed his loss for the governorship on GOP voter intimidation.

According to exit polls, Mr. Gillum underperformed former Democratic Sen. Bill Nelson among black women by nine points, perhaps because of his vocal opposition to school choice. This may have cost him the election.

Democrats also claim that reducing early voting discriminates against minorities, but Hispanics were as likely as whites to cast early ballots last fall.

Blacks were most likely to vote on Election Day.

Higher incomes and education levels were associated with early voting. So was age.

Limiting early voting inconveniences folks who are more likely to be Republican.

There’s also no evidence that voter ID requirements suppressed minority turnout. After the 2016 election, Missouri and Iowa adopted such laws to prevent voter fraud. Black turnout increased in both including by a stunning 21 percentage points in Iowa.

Democrats howl about voter suppression to portray Republicans as racist to stoke minority turnout for Democrats. It’s a divisive form of politics. Their losses in Florida and Georgia suggest that inflaming racial resentment may turn off voters they need to win.