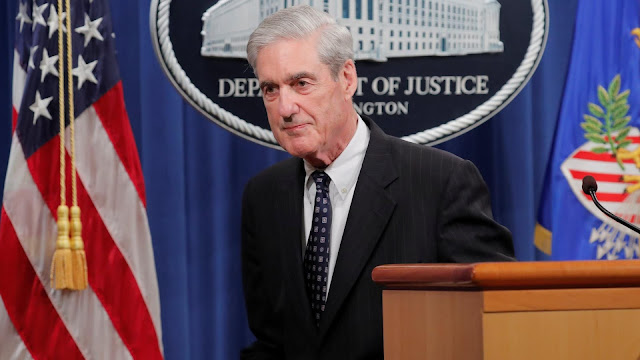 Special Counsel Robert Mueller speaks to the media about the results of the Russia investigation at the Justice Department in Washington, D.C., May 29. PHOTO: JIM LO SCALZO/EPA-EFE/SHUTTERSTOCK

Robert Mueller is an honorable man, as Marc Antony might have put it. And in his public statement Wednesday we saw a special counsel who went out of his way not to absolve Donald Trump and may have put his thumb on the scale toward impeachment.

Mr. Mueller offered no new facts about his probe at a press appearance in which he read a statement and took no questions. The event was mainly intended to deflect bipartisan requests that he testify on Capitol Hill about his 448-page report on Russia and the Trump campaign. He may have succeeded in that deflection, but not without taking revenge on the President who has criticized his probe.

The special counsel said the Russians he indicted for interfering in the 2016 election are innocent until proven guilty. About Mr. Trump he said only that “there was insufficient evidence to charge a broader conspiracy” between the Trump campaign and Russia.

Yet as his report shows beyond doubt, there is no evidence of a conspiracy, broad or narrow. His report recounts a series of contacts between individual Russians and Trump officials that were of no great consequence and are connected by nothing more than coincidence. Mr. Mueller should have said this clearly on Wednesday.

Regarding obstruction of justice, Mr. Mueller suggested that the reason his office reached no prosecutorial decision is because Justice Department rules don’t allow the indictment of a President while in office. “Charging the president with a crime was, therefore, not an option we could consider,” he said Wednesday.

He thus left it hanging for everyone else to infer whether he would have indicted Mr. Trump if he were not a sitting President. And he left Attorney General William Barr to take responsibility for reaching the prosecutorial judgment that Mr. Mueller refused to make. Mr. Mueller added to this sneaky anti-Trump implication by noting that “the Constitution requires a process other than the criminal justice system to formally accuse a sitting President of wrong doing.” What else could he mean but Congress and impeachment?

Yet Mr. Mueller’s analysis of the obstruction evidence in his own report makes clear that no investigation was obstructed. Not the FBI’s counterintelligence probe, and not his own. No witnesses were interfered with, and Mr. Mueller was allowed over two years to issue nearly 500 search-and-seizure warrants and interview anyone he wanted, including anyone in the White House.

Mr. Trump sometimes showed his exasperation, and bad judgment, in suggesting to more than one adviser that Mr. Mueller be fired, but no one acted on it. The special counsel probe rolled on without interference. Yet on Wednesday Mr. Mueller would only say that “if we had had confidence that the President clearly did not commit a crime, we would have said so.” Since when do prosecutors make it their job to pronounce whether someone they investigate is exonerated? Their job is to indict, or not, and if not then keep quiet.

Mr. Mueller finished his statement with an ode to “the attorneys, the FBI agents, and analysts, the professional staff who helped us conduct this investigation in a fair and independent manner.” These individuals, he said, “were of the highest integrity.”

Does that include Andrew McCabe, the former deputy FBI director who is being investigated for lying to investigators? Does he mean Peter Strzok and Lisa Page, the FBI paramours whose antipathy for Donald Trump is obvious from their text messages? Mr. Strzok was part of Mr. Mueller’s investigating team until those texts were discovered.

Does Mr. Mueller also mean the FBI officials who used the politically motivated, and since discredited, Steele dossier to persuade a Foreign Intelligence Surveillance Court to issue a warrant to spy on Trump adviser Carter Page? Mr. Mueller didn’t appear to want to investigate that part of the Russia story. Was that behavior of “the highest integrity”?

Mr. Mueller would have better served the country and his own reputation if he had simply done what he claimed he wants to do and let his report speak for itself. Instead he has weighed in for the Democrats who want to impeach the President, though he doesn’t have to be politically accountable as he skips town. This is the core problem with special counsels who think they answer only to themselves.

House Speaker Nancy Pelosi isn’t as fortunate. The media and backbench pressure will now build on her to open an impeachment inquiry to charge Donald Trump with obstructing an investigation that wasn’t obstructed into a conspiracy that didn’t exist. Unlike the honorable Mr. Mueller, House Democrats will be accountable at the ballot box in 2020.