Yes, a new study says. Time to take artificial caps off their success.


By The Editorial Board |   The Wall Street Journal 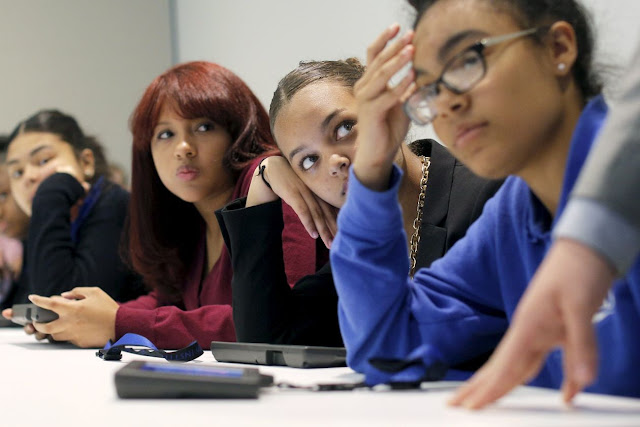 High school students from the City on a Hill Charter Public School play the role of U.S. senators as they work to pass an immigration reform bill during a mock legislative session of the U.S. Senate chamber at the Edward M. Kennedy Institute in Boston, Massachusetts June 10, 2015. PHOTO: BRIAN SNYDER/REUTERS

One critique of charter schools is that while a few energetic principals show success, it’s impossible to replicate. Not so, says a new study of Boston’s charters, which doubled from 16 schools to 32 in four years, even as they maintained their effectiveness.

“It appears that proven providers successfully transmitted hiring and pedagogical practices to new campuses,” the authors write in a working paper posted last week by the National Bureau of Economic Research. “Expansion charters generate achievement gains comparable to those of their parent schools.”

This is great news, especially given the magnitude of the extra learning: A year of attending one of these charter spinoffs, the study suggests, improves math scores by an amount equivalent to about 40% of the “achievement gap” between Massachusetts’ black and white students.

The paper’s authors, three professors of economics or education policy, explain what happened after Massachusetts raised its charter cap in 2010. The state set rules encouraging successful charter schools—deemed “proven providers”—to seed new campuses. Most follow a “no excuses” framework, with high expectations and a low tolerance for misbehavior.

After the cap was lifted, growth came rapidly. By 2015 the share of Boston’s sixth-graders attending a charter school had risen from 15% to 31%. Yet applications increased even faster, to the point that there were two hopefuls for each open seat. Oversubscribed charters award admission by lottery, which randomizes the results. “Comparing the outcomes of students who receive lottery offers to those that do not,” the authors write, shows “large positive impacts of charter attendance on test scores.”

Notably, the charter spinoffs were equally successful “while enrolling students that appear more representative of the general Boston population.” Compared with peers at Boston Public Schools, these pupils had lower previous test scores, were more likely to qualify for subsidized lunch and had similar rates of special needs and limited English.

Further, the charter teachers were mostly rookies. At spinoff schools, 87% were under the age of 32, and they averaged only 1.4 years of experience. Compare that with 11.5 years in Boston Public Schools. So how did the charters succeed? They used “a highly standardized model that limits variation in practices across schools and classrooms.” The effect was to “reduce returns to experience and compress the distribution of teacher effectiveness.”

With results like these, politicians should be fighting to help charters expand to meet the demand. But charters are public schools that operate independently and often free of union constraints, and that makes them a political target. In Boston, charter schools are capped at 18% of the district’s spending, which has left more than 8,000 students on a waiting list.

A Massachusetts referendum in 2016 would have allowed the state to authorize 12 new charters a year outside these spending caps. Unions backed a scare campaign saying this would “siphon” money to “a select few,” as if Boston’s predominantly poor and minority charter students needed to check their privilege. Sen. Elizabeth Warren, a supposed champion of the dispossessed, opposed the ballot measure. It failed, 62% to 38%.

The story is similar in New York and other states with charter caps. Rather than welcoming student achievement at competing schools, teachers unions are trying to stop the success from spreading. They care about their power and money, not students.