Progressives keep taking black voters for granted — at their peril 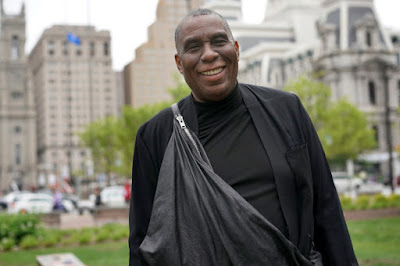 PHILADELPHIA — Maurice Floyd is tired of liberal intellectuals who insist on speaking for all black voters.

“They want us to fit into their mold,” said the veteran political operative. They “don’t dig deep down to really find out what is really on the consciousness of African-Americans.”

Because black voters tend to overwhelmingly vote Democrat, candidates and pundits often assume they share the same views as progressives, supporting third-trimester abortions, the Green New Deal and Medicare for all, Floyd said.

The most recent Pew survey of Democratic voters shows just that. Black voters characterize their values as more moderate than liberal, with 40 percent of black Democrats calling themselves moderate, 30 percent conservative and only 28 percent liberal.

It’s a stark contrast to white voters in their own party, where 55 percent of white Democratic and Democratic-leaning registered voters identify themselves as liberal, while 35 percent describe themselves as moderate and only 8 percent as conservative.

Joann Bell, who once served as the Pennsylvania governor’s executive director on African-American affairs, said black voters are especially more conservative when it comes to economic issues. Everyday concerns like being able to put food on the table will usually come before more global causes, such as fighting climate change
.
“Not everybody,” Bell said, “has the luxury of being progressive.”

So far, among the 21 Democratic candidates in the primary field, some have openly embraced the progressive label while others have danced around it, but only one — Joe Biden — has avoided being boxed into any kind of designation.

So it shouldn’t surprise anyone that black Democratic voters overwhelmingly back him as their candidate right now. According to a March Quinnipiac poll, Biden holds 44 percent support from black voters, giving him a double-digit advantage over his nearest competitor, Bernie Sanders.

No one is suggesting that black voters will suddenly support Donald Trump for president, but if they’re not enthusiastic about a candidate, it could depress turnout at the ballot box and help get Trump re-elected.

In 2016, according to an analysis from the Washington Post, Clinton saw at least a 10 percent decline in vote totals in most counties with a nonwhite majority nationwide — such as Philadelphia County — compared to Obama in 2012. In a fifth of these counties, Republicans actually saw a small gain in votes.

He points to the fact that a white candidate, Jim Kenney, beat a black candidate, Anthony Williams, in the race for mayor of Philadelphia in 2015, even though nearly 44 percent of the city’s population is black.

“I think African-Americans pretty much want what everybody else wants: access to good health care, jobs, a good education, a home and a safe community,” Clarke said.

Currently, there are three black candidates running for president in the Democratic primary. Though Clarke has not officially endorsed anyone in that race, he admits he is leaning strongly towards one candidate.

“It’s likely going to be Joe,” he said. “I haven’t made an official decision yet. But I know Joe Biden quite well.”

Kenyatta said he wants to prioritize issues that impact his district over identity politics.

“People in my community are practical,” he said. “I certainly consider myself to be a progressive, but when I go home people want to know [if] I am working with my Republican colleagues to get things done. It is a constant question I get, and I think they care a lot less about whether or not folks are ‘politically pure.'”

Floyd, who has never worked for Biden, said many of the Democratic presidential candidates are running on issues that voters aren’t even thinking about, such as restoring voting rights to the Boston Marathon bomber.

“Let me put that in perspective,” he said, recalling a mayoral forum on gentrification and guns held in Philadelphia recently. “They asked the people in the room whose kids or relatives were killed by guns to stand up. I swear almost everybody in the place stood up. It was so heartbreaking.”

It’s unlikely that any of those constituents would want to restore voting rights to the person who killed their family member, said Floyd.

A candidate like Biden understands this sentiment, he added, and that’s why he’s likely backing him for president.

Salena Zito is the author of “The Great Revolt: Inside the Populist Coalition Reshaping American Politics” (Crown Forum), out now. 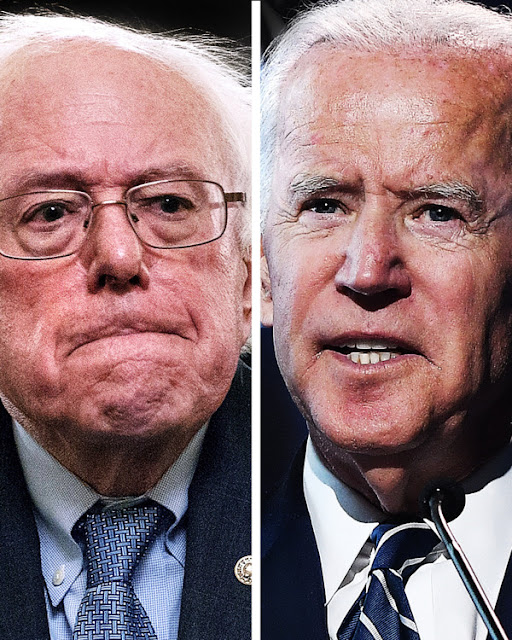 Joe Biden was quick to fall in line with the radical left by saying that he wants illegal immigrants who have paid NOTHING into the system get the same Medicare and Medicaid coverage as Americans who have spent their entire working lives paying into the system.

So to sum up 2020 Democrats’ health care agenda: rip nearly 200 million people off of their current health insurance plans while making sure illegal immigrants are covered.

WATCH: Biden Says We're Obligated To Give Healthcare To All "If They Are Documented Or Undocumented”

Biden’s plan is entirely unfair to the average American citizen who pays approximately $40,000 in Medicare taxes by the time they are eligible to use the coverage they spent decades paying for.

This is not a fringe issue for Democrats. The Washington Post notes that Booker, Castro, Gillibrand, Harris, Sanders, Swalwell, Warren, and Yang all want illegal immigrants to get government run healthcare.

And hypocritical as ever, Pete Buttigieg is all for illegal immigrants getting government-run health care BUT don’t ask him if he is offering health care to his campaign staff. 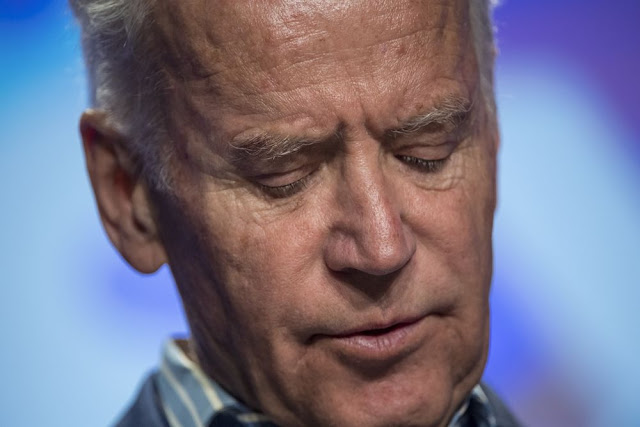 Once upon a time, May 1 (May Day) was a day for working-class parades in factory towns. This year, it was a day for Joe Biden, setting off on his third presidential campaign in 32 years, to make news on the stump — not in a working-class venue but in the university town of Iowa City, now the state’s Democratic stronghold.

Biden’s claims for the presidency rest heavily on foreign policy expertise gained in eight years as vice president and 34 years on the Senate Foreign Relations Committee. Unusually for a Democratic candidate this cycle, he chose to speak about China. “China is going to eat our lunch?" he asked rhetorically. "Come on, man. They can’t even figure out how to deal with the fact that they have this great division between the China Sea and the mountains in the west. They can’t figure out how they’re going to deal with the corruption that exists within the system. They’re not bad folks, folks, but guess what? They’re not competition for us.”

“This will not age well,” tweeted Sen. Mitt Romney, R-Utah, in reply. He surely remembers how Barack Obama ridiculed him in the final 2012 presidential debate for bringing back the foreign policy of the 1980s by characterizing Russia as our “number one geopolitical foe.”

It turns out Romney had a point then, and he has one now. Biden’s foreign policy views on China seem to be stuck in the 1990s. Those were optimistic times, with the Cold War won and no geopolitical foe in sight, with a surging U.S. economy complete with budget surpluses. It was “the end of history,” in scholar Francis Fukuyama’s phrase, when it seemed that something like the American-style democracy, human rights, and dynamic capitalism would sweep the globe.

That included China. The mechanism to make it so was to bring China into the world trade system, a proposal supported by the Clinton administration, George W. Bush, and most congressional Republicans. In 2000, permanent normal trade relations with China passed the House, 237-197 in May and the Senate 83-15 in September. Opposition came largely from labor Democrats and from members like Reps. Chris Smith, Frank Wolf, and Nancy Pelosi concerned chiefly with China’s human rights abuses.

The widespread assumptions were that the international trade framework would lead China to respect international norms and encourage the Chinese people to demand (and the Chinese government to advance) democracy and human rights. Increased trade, it was hoped, would produce economic growth here, just as the opening trade with Japan and Mexico had seemingly done.

China has consistently cheated on trade rules and intellectual property rights. And while increased trade with China has indeed contributed to American economic growth, it has also cost far more American jobs than respected experts predicted.

Chinese imports as a percentage of U.S. economic output doubled within four years, MIT economist David Autor reported in 2016. “We would conservatively estimate that more than 1 million manufacturing jobs in the U.S. were directly eliminated between 2000 and 2007 as a result of China’s accelerating trade penetration in the United States,” in markets ranging from clothing to jewelry, toys to furniture, he wrote.

Hopes for democratization and human rights have also been dashed. When Congress voted on China trade, Russia had been holding free elections, and Vladimir Putin was serving his first year as president. Now his reign is scheduled to extend to the 2020s and maybe beyond. China has become ever bolder in its suppression of human rights and any demand for anything like free elections. Chinese President Xi Jinping has even discarded the term limits imposed on his predecessors.

With economic growth slowing down, China’s leaders are evidently relying on expansionist nationalism to rally popular support. They have built and fortified islands in the South China Sea to claim sovereignty over its sea lanes and have expanded their capacity to nullify U.S. weapons systems. As former Trump Pentagon aide Elbridge Colby writes in Foreign Policy, “If the United States delays implementing a new approach, it risks losing a war to China or Russia—or backing down in a crisis because it fears it would.”

The hopes for a cooperative and peaceful China have unfortunately been dashed. But for Joe Biden, it’s evidently still the 1990s. Is this the best the Democrats can do?