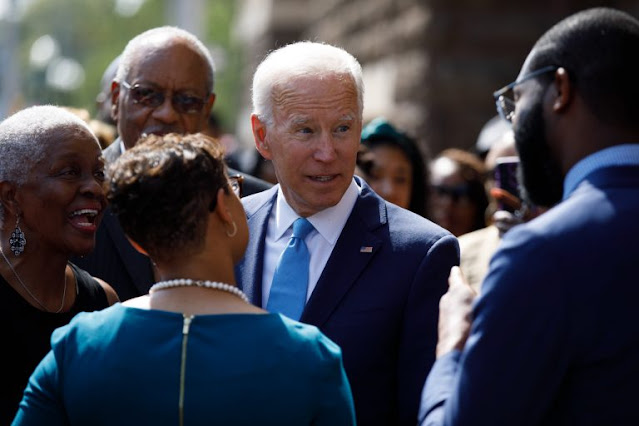 If President Joseph Biden’s administration were considered a corporation, their key executives—Biden, Vice President Harris, and chief of staff Ron Klain would all be in jeopardy of going to jail.

Biden has been president for more than six months now and he is in default of a declared dividend he made to his shareholders, especially his largest shareholder, the Black community.

But this is nothing new.  Democrats in general and Biden in particular, have constantly reneged on paying declared dividends to their Black shareholders.

I have a degree in tax accounting from Oral Roberts University, so allow me to explain stock dividends in its most basic form.

Dividends are usually declared at a company’s annual stockholder’s meeting by its board of directors, in this case White House senior staff.  In simple terms, dividend payouts are determined by the percentage of stock you own in the company, from the largest to the smallest.

In this example, the shareholders are the American people, more specifically voters who voted for Biden for president.

Blacks are, by far, the largest shareholder in Biden Inc., i.e., the Democrat Party.blackvoters-JOEBIDEN2021

Biden declared a dividend specifically to the Black community during his victory speech last November after he won the presidential election.  Biden said, “The African American community stood up again for me.  They always have my back, and I’ll have yours.”

If Biden were accused in a court of law of having Black folks back, would there be enough evidence to convict him?

Let’s start with Biden’s meeting with media appointed Black civil rights leaders last December.  He was extremely condescending and dismissive of them; and they allowed it to happen without so much as a whimper out of them!

Some of Biden’s first actions as president were to sign several executive orders encouraging open borders to anyone who wants to come to America; offer amnesty to everyone in the country illegally; give work permits to all illegals; bring homosexuals and transgenders under the 1964 Civil Rights Act.

With these numbers, Biden Inc.’s largest shareholders would be Blacks, whites, Latinos, Asians, homosexuals, and transexuals.

This should be the pecking order of the dividend distribution, emphasis on “should be.”

Based on the above, Blacks should be the largest recipient of Biden’s largesse.  But in typical Democrat fashion, Blacks don’t even get crumbs from Biden’s table.

Thus far, the biggest beneficiaries of Biden’s presidency are illegals, homosexuals, and transexuals.  Biden signed various executive orders for these groups within hours of him becoming president.

When will Black people take Biden to “political court” and demand payment of their dividend that they are rightfully entitled to?

How in the hell do Black Democrats allow illegals, homosexuals, and transexuals be placed ahead of them?

Blacks have the largest voting block in congress.   If they were to ever vote as a block, they could stop any piece of legislation that comes before them.

How can you support amnesty for illegals when low and under skilled Blacks are going to be hurt the most by this?  How can you allow homosexuals and transexuals to be brought under the Civil Rights Act of 1964?

If Biden were a corporation, Blacks could take him to court and would prevail.

Unfortunately, these chosen Black leaders are all too happy to get an invite to the White House for a photo-op.  Other groups go there to witness the signing of legislation of specific interest to their group, not for a photo-op.

Biden claims, without evidence, that he has Black people’s back.  But where is the dividend?  Where is the legislation?  Where are the senior level appointments to his administration?

How can you be angry with white liberals constantly screwing over Blacks when we allow it to keep happening?

How can you get angry with white liberals for sentencing our kids to remain in non-performing public schools while illegals get private teachers?

I challenge my readers to name me one thing of substance that Biden has done specifically for Blacks.  Something that will make a positive difference in the lives of Pookie and LaQuisha.

When all is said and done, there is more said than done!