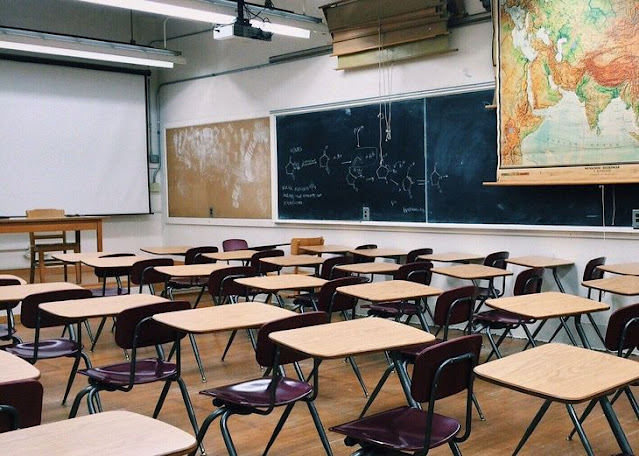 (Image by Wokandapix from Pixabay)

There was a time when parental involvement in our kids’ education was seen as a good thing that all parents should do. We were invited to meet our kids’ teachers and even participated in class once or twice a week. This was all part of making sure our kids obtained the education our tax dollars paid for.

The COVID pandemic and the moral panic following George Floyd’s death destroyed all of that. Unionized teachers advocated for closing schools and keeping them closed and started sneaking in critical race theory teachings at every level during online classes. When parents noticed and asked, they tended to get a run-around or worse. In Loudon County, Virginia, public school administrators and teachers formed a cabal to hunt down and smear parents who questioned them.

Rhode Island mom Nicole Solas wanted to know what her daughter was being taught in kindergarten. So she asked the school for copies of the curriculum. She is entitled to that, as a parent and as a taxpayer. Public school curricula are public documents.

Instead of accommodating her, the school fought her. That naturally raised her suspicions, so she asked for more and more, about 200 public information requests, and got more and more of a runaround from the school. The school even tried to stick her with a bill for $74,000 as a way of making her go away.

Now the all-powerful National Education Association-Rhode Island has sued Solas. She was served with the lawsuit this week. The NEA is the largest teachers’ union in the United States, and it backs using public schools to teach critical race theory. It proudly states that its president, Becky Pringle, is a “fierce social justice warrior and defender of educator rights.” NEA’s bio of Pringle doesn’t mention parents at all.

I just got served with a lawsuit from the teacher union NEARI. Throwing down the gauntlet, are we? Game on. 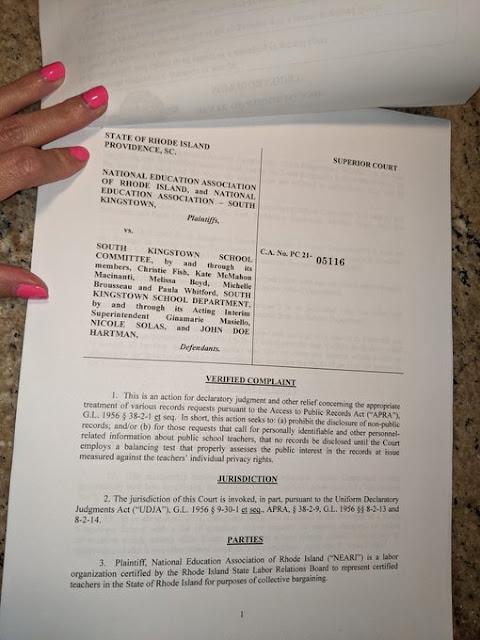 The NEA’s complaint is available here. The Goldwater Institute is representing Solas.

Boiled down, the gigantic union is begging the court to silence the mom, Nicole Solas, from asking questions about her child’s education. They want the court to enable public school administrators to hide documents that may be subject to FOIA laws (called APRA in Rhode Island, for the Access to Public Records Act). For instance:

I’ve dealt with public records from both sides, as a vigilante journalist and as a state agency employee, though not under Rhode Island’s APRA. Why is someone writing a “private” email or document to a public body? Why would a member of the NEA, in particular, do this? Its members are almost all public employees, making their electronic communications largely public information when a public body such as a school is also involved. Those communications may not be private at all. It can depend on the content and purpose of the communication or document. Typically a state’s attorney general is asked to weigh in on questions regarding documents such as these. NEA-RI seems to have chosen to use an intimidating lawsuit instead. Rhode Island’s attorney general is a Democrat, Peter Neronha. Depending on how APRA works, appealing to him rather than filing a lawsuit may have been the NEA’s smarter play.

My initial take is that this smells collusive. South Kingstown doesn’t want to produce records and the union is helping them out. The lawsuit purports to prevent disclosure of “private” information, but the public records laws and Solas’ requests pursuant to those laws only require the district to produce public records. The district has been very aggressive in asserting exemptions and redacting documents, so the union’s concern and rush to court seems peculiar, at best.

It’s worth noting that the South Kingstown NEA previously targeted Solas, as we reported, by holding a special membership meeting singling her out as a danger.

Solas has been on the union’s radar very much as a target. She seems to have caught public employees violating the state’s open meetings law.

Now the monstrous teachers’ union is suing her.