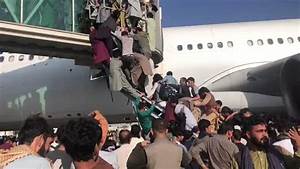 The notion that the Afghan conflict looked the same in 2021 as it did in 2016 is downright hallucinatory.

On Sunday morning, Taliban fighters captured Afghanistan's Bagram Airfield — the symbol and source of U.S. power projection in the region for 20 years — releasing thousands of prisoners. Within hours, Taliban fighters were trickling into the city center with little resistance. The Taliban had already swept in and captured the capital city of Kabul. By nightfall, President Ashraf Ghani had fled the country, and the Taliban's reconquest of Afghanistan was complete.

Last Monday in Doha, Qatar — the site of fruitless peace talks with the Taliban across now two administrations — the U.S. envoy to those talks announced his intention to "press the Taliban" for an end to their offensive across Afghanistan. It was a naive statement even at the time, and it hasn't improved in the week since.

The Taliban had already been pressing at the gates of several provincial Afghan capitals. Having withdrawn troops from the country, the U.S. lacked whatever leverage it once had in negotiations with the insurgent group. But the White House appeared confident. "Ultimately, our view is that the Afghan security forces have the equipment, numbers and training to fight back that will strengthen their position at the negotiating table," White House press secretary Jen Psaki insisted Tuesday.

What negotiating table? The idea that the Taliban were ever interested in peace talks was dubious before. By the middle of last week, it was downright fanciful. And in the hours that passed after Psaki made this ponderous pronouncement, the Taliban took one city after another. Like dominoes, Herat, Ghazni, Kunduz, Lashkar Gah and Kandahar fell to insurgents. In the process, Taliban fighters took control of millions of dollars' worth of vehicles, helicopters, offensive weaponry and advanced military infrastructure.

"The Taliban," Psaki observed last week, "has to make an assessment about what they want their role to be in the international community." This was hardly an errant thought. On Aug. 8, the U.S. Embassy in the Afghan capital had admonished the Taliban for sacrificing the "international legitimacy" they claim to want. "They should devote their energy to the #PeaceProcess," read a statement from the Kabul embassy's Twitter account, "not a military campaign. #CeasefireNow." For now, the "promise of hashtag" remains unrealized.

The White House's irresolvable confusion notwithstanding, the Taliban had made it perfectly clear what their intentions were.

As the insurgency retook Afghan territory, it resumed its abhorrent treatment of women and girls. Taliban members are reported to have targeted women with death for operating in professions or wearing clothing that offends the former leaders of the Islamic emirate. It has begun shuttering girls' schools with the intention of keeping them closed for good and relegating their students back to the shadows of Afghan society.

And according to Human Rights Watch, the Taliban have been summarily executing Afghan civilians linked to the government — a development Secretary of State Antony Blinken meekly said was "troubling." Already, the Afghans who put their lives on the line to assist the U.S. Army over the last decades are reported to have been beheaded, a grotesque dereliction of our duty to the Afghans who foolishly believed in the U.S.

These were the very same people we spent months talking "peace" with, demoralizing our Afghan allies in the process, only to abandon the charade and the country with it when it became clear that the Taliban weren't going to let us take the easy way out.

As recently as July, President Joe Biden insisted that it was "not inevitable" that the Taliban would retake control of the country. "The likelihood that there's going to be a Taliban overrunning everything and owning the whole country is highly unlikely," Biden reassured the public. By the middle of last week, intelligence officials who had thought it would take the Taliban a year to complete their reconquest of the country revised their estimates. Kabul would be cut off in the next 30 days, they warned. The city and the U.S.-backed government would fall to the Taliban before the year's end.

But even that was deliriously optimistic. Collapse came not in weeks but over the course of a single weekend. Kabul was all but surrounded not in 30 days but in 72 hours after these revised estimates were made public.

The U.S., which had hoped to preserve its diplomatic presence in its embassy — it even sent 3,000 troops to ensure that prospect — summarily abandoned the place and evacuated all but a skeleton crew. There may not have even been enough time to carry out orders to burn sensitive documents, agency logos and even U.S. flags — lest the American public have to confront the wages of our defeat on their television screens.

The Biden White House's belief in a Taliban that existed only in their own minds was so total that one of the administration's last, desperate gambits was to beg the insurgency for mercy. The New York Times reported as recently as Thursday that the U.S. envoy in Doha had a new objective: to seek assurances from the Taliban that they would leave America's embassy in peace. The administration was even reported to have dangled "financial aid and other assistance" to the "future Afghan government," a euphemism for a Taliban-run enterprise.

Given the Taliban's commitment to violence and its refusal to renounce its ties to Islamist terrorist groups, such assurances — even if they were forthcoming — wouldn't be worth a dime. Such a deal would only have legitimized an entity the Biden administration insists is illegitimate by virtue of the tactics it is using to seize power. And in the end, it would only have preserved a diplomatic presence in a capital city operated by a government Washington doesn't recognize. What were they thinking?

With the near total collapse of the Afghan armed forces, the Biden administration was left to articulate its last, most demoralizing argument in favor of total withdrawal — we are powerless to alter the course of events and should accept our utter futility.

Over the weekend, the president released a written statement outlining the rationale that led to our unilateral declaration of defeat. "One more year, or five more years, of U.S. military presence would not have made a difference if the Afghan military cannot or will not hold its own country," Biden insisted. The president's dubious exercise in clairvoyance notwithstanding, a review of even the recent past doesn't support this kind of fatalism.

The notion that the Afghan conflict looked the same in 2021 as it did in 2016 is downright hallucinatory. The U.S. and NATO formally ended combat operations in Afghanistan at the end of 2014. In the years that followed, the American mission had been limited to support operations for local forces, many of which took place from behind the high walls of U.S.-run facilities. To the extent that America's modest, affordable and low-risk footprint in Afghanistan maintained the peace, it was largely as a deterrent force that dissuaded the Taliban from embarking on the broad offensive now underway.

The last American combat-related death in Afghanistan occurred on Feb. 8, 2020. Every U.S. soldier's death in service to the country is tragic, and their sacrifices must be honored. But to call that an unacceptable level of risk calls into question U.S. deployments to places like Kosovo, the United Arab Emirates, Egypt, Jordan, Bahrain and Kuwait, where U.S. soldiers also lost their lives last year.

And yet, the happy fallacy Biden may come to regret putting his faith in most is the notion that the U.S. was desperate to dissolve our commitments to the Afghan people and would celebrate that achievement. Where are the sighs of relief from a grateful public? Where are the celebrations? If Brookings Institution scholars Madiha Afzal and Israa Saber are right, the Biden administration has misread the national mood.

"The public seems to be partly ambivalent, partly divided on the correct course of action," they wrote in a careful dissection of recent polling on the American presence in Afghanistan. "What's clear is that the common refrain in policy debates that 'Americans want out' is not accurate and should not be presented as the driving force for efforts to withdraw from Afghanistan."

That idea — the notion that the American public longed for this humiliation — may prove to be just another delusion. And a terribly costly one, at that.