BY CHRIS ENLOE | The Blaze 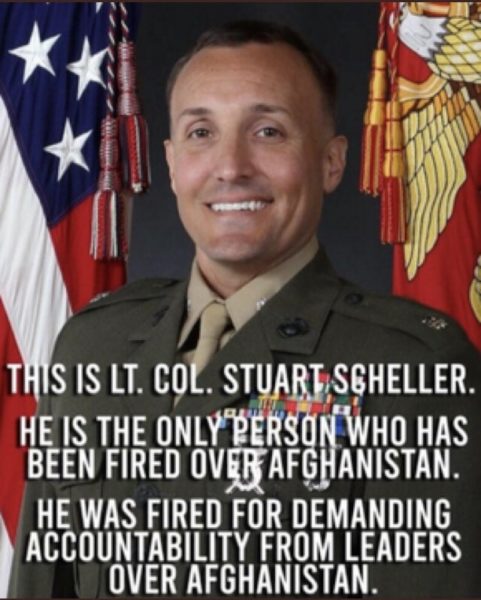 The Marine officer who was fired after speaking out against top military leadership for the disastrous Afghanistan withdrawal has issued a new warning to those same leaders.

What is the background?

In the video, Scheller explained that he had questions for his "senior leaders," and inquired whether those leaders bucked details of the White House's Afghanistan withdrawal plan, such as the decision to surrender Bagram Air Base.

"Did anyone do that? And when you didn't think to do that, did anyone raise their hand and say, 'We completely messed this up?'" he said.

"The reason people are so upset on social media right now is not because the Marine on the battlefield let someone down," Scheller said. "That service member always rose to the occasion and has done extraordinary things. People are upset because their senior leaders let them down and none of them are raising their hands and accepting accountability or saying 'we messed this up."

On Friday, Scheller revealed on Facebook that he had been "relieved for cause based on a lack of trust and confidence."

What is Scheller saying now?

The decorated Marine spoke to the New York Post and issued a warning about accountability coming for top military leaders.

"The baby boomer's turn is over," Scheller said. "I demand accountability, at all levels. If we don't get it, I'm bringing it."

According to the Post, Scheller also quoted Thomas Jefferson, saying, "every generation needs a revolution."

The New York Post also spoke to Scheller's father, Stuart Scheller Sr., who described his son as "the real deal, a Marine's Marine."

"People will follow him to the ends of the earth. He has put his life on the line for fellow Marines so putting his career on the line like this does not surprise us," Scheller Sr. said. "It's interesting that no one [in the military] has answered his call for accountability. Their answer was to fire him I guess. It's a sad day for America."