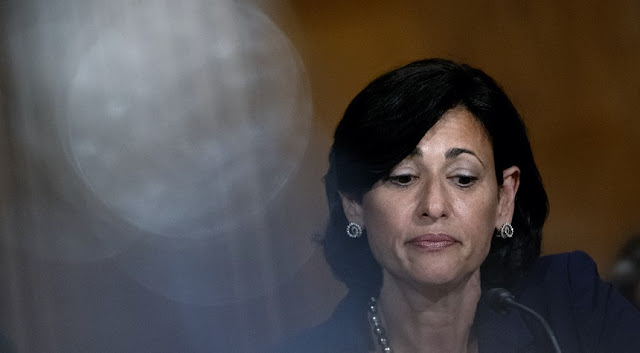 When it comes to the swamp that has become D.C., nothing should surprise anyone anymore, especially when it comes to officials within the government using resources to personally enrich themselves or failing to disclose when their families stand to benefit from their governmental “service.”  While the Left was consistently worried about Trump and his family using the Presidency to enrich themselves, they seem much less concerned about Hunter Biden’s travels on the American taxpayer dime to peddle his father’s influence – or by his current career/money-laundering scheme as an “artist.”

New information provided exclusively to RedState by syndicated radio talk show host Howie Carr shows that Centers for Disease Control (CDC) Director Dr. Rochelle Walensky is finding multiple ways to benefit from her new position. Walensky, who took over as director with Biden’s inauguration, is married to Loren D. Walensky, a renowned pediatric oncology researcher at the Dana-Farber Cancer Institute at Harvard. In October 2019 Loren Walensky became the scientific co-founder and a member of the Board of Directors of Lytica Therapeutics, “an early-stage biotechnology company working on an innovative platform for developing next-generation antimicrobials.” (LabCentral)

Just four months later, Walensky’s Lytica received a $16.9 million dollar HHS grant to “develop antibacterial peptides with broad activity against multidrug-resistant bacteria.”  Only $5.3 million of that money was initially disbursed to Lytica, and the remaining $11.6 million is scheduled to be disbursed upon the achievement of “certain development milestones.” I have previously worked in the world of grant writing and can tell you most agencies will not give grants to organizations that have existed for less than a year and organizations that have no other stream of funding. In this particular case Crunchbase, which monitors funding for corporations and non-profits, shows that the only funding that Lytica has received to date is the $5.3 million allocated from the grant received.

Again, the only funding this new company has received to date – nearly two years after its founding – is the $5.3 million allocated from the HHS grant.

The grant was funded and organized by the Assistant Secretary for Preparedness and Response (ASPR) with the U.S. Department of Health and Human Services, which oversees and administers the Biomedical Advanced and Development Authority (BARDA) program, which is similar to the PREDICT program at the center of Wuhan Institute of Virology gain-of-function research controversy. The Lytica Therapeutics grant was provided through BARDA’s CARB-X program. According to the website:

Projects funded by CARB-X, the group states, “are in the early stages of research, and there is always a high risk of failure,” but, if they’re successful, and a for-profit company like Lytica Therapeutics is behind it, the company (and its shareholders) can profit off of the drug’s commercialization.

Interestingly, BARDA also has teamed up with the Wellcome Group, headed by Jeremy Farrar, who many of you may remember was a signer of the Peter Daszak organized Lancet letter, which sought to debunk the now-legitimized Wuhan Lab-Leak Theory of the SARS-CoV-2 virus.

While Walensky received the grant prior to his wife becoming director of an HHS-governed organization, his wife was directly associated with HHS for more than a decade when his company was awarded the grant. Rochelle Walensky served as the chair of the Office of AIDS Research Advisory Council, which put her in close contact with Dr. Antnony Fauci, and as a member of the US Department of Health and Human Services Panel on Antiretroviral Guidelines for Adults and Adolescents (again, with Dr. Fauci). In fact, when “insiders” were surprised that Walensky was picked, it was revealed that Fauci had a lot to do with her appointment:

Biden’s transition team conducted a wide search for a new CDC director, and Walensky’s name was mentioned by several people, according to an official familiar with the process. For some, she was a surprise choice. Yet among those recommending her was Anthony Fauci, director of the National Institute of Allergy and Infectious Diseases, who is serving as a medical adviser to Biden.

“One of the key people we talked to was Dr. Fauci, and Dr. Fauci really believed that Dr. Walensky was the right person to lead the CDC, so that was obviously an important recommendation,” [Biden transition co-chair Jeff] Zients said. “In Dr. Walensky, we were able to find someone with the experience and the background to lead the CDC and that turnaround.”

Two top NIAID officials, one of whom worked closely with Director Walensky in the HIV/AIDS research arena, serve on CARB-X’s Joint Oversight Committee, which selects which applicants will receive grants through a competitive process.

The fact that Walensky’s grant was not disclosed as a portion of his wife’s appointment amounts to a massive lack of transparency. In her financial disclosures, submitted January 13, 2021, she lists her husband’s interest in Lytica Therapeutics as a “spousal holding,” but doesn’t indicate that he is the co-founder of the company and ostensibly working there since he is the inventor of the technology subject to the CARB-X grant. She also doesn’t indicate in that filing that his company is receiving a federal grant from the very agency in which she’s being appointed to a leadership position – and the agency that still has to make decisions on whether to award the additional $11.6 million.

Director Walensky had a responsibility to report this conflict of interest upon taking office, however, no records exist of her doing so. One can only reach the conclusion that her failure to disclose was because she suspected that doing so could have disqualified her from consideration for the position.  Even more alarming is that the Biden Administration either didn’t do their homework in nominating Director Walensky or simply didn’t care. This information wasn’t hard to come by either, which is a scathing indictment of the mainstream media who did not question Director Walensky’s qualifications or background in her appointment to her position. We all know that if this same situation existed for a Trump Administration official, the media would have had a collective meltdown.