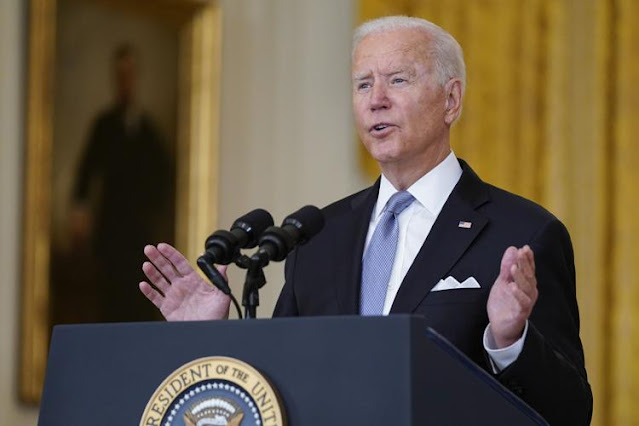 President Joe Biden speaks about Afghanistan from the East Room of the White House on Monday, Aug. 16, 2021, in Washington. - Evan Vucci / AP

Since World War II, the U.S.-based international order of global alliances that promoted peace for America and her allies has been unraveling. During President Jimmy Carter's reign, we witnessed the rise of global terrorism when he failed to support the 1979 Shah-led Iran revolution. This legitimatized militant Islamists in the Middle East, which led to the global terrorist attacks and the horrific events of 9/11 in America.

Barack Obama's foreign-policy missteps further eroded U.S. security. He failed to protect American interests in Afghanistan. His misread of the Arab spring increased instability in the region. He failed to improve relations between Israel and Palestine. Four Americans were killed in Benghazi without retaliation. During Obama's reign, America's influence on the international stage became oblivious.

When Biden announced his "Dream Team" of foreign policy experts, reporters were “swooning” over this group of Obama retreads as if they had just won WWIII. Yet these reporters and pundits were idolizing the same group that just a mere decade ago presided over absolute chaos abroad.

Everyone on Biden's "team" is an Obama retread. That should raise a white flag! Obama's foreign policy was to be nice to our enemies and turn our backs on our allies. Most past presidents chose respected advisers like Colin Powell, Henry Kissinger, John Foster Dulles and Mike Pompeo, who improved America's influence on the world stage. Biden's motley crew has a record of surrendering long before the fight even starts.

"There is no pure competitor to the United States."

Biden's Secretary of State Antony Blinken has been a career Biden aide. He was deputy security adviser and deputy secretary of state under Obama. He supported Obama's catastrophic decision to bomb Libya that unleashed a violent civil war. He helped start a war that will go on for eternity.

Jake Sullivan, a 44-year-old former aide to Secretary of State Hillary Clinton, is Biden’s choice for national security adviser. Sullivan was Clinton's deputy chief of staff during the 2012 attacks on the U.S. in Benghazi. He was unconcerned that Clinton used private email for official state business.

By resuscitating establishment left wing Obama-crats for his foreign policy team, Biden is trying to sell Americans a bill of goods. He wants us to believe U.S. foreign policy was great before Donald Trump destroyed America’s image and influential position as the dominant leader of the free world.

"My goal is to restore the former world order that we had when Barack was president."

Under Donald Trump, America’s power was unrivaled. He notched key foreign-policy successes in the Middle East and was the first U.S. president that challenged a Red Chinese dictator and won hands down. He raised global awareness of China's technology that threatens cyber security and brought Beijing to its knees with a new trade deal. He stopped China's land-grab in the China Sea, and moved the U.S. embassy from Tel Aviv to Jerusalem without even a whimper from Palestine.

In post 9/11 America, all roads lead to Afghanistan and the Taliban. Next to Japan's bombing of Pearl Harbor on Dec. 7, 1941, the 2001 bombing of the World Trade Center in New York by al-Qaeda led by Osama bin Laden and Afghan terrorists is embedded in the memories of all Americans forever.

Within days, George Bush formed a coalition including Canada, Australia, Germany, France and the UK to bomb Afghanistan and destroy the Taliban. Operation Enduring Freedom killed Abdul Rashid Dostum, their military leader, and the Taliban regime rapidly came undone. Over the next few weeks, the Taliban retreated and the UN sent peacekeepers to Afghanistan to promote stability.

Establishing law and order in Afghanistan has been a two-decade battle. Like other terrorists, the Taliban quickly regrouped and resumed raising "hell"! Obama escalated the war when we had a chance to make peace. Attempts by Trump's advisers to negotiate a truce lacked public support.

"We will not let radical Islam ideology continue to oppress the people of the world."

With the help of America in 2020, the Taliban and the Afghan government met in Doha, Qatar after nearly 20 years of war. Both sides wanted peace and a cease-fire was called. It was agreed the U.S. would start removing troops, but only as long as peace was maintained.

While Joe Biden gloats over deserting Afghanistan, the Taliban is humiliating America. His retreat from Afghanistan is worse than Obama ignoring the Arab Spring. The Taliban marched into Kabul, murdered hundreds of civilians, and declared radical Islamic law. The U.S. embassy has told all Americans to find a way out. Refugees are fleeing to the airport, begging to escape persecution. Due to Biden's incompetence, we couldn't even protect our own citizens or our embassy in Kabul.

Ronald Reagan said, "We cannot have peace by avoiding conflict." Biden's team of foreign policy makers flunked their first test. Biden hoped fellow progressives would jump for joy with a headline "Biden Ends The Afghan War!'' Yet by allowing the Taliban to violate the treaty they signed in 2020 to end the Afghan civil war, Americans will someday soon see a different headline: "Taliban Terrorists Strike Again."

"Where ignorance is our master, there is no possibility of real peace."

There's a big difference between enforcing your will as the world's policeman and being a global peacekeeper. Thousands of American troops have been stationed in South Korea for years even though the Korean War ended some 70 years ago. The mindset of a successful U.S. president has always been that a defensive peace is far better than an offensive war in an unpredictable region.

The Biden team refuses to talk with Pyongyang unless they abandon all nuclear weapons? Both he and VP Harris have spoken against India's Hindu government. China has already started to renew the trade war with the U.S. And the Middle East is elated with America's new energy dependence. Biden called Russia the biggest enemy of the U.S. and scolded the UK for leaving the EU. Biden's domestic policy might annihilate our economy but his inept foreign policies might kill us someday.

"I consider myself to be as informed on American foreign policy as anyone in America."