May condemns London attacks that killed 7; police arrest 12 in raids 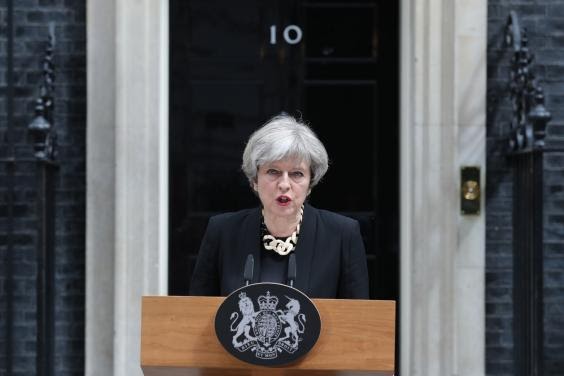 May addressed the attack Sunday after a meeting of the government’s COBRA emergency committee. In her speech, May called for a tougher stance at home against extremists and tougher controls on cyberspace to prevent its use by extremists.


She added that the measures were needed as “terrorism breeds terrorism” and attackers copy each other.
Her remarks came as police carried out raids in east London and arrested 12 people in connection with the attacks. 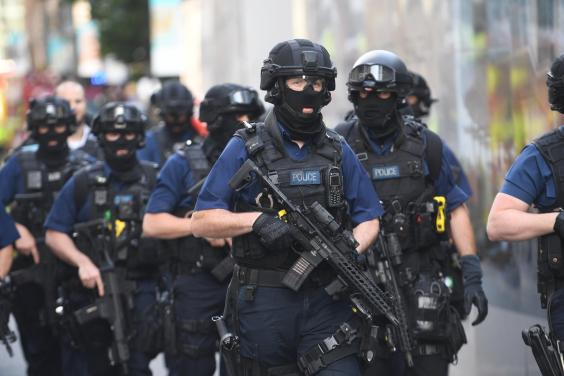 "Searches of a number of addresses in Barking are continuing," London Metro Police said at 1 p.m. Sunday local time.
One of the raided homes belonged to one of the three terrorists involved in the attacks, Sky News reported.
Saturday’s horror began around 10 p.m. local time when a white van veered off the road and barreled into pedestrians on London Bridge. Three men jumped out of the van with large knives and attacked people at bars and restaurants in nearby Borough Market, police and witnesses said.
“I saw a van going on the pedestrian walkway,” Brad Myers, an American vacationing in London who witnessed the London Bridge attack, said on “Fox & Friends” Sunday. Myers said he was taking pictures and was about to walk along the Thames River when he saw the commotion.
The assault was reminiscent of the truck attack in Nice, France, said Myers, who added: “I was always on alert that it could happen.”
“It’s crazy to think I was right there,” he said.
Police killed the three attackers within eight minutes. They were wearing fake bomb vests, police said.
May, who faces election Thursday, confirmed that 48 people were being treated in hospitals across London and many had life-threatening injuries. The city’s ambulance service said 80 medics responded to the scene.
British Transport Police added that one officer suffered serious injuries responding to the attack, but was expected to survive. The officer suffered wounds to the head, face and leg.
France Prime Minister Emmanuel Macron confirmed that some of the wounded included French nationals.
London Metropolitan Police force declared the attacks "terrorist incidents."
"We believe three people were involved, but we still have got some more inquiries to do to be 100 percent confident in that," Assistant Police Commissioner Mark Rowley said.
As dawn broke over the capital, a large area on the south bank of the River Thames remained cordoned off. Police told people to avoid the area, leaving tourists and revelers struggling to get home. Police were also conducted raids around the area.
Only hours before, bursts of gunfire echoed through the streets — likely from armed police — and at least three blasts rang out as officers performed controlled explosions. One image taken by a witness showed a man on the ground surrounded by police; he appeared to be wearing a vest with canisters attached to it.
Gerard Vowls told The Guardian newspaper that he saw a woman being stabbed by three men at the south end of London Bridge. He said he threw chairs, glasses and bottles at the attackers in a bid to stop them.
"They kept coming to try to stab me. They were stabbing everyone. Evil, evil people," he told the newspaper. "I want to know if this girl is still alive. I've been walking around for an hour and a half crying my eyes out. I don't know what to do."
Bartender Alex Martinez said he hid in a garbage bin for a half hour when a man stormed the restaurant where he worked, which was nearly full.
"I saw that man with a knife in his hand and after that a man started screaming so I knew something wrong was happening," he said.
Some witnesses told Sky News and BBC that attackers shouted “this is for Allah.” But police have not confirmed the account.
Police initially said officers were also responding to a third incident, in the Vauxhall neighborhood, but later said that turned out to be an unrelated stabbing.
President Donald Trump was briefed on the attacks.
May said the election would be held as scheduled. Major parties suspended national campaigning Sunday out of respect for the victims.
Speaking to Fox News from London, Secretary of Homeland Security John Kelly said the latest attacks mark the fourth or fifth time he's had to call his British counterpart in just four months on the job because of "terrible events like this."
It was the third terror attack to hit Britain in as many months.
In March, a British convert to Islam ran down people with a vehicle on Westminster Bridge, killing four, then stabbed a policeman to death outside Parliament.
On May 22, a British suicide bomber killed 22 people and injured dozens at an Ariana Grande concert in Manchester. After that attack, Britain's official threat level from terrorism was raised to "critical," meaning an attack may be imminent. Several days later it was lowered to "severe," meaning an attack is highly likely.
ISIS claimed responsibility for those two attacks.
The Associated Press contributed to this report.