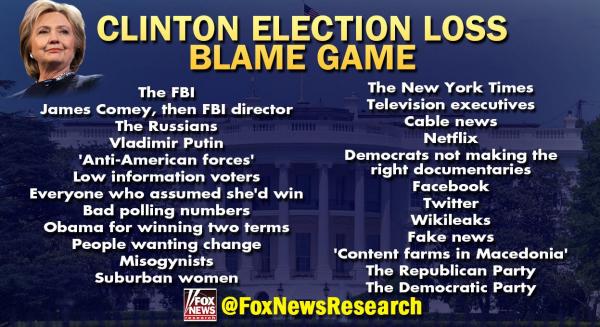 
Two-time failed presidential hopeful Hillary Clinton has blamed everything and everyone other than the old lady looking back at her in the mirror for her 2016 presidential election loss. The politically irrelevant former politician began whining and complaining about her stunning loss to Donald Trump soon after Election Day, and shows no signs of letting up.


To view the full text of this article, click here. 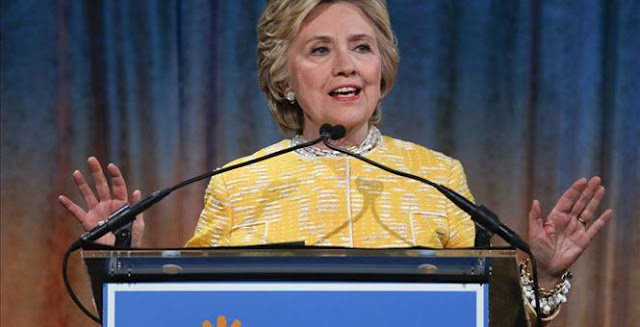 Irritated Democrats say Hillary Clinton is wrong to cast blame on the national party for her loss to Donald Trump.


Allies of the Democratic National Committee (DNC) in particular were incensed by Clinton’s criticism of the party apparatus, saying she mischaracterized the committee’s work while needlessly stoking internal divisions.
“This is all about the last campaign. And really, what Democrats should be focusing on, and what I think Hillary Clinton should be figuring out, is how do we empower the DNC to have the best data resources to win races this year, in 2018 and 2020,” a former DNC aide said.
“Having hard feelings about the data that you may or may not have received in 2016 ultimately is not the reason why we lost.”
…


Clinton has been making a series of public appearances in recent weeks, including Wednesday’s event and a commencement address last week at her alma mater, Wellesley College.
But some Democrats wonder how helpful it is for Clinton to keep grabbing the spotlight and relitigating the election as the party looks for new leadership.
“It’s always healthy whether you win or lose to do some introspection on what went right and what went wrong. That’s fine,” the former DNC aide said. “It may be cathartic. But it doesn’t help the party win races.”