Trump's Personal Attorney Slams Comey, Suggests He Should Be Prosecuted For Leaking Memos 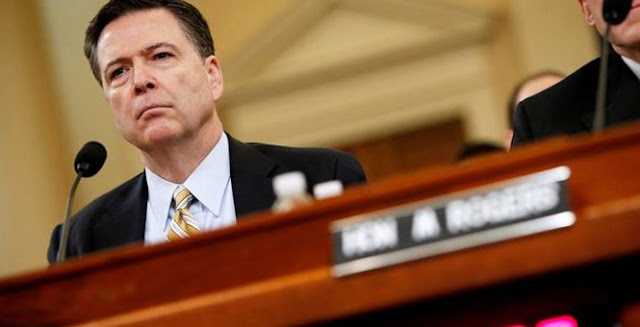 
"Contrary to numerous false press accounts leading up to today’s hearing, Mr. Comey has now finally confirmed publicly what he repeatedly told the President privately:  The President was not under investigation as part of any probe into Russian interference.  He also admitted that there is no evidence that a single vote changed as a result of any Russian interference," Kasowitz said.
During his testimony Comey admitted to leaking a memo he wrote after a meeting with President Trump to a friend, who then gave it to the New York Times. Comey justified the action by saying he thought it would trigger the appointment of special counsel.
"I didn't do it myself for a variety of reasons, but asked him to, because I thought that it might prompt the appointment of a Special Counsel. I asked a close friend of mine to do that," Comey said.
Kasowitz took notice, denied President Trump had demanded loyalty as Comey claimed in a written statement published before the hearing and implied Comey should be investigated along with others for improper disclosure of privileged information.
"The President also never told Mr. Comey, “I need loyalty, I expect loyalty” in form or substance. Of course, the Office of the President is entitled to expect loyalty from those who are serving in an administration, and, from before this President took office to this day, it is overwhelmingly clear that there have been and continue to be those in government who are actively attempting to undermine this administration with selective and illegal leaks of classified information and privileged communications. Mr. Comey has now admitted that he is one of these leakers," he said. "We will leave it the appropriate authorities to determine whether this leaks should be investigated along with all those others being investigated."


Former FBI Director Comey said today that stories leaked to the media about the Russia investigation are often wrong because the people leaking the information don’t really understand what is going on.
Under questioning from Sen. Tom Cotton, Comey even agreed one pivotal New York Times story on the topic was almost entirely wrong.
The specific article Comey disputed was this one, published by the NY Times on February 14th. Titled “Trump Campaign Aides Had Repeated Contacts With Russian Intelligence” the article suggested an opportunity for Trump campaign collusion with Russia, though it also said there was no proof of any collusion so far. Here’s how it opened:
“Phone records and intercepted calls show that members of Donald J. Trump’s 2016 presidential campaign and other Trump associates had repeated contacts with senior Russian intelligence officials in the year before the election, according to four current and former American officials. American law enforcement and intelligence agencies intercepted the communications around the same time they were discovering evidence that Russia was trying to disrupt the presidential election by hacking into the Democratic National Committee, three of the officials said.”
Today Sen. James Risch of Idaho asked Comey about that article specifically. “You talked with us shortly after February 14th, when the New York Times wrote an article that suggested that the Trump campaign was colluding with the Russians. You remember reading that article when it first came out?” Risch said. “I do. It was about allegedly extensive electronic surveillance communications,” Comey replied.
“And that upset you to the point where you actually went out and surveyed the intelligence community to see whether you were missing something in that. Is that correct?” Risch said. Comey replied, “That’s correct.”
“After that, you sought out both Republican and Democrat senators to tell them that, hey, I don’t know where this is coming from, but this is not the case, this is not factual. Do you recall that?” Risch said.
“Yes,” Comey replied.
“So, again, so the American people can understand this, that report by the New York Times was not true. Is that a fair statement?” Risch asked. Comey then offered a lengthy answer:
“In the main, it was not true. And, again, all of you know this, maybe the American people don’t. The challenge, and I’m not picking on reporters, about writing stories about classified information is that people talking about it often don’t really know what’s going on. And those of us who actually know what’s going on are not talking about it. And we don’t call the press to say, ‘hey, you got that thing wrong about this sensitive topic.’ We just have to leave it there.”
Later, Sen. Tom Cotton raised the issue of the NY Times story again. “Would it be fair to characterize that story as almost entirely wrong?” Cotton asked. Comey replied, “Yes.”
After the hearing, the NY Times tweeted that it was looking at Comey’s statements about the story and would “report back” when it could.
The Washington Post points out how significant this story was at the time and how adamant the Times was about it despite White House denials:
“White House Chief of Staff Reince Priebus told “Fox News Sunday,” “The New York Times put out an article with no direct sources that said that the Trump campaign had constant contacts with Russian spies, basically, you know, some treasonous type of accusations. We have now all kinds of people looking into this. I can assure you and I have been approved to say this — that the top levels of the intelligence community have assured me that that story is not only inaccurate, but it’s grossly overstated and it was wrong. And there’s nothing to it.”… Attacks from folks such as Priebus prompted New York Times Executive Editor Dean Baquet to issue this defense: “The Times had numerous sources confirming this story. Attacking it does not make it less true.”
Looking back, it sounds as if Reince Priebus was right, but I guess we’ll see what the NY Times has to say for itself after taking a 3rd look at this piece.
Click here to watch the video.