As many as three different incidents, one described as terror-related, were unfolding in London late Saturday, including a van crashing into a crowd at London Bridge and a series of stabbings reported at nearby Borough Market. 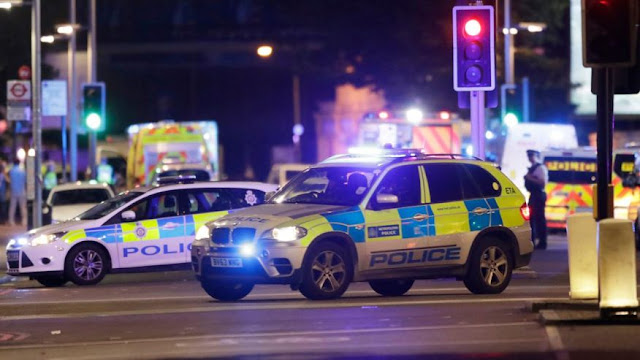 Police also urged people to stay away from the Vauxhall area -- more than a mile away -- as they looked into another "incident," without elaborating. Gunfire erupted at the bridge, though witnesses said it could have come from police.
Sources told Sky News the London Bridge crash was being investigated as a "terrorist incident." It came just over two months after a deadly car-and-knife attack at British Parliament, and less than two weeks after the suicide bombing at the Ariana Grande concert in Manchester that killed 22 people. Britain just recently lowered its official terror threat from "critical."
Witness Holly Jones told the BBC a white van careened off the road and struck as many as six people on London Bridge. She said she saw at least four or five people on the ground.
Another witness, Will Heaven, said he saw people who appeared to have been hit, and one being put into an ambulance. "We saw injured people on the road, injured people on the pavement," he told Sky News, saying the crash did not appear to be accidental.
_______________


A Borough Market witness identified only as Ben told the BBC: "We saw people running away and then I saw a man in red with a large blade, at a guess 10 inches long, stabbing a man, about three times. He continued, "It looked like the man had been trying to intervene, but there wasn't much he could do. He was being stabbed quite coldly and he slumped to the ground."
Video from the area showed police with guns bursting into nearby bars and ordering people to get down on the floor. Frightened onlookers around the bridge walked away with their hands on their heads.
____________


Please remain calm, but be alert & vigilant. We are using all necessary skills & resources at #LondonBridge #BoroughMarket #Vauxhall
_______________


Prime Minister Theresa May and President Trump were briefed with updates. The prime minister is set to lead a meeting of the government emergency response committee Sunday, British officials added.
"We stand ready to provide all possible consular assistance should we become aware of any affected U.S. citizens," a State Department official told Fox News. "We strongly encourage U.S. citizens in the United Kingdom to directly contact concerned family members in the United States to advise them of  your safety‎."
"We're monitoring the situation in London and we're in touch with British authorities," New York Police Department spokesman J. Peter Donald told Fox News.
Transportation officials said the busy London Bridge station has been closed at the request of police; two additional stations also were closed.
An eyewitness told Sky News he saw people who seemed to have been run over and people being placed in an ambulance covered in blankets.


This is a developing story. The Associated Press contributed to this report.