His prepared testimony shows why he deserved to be fired. 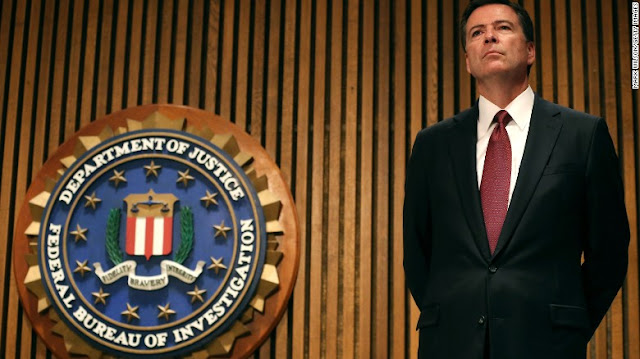 The Senate Intelligence Committee released James Comey’s prepared testimony a day early on Wednesday, and it looks like a test of whether Washington can apprehend reality except as another Watergate. Perhaps the defrocked FBI director has a bombshell still to drop. But far from documenting an abuse of power by President Trump, his prepared statement reveals Mr. Comey’s misunderstanding of law enforcement in a democracy.
Mr. Comey’s seven-page narrative recounts his nine encounters with the President-elect and then President, including an appearance at Trump Tower, a one-on-one White House dinner and phone calls. He describes how he briefed Mr. Trump on the Russia counterintelligence investigation and what he calls multiple attempts to “create some sort of patronage relationship.”
But at worst Mr. Comey’s account of Mr. Trump reveals a willful and naive narcissist who believes he can charm or subtly intimidate the FBI director but has no idea how Washington works. This is not new information.
When you’re dining alone in the Green Room with an operator like Mr. Comey—calculating, self-protective, one of the more skilled political knife-fighters of modern times—there are better approaches than asserting “I need loyalty, I expect loyalty.” Of course the righteous director was going to “memorialize” (his word) these conversations as political insurance.
Mr. Trump’s ham-handed demand for loyalty doesn’t seem to extend beyond the events of 2016, however. In Mr. Comey’s telling, the President is preoccupied with getting credit for the election results and resentful that the political class is delegitimizing his victory with “the cloud” of Russian interference when he believes he did nothing wrong.
Mr. Comey also confirms that on at least three occasions he told Mr. Trump that he was not a personal target of the Russia probe. But Mr. Comey wouldn’t make a public statement to the same effect, “most importantly because it would create a duty to correct” if Mr. Trump were implicated. This is odd because the real obligation is to keep quiet until an investigation is complete.
More interesting is that Mr. Trump’s frustration at Mr. Comey’s refusal raises the possibility that the source of Mr. Trump’s self-destructive behavior isn’t a coverup or a bid to obstruct the investigation. The source could simply be Mr. Trump’s wounded pride.
The most troubling part of Mr. Comey’s statement is his belief in what he calls “the FBI’s traditionally independent status in the executive branch,” which he invokes more than once. Independent? This is a false and dangerous view of law enforcement in the American system.
Mr. Comey is describing an FBI director who essentially answers to no one. But the police powers of the government are awesome and often abused, and the only way to prevent or correct abuses is to report to elected officials who are accountable to voters. A director must resist intervention to obstruct an investigation, but he and the agency must be politically accountable or risk becoming the FBI of J. Edgar Hoover.
Mr. Comey says Mr. Trump strongly suggested in February that he close the Michael Flynn file, but after conferring with his “FBI senior leadership” he decided not to relay the conversation to Attorney General Jeff Sessions or any other Justice Department superior. If he thought he was being unduly pressured he had a legal obligation to report, and in our view to resign, but he says he didn’t because “we expected” that Mr. Sessions would recuse himself from Russia involvement.
Well, how did he know? Mr. Sessions didn’t recuse himself until two weeks later. Mr. Comey also didn’t tell the acting Deputy AG, who at the time was a U.S. attorney whom Mr. Comey dismisses as someone “who would also not be long in the role.”
This remarkable presumptuousness is the Comey mindset that was on display last year. He broke Justice Department protocol to absolve Hillary Clinton’s mishandling of classified material, without the involvement of Justice prosecutors or even telling then Attorney General Loretta Lynch. Mr. Comey’s disregard for the chain of legal command is why Mr. Trump was right to fire him, whatever his reasons.
Also on Wednesday two leaders of the intelligence community told the Senate Wednesday that they had not been pressured to cover up anything. “I have never been pressured—I have never felt pressured—to intervene or interfere in any way with shaping intelligence in a political way or in relation to an ongoing investigation,” said Director of National Intelligence Dan Coats. National Security Agency Director Mike Rogers added that he never been asked “to do anything I believe to be illegal, immoral, unethical or inappropriate.”
Meanwhile, Mr. Trump announced that he is nominating respected Justice Department veteran Christopher Wray as the next FBI director. Let’s hope Mr. Wray has a better understanding of the FBI’s role under the Constitution than Mr. Comey does.
https://www.wsj.com/articles/the-independent-mr-comey-1496878266
Posted by Frances Rice at 10:24 PM