Heritage Foundation Applauds Trump For Accomplishing 64% of the Trump Agenda 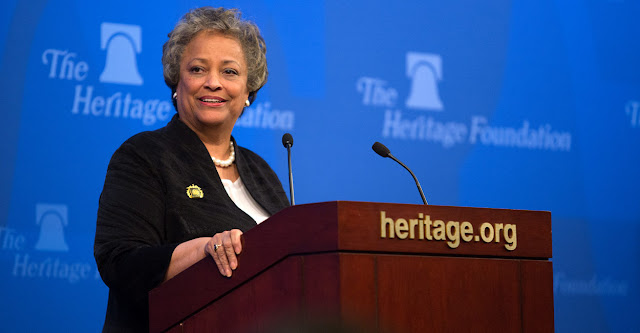 President Donald Trump quoted Heritage expert Tommy Binion who was on Fox and Friends discussing how over two-thirds of Heritage's policy recommendations had already been adopted by President Trump's Administration. 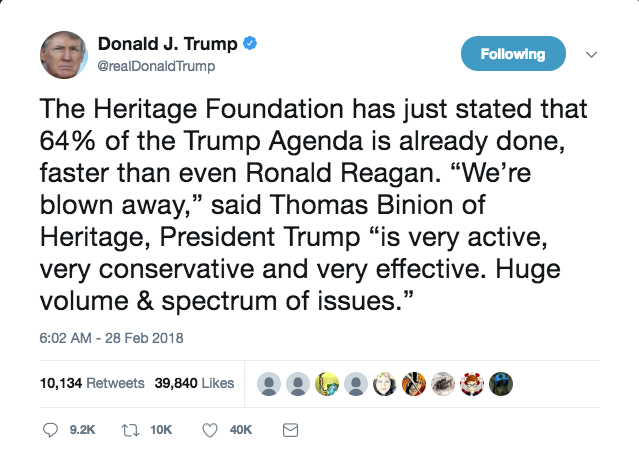 The Trump Administration's embrace of these conservative policy recommendations is a huge step forward.

The Washington Examiner, in a piece, goes on to say:

"With unprecedented speed, the Trump administration has already implemented nearly two-thirds of the 334 agenda items called for by the Heritage Foundation, a pace faster than former President Reagan who embraced the conservative think tank’s legendary “Mandate for Leadership” blueprint."

Read more about the policy recommendations that President Trump implemented

And Rush Limbaugh also stated in his show:

"A lot of people are seeing expansions in their benefit packages. We are reaching statistical full employment. The Heritage Foundation today has issued a report saying that 65% of Donald Trump’s agenda has already been accomplished in just one year. There isn’t a president in modern times who got even close to that. The Heritage Foundation reporting that 65% of Trump’s agenda has already passed. Trump is not slowing down."
________________ 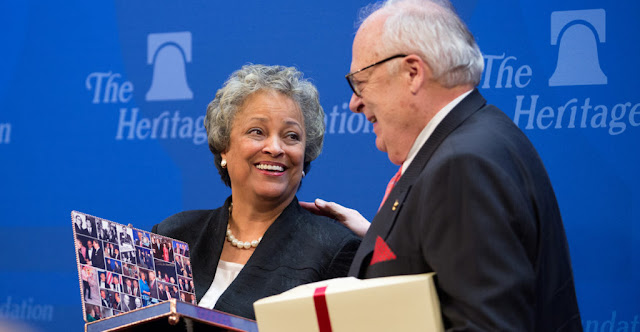 "We will open the hearts and minds and doors of the millions of Americans who really are conservative, but just don’t know it yet," Heritage Foundation President Kay Coles James says in a speech at the leading think tank's Capitol Hill headquarters. (Photo: Willis Bretz for The Heritage Foundation)

Conservatives must persevere in gracefully countering misinformation from the left that convinces too many Americans liberal policies will improve their lives, the new president of The Heritage Foundation said in a speech laying out her vision for the leading think tank.

“Unfortunately, many Americans are misinformed,” Kay Coles James said. “Like us, they want liberty, equality, opportunity, but unlike us, they mistakenly believe that those ideals can be achieved by the failed policies of the left.”

Heritage billed the speech, entitled “Imagine America: A Pathway Forward for All Americans,” as an outline of James’ vision not just for the leading conservative think tank but for the nation as a whole.

James, who spoke for 16 minutes, said Heritage will reach out purposefully to Americans of all backgrounds “who really are conservative, but just don’t know it yet.”

Americans need an alternative to the mainstream media. But this can't be done alone.

She spoke during an invitation-only reception at Heritage’s Capitol Hill headquarters, where the think tank’s leaders also thanked its longtime president, Edwin J. Feulner, for returning to the helm last year during the search that resulted in her selection.

The more than 300 guests included well-known Washington figures such as Attorney General Jeff Sessions, who sat in the front row of Heritage’s Allison Auditorium and moved toward James to shake her hand as she returned to her seat.

In her remarks, James described becoming Heritage’s president as the culmination of her personal journey and professional career.
James has served over three decades in government, academia, and the private sector.

For the past decade, she also had headed the Gloucester Institute, a leadership training organization in Gloucester, Virginia.

On Jan. 1, she formally took the reins of The Heritage Foundation from Feulner, who introduced her.

“I inherited scholars and staff that are the most driven and dedicated team that anyone could ever hope to lead,” James said.

“President Reagan paid us a very special compliment when he said, and I quote: ‘Success in politics is about issues, ideas, and the vision we have for our country and the world. In fact, the very sum and substance of the work of The Heritage Foundation.’”
________________

By comparison, President Obama earned 43% approval on this date in the second year of his presidency.

http://www.rasmussenreports.com/public_content/politics/trump_administration/prez_track_feb27
Posted by Frances Rice at 11:52 AM