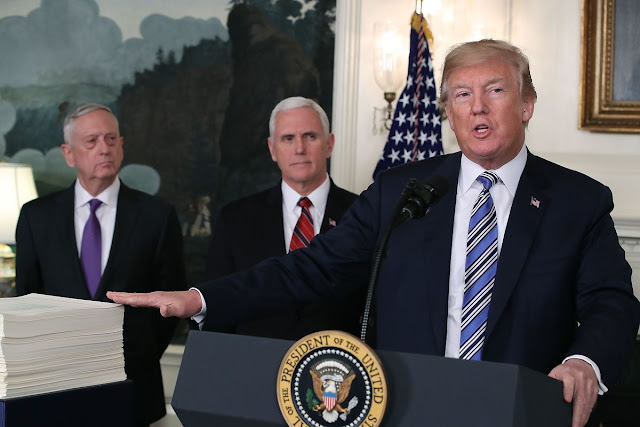 President Donald Trump understands clearly that the survival of our nation depends on our country being militarily and economically strong.  The Obama Administration took actions that severely weakened our military and economy. We elected Trump to be our president and he is working to make our country economically and militarily strong again.

Below is an article about the $1.3 trillion budget bill with excessive spending that Trump signed reluctantly because it provided much needed funding for our military.  Also below are facts about Trump’s other recent accomplishments he made on behalf of the people of America.
________________

President Trump signed the $1.3 trillion omnibus spending bill Friday despite an earlier threat to veto the legislation due to the lack of border wall funding and a fix for DACA.

Trump signed the mammoth legislation reluctantly, saying in a press availability with other members of the administration that, in order to secure a necessary increase in military spending, he had to give money to Democratic projects that he derided as a "wasted sum of money."

"It's not right and it's very bad for our country," he said.

But he said that military spending was very important, and that concern overrode his thoughts about vetoing the legislation.

“Therefore, as a matter of national security, I've signed this omnibus budget bill. There are a lot of things I’m unhappy about in this bill…But I say to Congress, I will never sign another bill like this again. I'm not going to do it again,” he said.

He also called on Congress to end the filibuster in the Senate and to give him a line item veto.

“To prevent the omnibus situation from ever happening again, I'm calling on Congress to give me a line item veto for all government spending bills," he said. "And the Senate must end -- they must end -- the filibuster rule and get down to work.”

Trump had tweeted earlier Friday that he was considering using the veto, saying that recipients of the Obama-era Deferred Action for Childhood Arrivals (DACA) program “have been totally abandoned by the Democrats.” He added that the border wall, which he said was "desperately needed for our National Defense" is not fully funded.

The House adjourned Friday morning until Monday, meaning that if Trump had vetoed the bill then the government would shut down.

Trump moved to end the DACA program in September, giving Congress a six-month window to come up with a legislative fix. That deadline has been delayed by court orders, but the fate of the 800,000 enrolled recipients is still uncertain.

Trump addressed DACA recipients at the press availability: "Republicans are with you," he said, before accusing Democrats of blocking efforts to fix DACA "every step of the way."

The White House has tried to use the DACA issue to convince Democrats to support approximately $25 billion in funding for Trump’s central campaign promise. But a congressional GOP source told Fox News talks broke drown after Democrats pushed for a path to citizenship to include also those who are currently eligible -- expanding those covered to 1.8 million.

The spending bill passed by Congress includes only $1.6 billion for border measures -- much of which is for repairs to already existing fencing. It explicitly rules out any new prototypes of the kind President Trump viewed this month in California. But House Speaker Paul Ryan, R-Wis., and the White House pushed back against conservative concerns on Thursday, saying it provided for 100 miles of border construction.

Democrats had claimed victory on the issue, pointing to the fact that Trump's requests for new deportation agents and detention center beds had gone unanswered, although they had expressed disappointment at the failure to get a DACA fix in the bill.

The deal has also irked more conservative members of Congress, who objected to the size and cost of the bill (which ran in at over 2,000 pages) as well as the failure to remove funding for Planned Parenthood and so-called "sanctuary cities."  Other Republicans approved of the deal, pointing to a massive increase in military and infrastructure spending as well as funding to help combat the nation's opioid crisis.

Trump’s veto threat was totally unexpected, particularly as the White House had signaled Trump would support the bill if passed by Congress. Most lawmakers have already left Washington for a two week recess. Some are on overseas trips already.

o   President Trump made Secretary DeVos in charge of a commission to look at long term solutions, including age restriction on certain firearm purchases.

o  The Treasury Department sanction 18 Russian individuals and entities accused of interference in the 2016 presidential election and undermining the countries cyber security.

o  The President issued an order, pursuant to the Defense Production Act of 1950, preventing Broadcom’s hostile foreign takeover of the American company Qualcomm.

“Six months ago, I promised that we would cut taxes to bring Main Street roaring all the way back, and we did.”
– President Donald J. Trump

The President held a roundtable discussion on tax cuts and tax reform in St. Louis, Missouri. President Trump listened to a range of different voices to hear how tax reform has changed lives for Missourians.

“Families right here in Missouri will save more than $4 billion in taxes, and that's just for this year alone. Four billion dollars right in Missouri. And millions of workers are getting more bonuses, higher wages, and more take-home pay,” President Trump said to the roundtable at the Boeing Company.

President Trump traveled to San Diego, California, where he got a firsthand look at border wall prototypes.

He also met with immigration officials and took their input on what it takes to make our border safe again.

The President is fulfilling a promise to the American people by securing our border and keeping our nation safe. “It will save thousands and thousands of lives, save taxpayers hundreds of billions of dollars by reducing crime, drug flow, welfare fraud, and burdens on schools and hospitals.

The wall will save hundreds of billions of dollars — many, many times what it’s going to cost,” the President said while looking at the wall prototypes.

“Every child deserves to grow up in a safe community surrounded by a loving family and to have a future filled with opportunity and with hope.”
– President Donald J. Trump

President Trump is making sure our schools are safe and secure, just like our airports, stadiums, and government buildings.

o  Imposed sanctions on Russians engaged in cyberattacks on the U.S. election process in 2016.

o   This follows the signing legislation over the summer to impose new sanctions on Russia, and ordering the closure of Russian consulates in the U.S.

o   Sanctioned Russians who participated in the Russian incursion in Ukraine.

o   Personally approved the largest sale of lethal weapons to Ukraine in years (Congress authorized such sales in 2014, but the Obama admin never followed through).

o  Bolstered the NATO alliance by increasing funding, and cooperation with NATO partners.