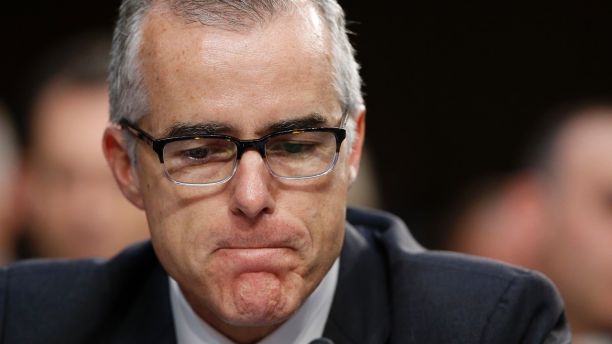 “Andrew McCabe FIRED, a great day for the hard working men and women of the FBI - A great day for Democracy. Sanctimonious James Comey was his boss and made McCabe look like a choirboy. He knew all about the lies and corruption going on at the highest levels of the FBI!” Trump tweeted hours after Attorney General Jeff Sessions announced the dismissal.

McCabe was fired just days before he would have been eligible for a lifetime pension after it was determined that he lied to investigators reviewing the bureau’s probe of Hillary Clinton’s email server.

"Pursuant to Department Order 1202, and based on the report of the Inspector General, the findings of the FBI Office of Professional Responsibility, and the recommendation of the Department’s senior career official, I have terminated the employment of Andrew McCabe effective immediately," Sessions said in a statement.

He went to say that after reviewing the reports, it was “McCabe had made an unauthorized disclosure to the news media and lacked candor − including under oath − on multiple occasions.”

"The FBI expects every employee to adhere to the highest standards of honesty, integrity, and accountability. As the OPR proposal stated, 'all FBI employees know that lacking candor under oath results in dismissal and that our integrity is our brand,'" Sessions said.

Soon after his firing, McCabe hit back in a fiery response of his own.

"This attack on my credibility is one part of a larger effort not just to slander me personally, but to taint the FBI, law enforcement, and intelligence professionals more generally," McCabe said. "It is part of this Administration’s ongoing war on the FBI and the efforts of the Special Counsel investigation, which continue to this day. Their persistence in this campaign only highlights the importance of the Special Counsel’s work.”

McCabe said he and his family have been the targets of unrelenting attacks on their reputation and his service to the U.S.

"Articles too numerous to count have leveled every sort of false, defamatory and degrading allegation against us,” he said. “The President’s tweets have amplified and exacerbated it all. He called for my firing. He called for me to be stripped of my pension after more than 20 years of service. And all along we have said nothing, never wanting to distract from the mission of the FBI by addressing the lies told and repeated about us. No more."

McCabe's firing marked a stunning fall for a man who was No. 2 at the bureau for a time under former FBI Director James Comey, ran it and even was reportedly on Trump’s short list for the directorship.

But McCabe has also been mired in controversy in recent years.

Sessions’ decision to fire McCabe came as Justice Department Inspector General Michael Horowitz concluded a bureau oversight investigation, with a report expected to be critical of McCabe’s handling of the Clinton email probe, his handling of the bureau during the early months of the Russia investigation, and his ties to the Democratic Party.

Horowitz determined that McCabe hadn't been forthcoming in regard to the handling of the FBI’s probe into Clinton’s use of a private email server while she was secretary of state in the Obama administration.

Horowitz’s investigation, which landed McCabe in hot water, faults the former deputy director for the way he answered questions about his approval for interactions between an FBI official and a reporter about the bureau’s investigation into the nonprofit Clinton Foundation.

McCabe was “removed” from his post as deputy to FBI Director Christopher Wray in January, setting in motion a plan to leave the bureau after months of conflict-of-interest complaints from Republicans — including President Trump.

White House press secretary Sarah Sanders said Thursday that the decision was entirely up to Sessions, but that McCabe was a "bad actor."

"That's a determination we [left] up to Attorney General Sessions, but we do think that it is well documented that he has had some very troubling behavior and has been a bad actor," Sanders said.

McCabe became acting director of the FBI after Trump fired Comey on May 9, 2017. McCabe led the bureau, independently, until Aug. 2, 2017 — during the early months of the investigation into Russian meddling in the 2016 presidential election and potential collusion with Trump campaign associates.

Republicans have also long criticized McCabe for his ties to the Democratic Party — his wife received donations during a failed 2015 Virginia Senate run from a group tied to a Clinton ally, former Virginia Gov. Terry McAuliffe — all while the Clinton email probe was underway.

“How can FBI Deputy Director Andrew McCabe, the man in charge, along with leakin’ James Comey, of the Phony Hillary Clinton investigation (including her 33,000 illegally deleted emails) be given $700,000 for wife’s campaign by Clinton Puppets during investigation?” the president tweeted in December.

The president was “not a part of the decision making process,” when McCabe was removed from the bureau in January, press secretary Sanders said.

“McCabe testified before the committee in December 2017 that no surveillance warrant would have been sought from the [FISA court] without the Steele dossier information,” the memo read. The Steele dossier was unverified, and financed as opposition research by the Democratic National Committee and the Clinton campaign.

The text messages suggest that as of Sept. 28, 2016, Strzok, Page and McCabe were aware of new Clinton emails found on the laptop of disgraced former U.S. Rep. Anthony Weiner, spouse of Hillary Clinton aide Huma Abedin.

“Got called up to Andy’s earlier … hundreds of thousands of emails turned over by Weiner’s atty to sdny, includes a ton of material from spouse. Sending team up tomorrow to review…this will never end …” Strzok wrote in a text message to Page.

But it wasn’t until Oct. 27, 2016 that Comey was briefed on the newly discovered emails — meaning McCabe kept the director in the dark for a month.

Horowitz is specifically investigating McCabe and whether he wanted to avoid taking action on the laptop findings until after the presidential election, in which Clinton lost to Trump.

According to testimony obtained by Fox News from an Office of Special Counsel interview with former Comey Chief of Staff James Rybicki, McCabe’s office did not notify him until the night of Oct. 26, 2016.

The OSC also interviewed FBI Deputy General Counsel Trisha Anderson, who testified that Comey was first briefed on the material found on Weiner’s laptop on Oct. 27, 2016.

Anderson noted that the director’s office decided to “urgently” address the situation.

“Given the significance of the matter, um, uh, that we had to proceed quickly,” Anderson told investigators. “It was just too, too explosive for us to sit on.”

So it wasn’t until Oct. 28, 2016, that Comey sent a letter to Congress announcing the “recent developments” of the discovery of the Clinton and Abedin communications found on the laptop —which he had just been briefed on a day before. That letter reopened the Clinton email probe just a week before the election. The inspector general is investigating McCabe’s involvement in this timeline.

Several Republicans also have pointed with alarm to the Strzok-Page texts and their references to McCabe in relation to an “insurance policy” to prevent Trump from being elected president, and a “secret society” within the bureau.