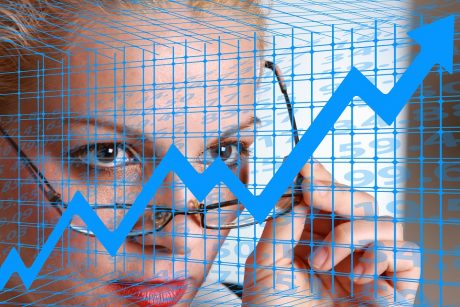 The Dow recorded its biggest one-day point gain since 2008 on Monday, as reports of trade talks between the U.S. and China reduced fears of a possible trade war.

The rally followed the worst week for equities in more than two years, driven in part by investors’ concerns about U.S. tariffs targeting China.

President Donald Trump announced on Thursday that he approved of a plan to impose tariffs on about $50 billion in Chinese imports. China responded by saying it would pursue reciprocal tariffs, targeting $3 billion in U.S. goods such as steel, wine and pork.

But U.S. Treasury Secretary Steven Mnuchin told Fox News that he has spoken to Chinese officials, adding that he’s “hopeful” the two sides can reach an agreement on trade.

Reports suggest that the U.S. is seeking greater access to Chinese markets as part of the negotiations.

“Trade policy will remain in focus as investors watch to see if tensions escalate, with negative implications for the broader global economy, or whether tensions ease as counter parties maintain a constructive dialogue,” Ameriprise Chief Market Strategist David Joy said in a note to clients.

The surge in stocks also came at the beginning of a holiday-shortened trading week. Markets will be closed at the end of the week for Good Friday.

Shares of Facebook ended the day higher, rising 0.4%, after suffering heavy losses last week. The company is under a microscope for its data privacy policies.

Microsoft rallied 7.6% in reaction to a report from Morgan Stanley, whose analysts raised their price target for the company’s shares and predicted that Microsoft would hit $1 trillion in market value over the next 12 monthsOpens a New Window..

General Electric was the lone member of the Dow with red ink on Monday. Shares fell 1.4%, slipping to their lowest level since 2009.

FOXBusiness.com’s Ken Martin and Leia Klingel contributed to this report.