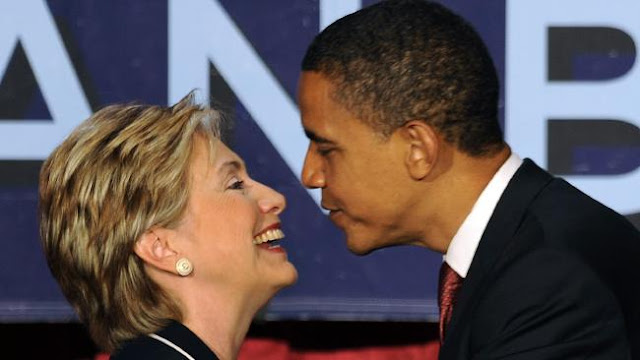 Trump Dossier: With each new revelation, a picture of the Russian scandal emerges: Not only were Hillary Clinton's campaign and the Democratic National Committee up to their necks in collusion with Russians to undermine then-candidate Donald Trump, but President Obama was in on the action, too. Is this where collusion becomes conspiracy?

Sounds just like what Hillary Clinton and the Democratic National Committee did in 2016, right?

In fact, Hillary was a Janey-come-lately to that ploy. Obama did it first in 2012. Using his Obama for America campaign front, Obama paid Perkins Coie close to a million dollars, which was reportedly used to pay — who else — Fusion GPS to find salacious stuff about Obama's foe in the 2012 election, the ultra-square Mitt Romney.

But, according to a new book by progressive journalists Michael Isikoff and David Corn, "Russian Roulette: The Inside Story of Putin's War on America and Donald Trump's Election," not only did Fusion do opposition research, something every campaign does, it also did aggressively hostile opposition donor research.

"In 2012, then-President Obama had an 'enemies list' on his campaign website with the names of Mitt Romney's biggest donors," noted PJ Media's Debra Heine.

That enemies list was placed on the Obama campaign's Orwellian "Truth Team" web site. The site called them a "group of wealthy individuals with less-than-reputable records. Quite a few have been on the wrong side of the law, others have made profits at the expense of so many Americans..."

That kind of vilification of decent, law-abiding, successful Americans is bad enough. But to drive home the intimidation, each of the names on the list was subsequently tweeted out from the @TruthTeam2012 twitter feed, along with their supposed misdeeds, most of which really amounted merely to tough or unpopular business decisions they had to make.

Obama "relied on a vast grassroots network to coerce, bully, boycott and vilify individuals lawfully taking part in the political process, just as his own donors and supporter are freely allowed to engage," wrote the Daily Signal back in 2012.

Imagine for a moment the chilling effect that would have on a political foe's campaign — calling those who fund another campaign's candidate "enemies," with all that entails. The IRS, the SEC, the FBI, the Justice Department, all with active prosecution arms, all headed by Obama loyalists. To say it's an act of political and personal intimidation is an understatement.

Obama's fingerprints go beyond that, however.

The Isikoff-Corn book suggests that the infamous relationship between former British spy Christopher Steele, Fusion GPS and the FBI  was forged by Obama officials at the State Department — in particular former Assistant Secretary of State for European and Eurasian Affairs Victoria Nuland, who gave permission to the FBI to talk to Steele in London, and former U.S. Deputy Assistant Secretary of State Jonathan Winer, who "worked as a middleman to bring Mr. Steele together with Sidney Blumenthal, a fierce Hillary Clinton defender. Mr. Winer spoke with Ms. Nuland, who gave a heads up to Secretary of State John Kerry."

How much do you want to bet that Kerry, a cabinet member, reported all this to former President Obama?

By the way, both Nuland and Winer worked for Clinton at the State Department, and both have since left.

And the notorious Trump dossier that resulted from putting Steele together with the FBI, Fusion and the Clinton campaign led to a wiretap of the Trump campaign and also now serves as the centerpiece of a year-and-a-half long Mueller investigation into Trump — one that has now spilled over its boundaries, looking into things that have nothing to do with Russian meddling in the 2016 election.

The genius of it all is that, at the same time they were using spurious Russian contacts to smear Trump's name, they were also launching the FBI investigation into phony allegations of collusion between the Trump campaign and the Russians in 2016.

The only collusion, in short, was between the Clinton campaign, Steele and the Russians.

But what we now see clearly is this entire scheme wasn't just cooked up by a Nixonian Hillary Clinton, trying her best to destroy her political foe.

No, it was part of a pattern set by President Obama and copied by his able student, Hillary.

The Obama-adoring media knew what Obama had done in 2012, but barely bothered to report at the time.

This goes beyond mere creepy political collusion, or dirty campaign capers. It suggests a broader Democratic scheme to use government resources to hamstring opposition political campaigns and, now, to destroy a presidency.

And this conspiracy spans two presidential campaign cycles and two separate opposition presidential candidates, using remarkably similar tactics and even the same law firm and research operation. With a number of government officials knowingly involved, this, in short, reeks of conspiracy to subvert the election process.