Adam Schiff goes to Washington to impeach a president 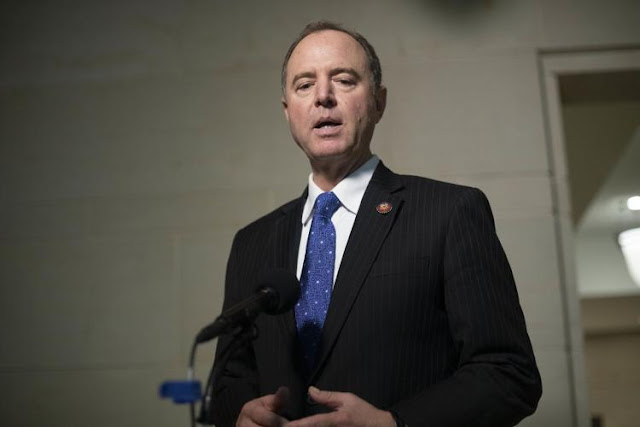 "The left is coming after me because I supported the Clinton impeachment. All of Schiff's money is out-of-state Democrat money given to him to take me out. The truth is the truth.”
– James Rogan

Most of America is wondering how a politically obscure Adam Schiff from a district nestled in the shadows of the San Gabriel Mountains in California maneuvered himself into a position where he could make life miserable for a president just because he wanted to? The answer is simple: This is politics of the worst kind. Following the impeachment of Bill Clinton, in the House election of 2000, Democrats made defeating Jim Rogan their highest priority. Adam Schiff was delegated as Clinton’s hatchet-man on the left coast. And Schiff has been paying interest on the debt he owes to his party and the Clintons ever since. When Hillary Clinton lost to Donald Trump, they told Schiff, “It’s time to pay the debt in full.”

Because of his reputation and respect in Washington with both parties, Rogan was selected to head the house committee in Clinton’s impeachment trial. When Clinton was acquitted in 1999 of perjury and obstruction of justice charges, the Clintons vowed to take Jim Rogan out. And together with a loyal pack of national leftist operatives, they engineered the biggest funneling of Democratic money into a single U.S. House race in American history. To distance them from Clinton’s affairs, they picked Adam Schiff, a fledgling leftist party lapdog as their pawn to checkmate Rogan’s career.

But why did Democrats pick Adam Schiff over more qualified candidates? Few in the Beltway ever heard of him. Those who did only knew he was a state senator who had lost two previous state assembly races, lived under the Hollywood sign, and had the same name as a guy on Law & Order. But insiders knew differently. Schiff was covertly beefing up his resumé in blue state politics hoping to move on to the national leftist stage. It was as if this part was written for him. He eagerly wanted to play the role of hangman. Since he was outside Clinton’s political circle, the part was cast perfectly for him.

The election of 2000 was the most noxiously repugnant, clandestine and brutal campaign in U.S. history. From the day the party tossed Schiff’s Dodgers cap into the ring, the left’s propaganda machine was in overdrive to defame Rogan. They were on a mission not to just defeat him, but to destroy him. Bill Clinton even held a fundraiser in Washington for Schiff. This was the first time in history a president hosted a fundraiser for a congressional candidate who was not an incumbent.

“I am here because nobody wants to put the Lewinsky matter behind us more than I do.”
– Bill Clinton

During the first debate between Rogan and Schiff, the moderator focused on issues the winner was to face in Congress the next year. The town hall was packed with Democrats who badgered and berated Rogan from the time he stepped on stage. They demanded he address impeachment. But Rogan wouldn’t take the bait: “That’s not why we’re here. Why is the Lewinsky affair now my prime identification?” The crowd boisterously chanted, “We demand a ‘shift’ in Congress”. Rogan eagerly replied: "I'm more proud to have served on House impeachment than anything else I've ever done."

In a district poll taken after the town hall, it was clear that Democrats had been able to convince left coast voters this election was a referendum about Rogan’s role in Clinton’s impeachment, nothing more. Seventy percent said they wouldn't vote for Jim Rogan because of impeachment. The reality set in. The deluge of Democratic money from around the U.S. proved the left would mortgage their national headquarters if needed be to buy this election.

Rogan told reporters, “My opponent has $6 million in out of state money in his war chest to accuse me of terrible things. Yes, I made a lot of Democrats angry by supporting impeachment, but I've angered a lot of Republicans at times also.”

Soon, Schiff had so much money in his coffers it became evident it would be Schiff’s election to lose. Rogan's hard-line conservatism and Schiff's far-left liberalism were never mentioned. Democrats made this a down and dirty impeachment referendum. Schiff operatives eagerly worked day and night registering voters, holding rallies, and had yard signs everywhere. The LA Times ran a picture with numerous Schiff signs planted next to the entrance of famed Forest Lawn Cemetery.

As Gomer Pile once said, the left had one last “big surprise!” The largest white ethnic group in the district was Armenian. They had voted GOP since 1989 when George Deukmejian was governor. Democratic operatives met with the National Armenian Committee and said if they endorsed Schiff, he’d secure state funds for a documentary about the 1920s Turkish genocide of Armenians. That was “the elephant in the room.” The most expensive race for a U.S. House seat had become a national race, and Adam Schiff unseated Jim Rogan, 53 percent to 44 percent of the vote.

Upon taking his seat, Schiff quickly assumed key roles on subcommittees and committees with an eye on chairman of the House Permanent Select Committee on Intelligence and the Appropriations Committee. Since the left didn’t control Congress until after the election of Barack Obama, Schiff sat on his hands, waiting for his time to come. When Donald Trump defeated Hillary Clinton, Schiff grinned from ear to ear. We’ve heard the story repeated in the media like a broken record played on a Happy Days juke box.

“Would someone kick that thing, or play another record?”
– The Fonz

It’s been said “those who live in glass houses shouldn’t throw stones.” And when Adam Schiff was appointed by Nancy Pelosi as the ranking Democrat on the panel to investigate Clinton’s Benghazi faux pas, the self-anointed honest and ethical former prosecutor showed his true colors were blue. Although the Democrat’s own report found compound security was compromised, Schiff adamantly defended their presumptive presidential nominee from any blame. Schiff evaded every question about her “lost emails”? One reporter said, “Schiff protected Clinton as if she was his stepmother.”

Everyone knows why Adam Schiff came to Congress. For two years, he tried to dream up collusion between Donald Trump and Russia. Once that fairytale ended, Schiff moved on to his next hoax: a phony quid pro quo between Donald Trump and the president of Ukraine. And now we’ve learned Schiff performed a rehearsed parody on facts about Trump’s phone call at the impeachment inquiry; he has proven this is nothing more than a leftist witch hunt. This is further evidence Adam Schiff is not and never will be an unbiased arbitrator and should recuse himself posthaste.

“Schiff claims he wants to find the truth, but spends all day attacking everyone who questions him.”
– Rudy Giuliani

Schiff’s continued bypassing of legal due processes with his impeachment obsession is a violation of his oath of office and a blatant assault on the rights of Americans for government transparency. A recent public opinion poll revealed that 93 percent of voters who support impeachment are Democrats. Schiff’s refusal to conduct nonpartisan hearings is something he and his party could regret next election if they don’t take control of Congress and the oval office. There is nothing more serious than impeachment, and the American people are fed up with Adam Schiff’s political chess games. This kind of partisanship is destroying the people’s government.