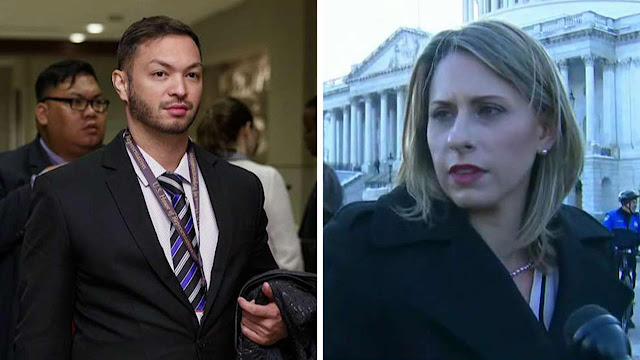 Rep. Katie Hill, D-Calif., announced her resignation Sunday after a string of reports shining a negative light on her personal life, including a reported affair with her legislative director that sparked a House Ethics Committee investigation.

Hill tweeted on Sunday evening, “It is with a broken heart that today I announce my resignation from Congress. This is the hardest thing I have ever had to do, but I believe it is the best thing for my constituents, my community, and our country.” She is expected to step down by the end of this week.

The congresswoman last week had fought back against reports of an affair with the congressional staffer, as well as reports she was in a so-called “throuple” relationship with husband Kenny Heslep and a campaign staffer.

House Speaker Nancy Pelosi, D-Calif., issued a statement saying, “Congresswoman Katie Hill came to Congress with a powerful commitment to her community and a bright vision for the future, and has made a great contribution as a leader of the Freshman class.”

“She has acknowledged errors in judgment that made her continued service as a member untenable,” Pelosi wrote. “We must ensure a climate of integrity and dignity in Congress, and in all workplaces.”

This past Thursday, the political fallout for Hill escalated as more compromising photos of the freshman lawmaker surfaced. The Daily Mail published one photo of what appeared to be Hill undressed and holding a bong, and another of her kissing the campaign staffer.

The photos emerged shortly after the conservative website RedState.org posted screenshots of several text messages between Hill and the staffer detailing the reported end of their three-person relationship earlier this year and reported on intimate pictures including a nude photo of Hill brushing the staffer’s hair.

According to the texts that were shown, Hill wanted to focus on her work and suggested that “political risk” was a factor.

Fox News has not verified the authenticity of the photos.

Hill, in the letter announcing her resignation, wrote: “This is what needs to happen so that the good people who supported me will no longer be subjected to the pain inflicted by my abusive husband and the brutality of hateful political operatives who seem to happily provide a platform to a monster who is driving a smear campaign built around cyber exploitation.”

She continued, “Having private photos of personal moments weaponized against me has been an appalling invasion of my privacy. It’s also illegal, and we are currently pursuing all of our available legal options.”

Hill, an openly bisexual congresswoman and the vice chairwoman of the powerful House Oversight Committee, admitted Wednesday she had an “inappropriate” relationship with the female campaign staffer.

In a letter sent to constituents on Wednesday and obtained by Fox News, Hill acknowledged that in the final years of what she called an “abusive marriage,” she began a relationship with the unnamed campaign staffer.

Heslep filed for divorce from Hill earlier this year.

“I am going through a divorce from an abusive husband who seems determined to try to humiliate me,” Hill said in her statement last week. “I am disgusted that my opponents would seek to exploit such a private matter for political gain. This coordinated effort to try to destroy me and the people close to me is despicable and will not succeed. I, like many women who have faced attacks like this before, am stronger than those who want me to be afraid.”

RedState also reported earlier this month that Hill had an extramarital affair with Graham Kelly, her legislative director and former campaign finance director, for at least a year. Heslep was said to have shared his own screenshot of a text exchange he had with a friend who had heard about the affair; it was later deleted from his Facebook account.

The reported affair with a congressional staffer prompted the House Ethics Committee investigation.

According to RedState, the alleged affair was why Heslep filed for divorce. Hill has denied the affair with Kelly.

RedState also published a series of purported late-night texts in which Heslep called into question Hill’s drinking. Other texts showed the female staffer involved in the “throuple” expressing concerns about Hill's drinking.

“I know that as long as I am in Congress, we’ll live fearful of what might come next and how much it might hurt,” Hill wrote in Sunday’s statement. “That’s a feeling I know all too well. It’s the feeling I decided to leave when I left my marriage, and one I will not tolerate being forced upon others. I can no longer allow my community, family, friends, staff, supporters, and especially the children who look up to me as a role model, to suffer this unprecedented brand of cruelty.”

She went on to apologize.

“For the mistakes made along the way and the people who have been hurt, I am so sorry, and I am learning – I am not a perfect person and never pretended to be. It’s one of the things that made my race so special,” Hill wrote. “I hope it showed others that they do belong, that their voice does matter, and that they do have a place in this country.”

The Republican challengers for Hill's congressional seat have pounced on the controversy as they sought to win back one of the many districts the Democrats took in the 2018 midterm elections.

“Katie Hill did the right thing by resigning from Congress,” challenger Mike Garcia said in a statement Sunday. “The past week has been a complete distraction from the important work that needs to be done, and it’s time for our district to move forward and unite around a leader.”

In a statement reacting to Hill’s resignation, Angela Underwood-Jacobs, a Republican council member in Lancaster, Calif., said Hill “blatantly violated the trust of voters of the 25th District which is why I was the first of her opponents to call on her to resign.”

Another GOP candidate, Mark Cripe, said in a statement that the news of Hill’s resignation “affords California’s 25th district an opportunity to move forward in a positive direction, with new representation that better hears and supports all the families of Antelope, Santa Clarita, and Simi valleys.”

George Papadopoulos, the former foreign policy adviser for President Trump who served 12 days in federal prison for lying to federal investigators, also weighed in on Hill's controversy. Papadopoulos, who recently moved to California with his wife, has stirred speculation that he might challenge Hill for her seat in 2020.

“I’m smelling blood in the water now that Katie Hill has resigned,” Papadopoulos tweeted Sunday. “California’s 25th congressional district is wide open for the taking. Someone has to step up. I love my state too much to see it run down by candidates like Hill. All talk, no action, and a bunch of sell outs.”

https://www.foxnews.com/politics/rep-katie-hill-resigns-amid-ethics-probe-into-reported-affair-with-staffer
Posted by Frances Rice at 10:26 AM