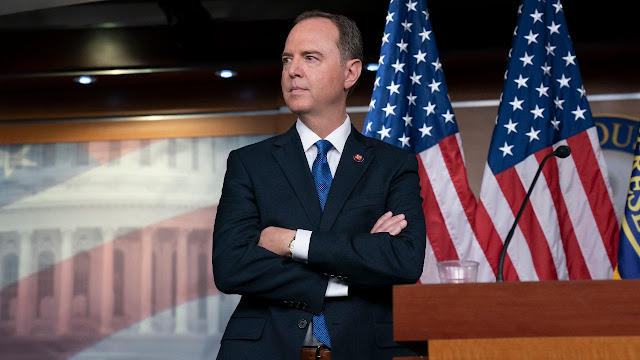 A spokesman for House Intelligence Committee Chairman Adam Schiff, D-Calif., acknowledged for the first time on Wednesday that the whistleblower alleging misconduct in the White House had reached out to Schiff's panel before filing a complaint -- prompting President Trump, in an extraordinary afternoon news conference at the White House, to accuse Schiff directly of helping write the document.

An aide to Schiff insisted that when Schiff mentioned "we" had not spoken to the whistleblower, he was referring to members of the full House intelligence committee, rather than staff. NBC National Security reporter Ken Dilanian flagged Schiff's explanation as "deceptive" late Wednesday.

"It shows that Schiff is a fraud. ... I think it's a scandal that he knew before," Trump said, as the president of Finland stood at an adjacent podium. "I'd go a step further. I'd say he probably helped write it. ... That's a big story.

FLASHBACK: Adam Schiff lies, insists: “we have not spoken directly with the whistleblower”https://youtu.be/qOSF3qMieBA

Referring to Schiff  -- a Trump antagonist who has long claimed to have surefire evidence that Trump illegally conspired with Russians -- as "Shifty Schiff," Trump characterized Democrats' impeachment inquiry as a "fraudulent crime on the American people." (Earlier in the day, Trump described the inquiry as "BULLS---," and mocked Schiff as a partisan "lowlife.")

At the press conference, Trump suggested Schiff had a "mental breakdown" and may have committed a crime by reciting an inaccurate, exaggerated version of a transcript of Trump's fateful July call with Ukraine's leader -- a move that Schiff himself later apologetically acknowledged was a "parody."

Schiff defenders are claiming there’s nothing to see here in the revelation that the whistleblower conferred with Schiff staff before filing the complaint. If that’s so, why didn’t Schiff acknowledge the contact when asked about it?

PRANK CALLER TRICKS SCHIFF INTO THINKING HE HAS DIRT ON TRUMP

Trump also called Joe and Hunter Biden "stone-cold crooked," citing Hunter Biden's lucrative business dealings in Ukraine while his father was vice president. Trump went on to threaten litigation concerning what he called false accusations by "the fake news media" and "in many cases, the corrupt media."

"He knew long before, and he helped write it too. It's a scam."
— President Trump

Responding to Trump's comments, whistleblower attorney Mark Zaid said in a statement to Fox News: "I can unequivocally state that neither any member of the legal team nor the whistleblower has ever met or spoken with Congressman Schiff about this matter.”

INTELLIGENCE WATCHDOG NOW CLAIMS WHISTLEBLOWER HAD FIRSTHAND INFORMATION, IN DEPARTURE FROM PREVIOUS SUBMISSIONS TO CONGRESS -- INCLUDING THE COMPLAINT ITSELF

The whirlwind day in Washington kicked into gear when The New York Times reported earlier Wednesday that Schiff "learned about the outlines" of the whistleblower's complaint "days before" it was filed.

Speaking to Fox News, Schiff's office denied that the intelligence committee had reviewed or received the complaint in advance, but largely confirmed the Times' reporting.

“Like other whistleblowers have done before and since under Republican and Democratic-controlled Committees, the whistleblower contacted the Committee for guidance on how to report possible wrongdoing within the jurisdiction of the Intelligence Community," Patrick Boland, a spokesman for Schiff and the House Intelligence Committee, told Fox News. "This is a regular occurrence, given the Committee’s unique oversight role and responsibilities. Consistent with the Committee’s longstanding procedures, Committee staff appropriately advised the whistleblower to contact an Inspector General and to seek legal counsel."

Boland went on to assert that the whistleblower should be "commended."

Other GOP sources told Fox News that the development was unsettling and undermined the integrity of the Democrats' ongoing impeachment inquiry.

"This is totally unsurprising," a Republican official close to the matter told Fox News on Wednesday. "Schiff was clearly involved in orchestrating this from the very beginning."

Republicans have suggested other Democrats besides Schiff may have had advance notice. House Republican Conference Chairman Liz Cheney, R-Wyo., on Monday pushed for answers on how much top Democrats knew about the explosive White House whistleblower's complaint before it was officially made, after House Speaker Nancy Pelosi's head-turning comments during a televised interview on Sunday.

"He told me it was perfect, that there was nothing on the call," Pelosi, D-Calif., said on CBS News' "60 Minutes," referring to a conversation she had with President Trump before the Trump administration released either

"But, I know what was in the call," Pelosi continued, before quickly adding, "I mean, uh, it was in the public domain."

Pelosi's remark drew scrutiny from Republicans because no verbatim account of Trump's call had yet been made publicly available.

"@SpeakerPelosi said on 60 Minutes last night she knew the details of the classified Ukraine call before White House released transcript," Cheney tweeted. "This is starting to seem like a political set up. So, Madame Speaker, 'what did you know and when did you know it?'”

Speaking to Fox News, Pelosi communications director Ashley Etienne said the House speaker was referring only to publicly available information, and that Cheney had misinterpreted the question Pelosi had been asked. Etienne insisted that to her knowledge, Pelosi was not made aware of the whistleblower complaint or the contents of the transcript before they were publicly released.

The inspector general for the intelligence community said earlier this week that the whistleblower claimed to have firsthand knowledge of misconduct -- a claim that appeared to conflict with documents sent to Congress and the director of national intelligence.

The lengthy statement Monday was posted in response to questions, raised in the media and by congressional Republicans, about the disclosure form filed by the whistleblower, who first flagged concerns about President Trump's July phone call in which he asked the leader of Ukraine to "look into" actions by the Bidens. The IG said the whistleblower stated on an initial form Aug. 12 "that he or she possessed both first-hand and other information."

However, the declassified whistleblower complaint sent to Congress last week stated: "I was not a direct witness to most of the events described. However, I found my colleagues’ accounts of these events to be credible because, in almost all cases, multiple officials recounted fact patterns that were consistent with one another."