African Americans and the Economy under Trump 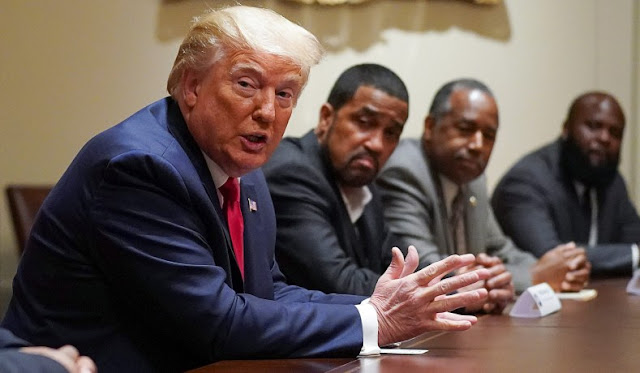 Then-president Donald Trump speaks during a roundtable discussion with Secretary of Housing and Urban Development Ben Carson (second from right) and conservative black supporters in the Cabinet Room at the White House, June 10, 2020. (Kevin Lamarque/Reuters)

Democrats may not have noticed how the black community benefited from this economy, but black voters sure did.

It has been six months since President Trump left the White House and Democrats are still race-baiting the former president and Republicans. Representative Byron Donalds (R., Fla.) was yet another target of Democrats’ wrath in this respect after he was denied entry into the Congressional Black Caucus because of his continued support for President Trump.

There are those who want you to believe, as President Biden said during the election, that Donald Trump was “one of the most racist presidents” ever and that the Republican Party is just as bad. Nothing could be further from the truth. Simply take a look at the economic record of the last four years.

Before COVID-19 severely impacted our social and economic lives, black Americans were seeing real benefits from lower taxes and lower regulation. The unemployment rate for blacks reached a record low of 5.2 percent and black labor-force participation reached 63.2 percent, the highest it had been since the 2008 recession.

The poverty rate for black Americans also reached record lows, while a total of 1 million lifted themselves out of poverty between 2016 and 2019. Over the same period, real median household income for black families rose over $4,000 after actually falling over the previous 14 years (2002–2016). With incomes rising so fast, it should not be surprising that black homeownership skyrocketed to 47 percent, another mark not reached since the 2008 recession.

While countless Americans benefited from the blue-collar boom ignited by Republican economic policies, black Americans fared particularly well, especially compared with their experience during the Obama economy. Then, black median weekly earnings grew just 1.8 percent on average, which was less than the 2.1 percent growth for white earnings. Under President Trump’s pre-pandemic economy, however, black median weekly earnings grew 4.1 percent on average — higher, in fact, than the 3.4 percent earning growth for whites.

The exceptional economic success that bolstered black American families during that period was no accident. President Trump worked closely with black leaders like me to craft an agenda that would help our communities realize our dreams. Consider just a few significant examples.

First, the Tax Cut and Jobs Act of 2017 created nearly 9,000 opportunity zones in which capital gains on long-term investments are taxed at zero. Each of these opportunity zone census tracts, which had to be nominated by state governors and certified by the secretary of the treasury, had to have a poverty rate of at least 20 percent or a median income less than 80 percent of that in the state. The selected opportunity zones ultimately had an average poverty rate almost double that of more-affluent communities in the state and were home to a higher share of black and Hispanic households.

The incentives created by these opportunity zones helped raise $75 billion in capital for underserved communities in their first two years — enough to create approximately 500,000 jobs — and were on track to lift 1 million people out of poverty.

Second, Republicans passed the most sweeping criminal-justice-reform legislation in a generation: the First Step Act. This landmark legislation reformed the sentencing laws that have wrongly and disproportionately harmed black communities for decades. Black communities want law and order, and building trust in our criminal-justice system is one of the best ways to promote public safety. The First Step Act gave nonviolent offenders the chance to reenter society as productive, law-abiding citizens.

Finally, President Trump, along with Republicans in Congress, made key strategic changes to strengthen our historically black colleges and universities — including moving the federal Historically Black Colleges and Universities Initiative back to the White House, fully forgiving $322 million in disaster loans to HBCUs, and enabling faith-based HBCUs to receive equal access to federal support. Trump also signed the FUTURE Act which, with strong bipartisan support, made $255 million in annual funding for HBCUs permanent and increased funding for the Pell Grant program. Other legislation also included $100 million for scholarships, research, and centers for excellence at HBCUs.

Democrats may not have noticed all the work Republicans did for the black community, but black voters sure did. Between 2016 and 2020, Trump doubled his support among black women and received almost 20 percent of the vote of black men. No other Republican has come close to these numbers for decades.

In spite of what you may hear, black people do not want open borders, we don’t want to defund the police, and we don’t want higher taxes and more spending.

Entrepreneurship, innovation, skills training, economic sustainability, and generational wealth creation are equally as important in the black community as in any other in America. That is what Republican policies delivered and it can be the foundation of a truly multicultural middle-class party for decades to come.