Why Leftists Love To Hate America 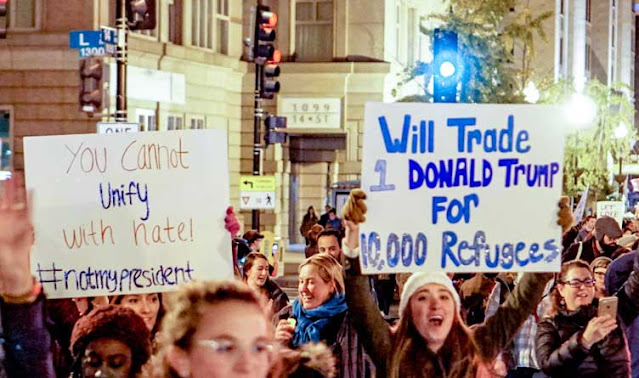 Most Americans feel chills up and down their spines when they pledge allegiance to our flag and sing their national anthem. Americans expressed their love of country and mourned together after the attacks of 9/11 that killed 2,977 people. They flew flags in their honor for months. How many flags did the leftists fly? If they don’t love America, what do they love? According to the socialists and progressives, they love the planet, anything green, mother nature, power and—-themselves.

On July 3, 1776, John Adams wrote to his wife, Abigail, “I am apt to believe that it (Independence Day)  will be celebrated, by succeeding Generations, as the great anniversary Festival. It ought to be commemorated, as the Day of Deliverance by solemn Acts of Devotion to God Almighty. It ought to be solemnized with Pomp and Parade, with Shews, Games, Sports, Guns, Bells, Bonfires and Illuminations from one End of this Continent to the other from this Time forward forever more.”

Most Americans celebrated the birthday of the greatest nation on the earth on July 4th with their flags flying high in the warm summer breeze and with other acts of reverence for living in the greatest nation in the world. Yet, other Americans were burning their flags and condemning this gracious lady, America: the one that has shared her gifts of freedom and liberty with nations around the globe since her founding.

U. S. Representative Cori Bush (D-MO), a member of the Democrat’s self-anointed far-left U. S. House of Representatives' “Hit Squad” said, Independence Day is “not about celebrating freedom for all Americans.” America is a “stolen land.” And in America “black people aren’t free.” “When people say Independence Day is for celebrating freedom, they mean it is for white people only. Black people don’t have anything to celebrate.”

Bush is a typical far left socialist progressive who routinely publicly espouses critical anti-American hate. Bush, who rose from being a nurse to one of the highest offices in America, celebrated the passage of the Biden-Harris’s Juneteenth federal holiday bill by demanding reparations.

Although the left will never miss an opportunity to blame their hatred for America on President Donald Trump, that is wishful thinking. It is simply a convenient excuse to scourge, ridicule and castigate a nation that is better than they are. At the Women’s March in Washington the weekend after Trump’s inauguration, pop star Madonna said, “I have thought an awful lot of blowing up the White House.”

Long before Trump’s election, hatred for America had consumed the left. After WWII when Europe was rebuilding and adopting democratic governments, liberal college professors accused the United States of “nation building.”  Returning military service members who attended these universities found the schools  had been colonized with socialist and communist academics. And those academics were eagerly cultivating hatred for America.

During the 1960s, while realizing segregation was a sinful moral failing, Republicans and various Northern Democrats set out to remedy it. Congressional Republicans worked with President John F. Kennedy to pass a civil rights bill despite the continued disruptive objections by Southern segregationist Democrats.

By 1964, after having passed civil rights legislation in the 1860s, Republicans had passed four additional civil rights bills, starting with the 1957 Civil Rights Law, that segregationist Democrats had been able to destroy. But when segregationist President Lyndon Johnson was forced into the national limelight to sign the 1964 Civil Rights Act, or else, the genius of the far left was to perceive a new moral imperative to identify itself with. This enabled them to cover up their brutal past sins against black America since the 1800s. This horrific past included terrorizing and killing blacks, using the Ku Klux Klan, and enacting Jim Crow laws after overturning in 1894 the civil rights laws of the 1860s that had been enacted by Republicans.

Democrats claim they made history signing the 1964 Civil  Rights Act. But they only made history by doing what they wouldn’t do in the 1800s, and even thwarted what Republicans did. The left anointed themselves masters of America’s moral legitimacy. Leftist opportunists, would set future terms for moral legitimacy in America regardless of Constitutional legality, or the will of the majority. From that moment on, the liberal left gave itself the privilege of redeeming America from its past mortal sins; and yes—-“the vary sins the left committed!”

Love of America is the one dividing line between the left and conservatives. According to recent Department of Defense data, almost two thirds of enlisted service men and women hail from red states. And a vast majority are from Southern states. Obviously, the south was not a sore loser after the Civil War.

For many leftists, hateful anti-Americanism has become a self-congratulatory lifestyle. New York Gov. Andrew Cuomo recently told a reporter that, “America was never that great for anyone of color. Some still don’t even believe that America is a racist nation. Discrimination is everywhere.”

For radical groups like Antifa and Black Lives Matter, hatred of America is a rallying call, to enforce their racial identity. They use this to gain support from disgruntled millennials, and national corporations. They  direct much of their anti-Americanism towards law enforcement. Defunding the police is a religious ritual for all leftist Democratic politicians; regardless of its consequences in cities across our nation.

Of course for leftists, hate is a free pass. Conservative speakers are shouted down, and assaulted, on college campuses. Republican officials are harassed in restaurants, in the street, and in front of their homes. Certain leaders on the left like leftist Rep. Maxine Waters (D-CA) are self-appointed practitioners of hate. She urges her congregation to think of hatred as their liberal empowerment.

Liberals describe America as racist, sexist, homophobic, imperialist, genocidal, and obsessed with capitalism compared to Scandinavian and European nations. No moral person could ever love a place like America! That’s why conservatives love America: because its not how leftists perceive it.

The leftists universally applaud quarterback Colin Kaepernick as their hero for refusing to stand for  the national anthem at NFL games since he defied American tradition. Even Nike, the athletic shoe giant canonized him by making him their brand model. We all know what the left and liberal media would say if anyone would publicly refuse to celebrate Dr. Martin Luther King Day or Juneteenth.

The leftists hate America so much they all want to change it. In 2008, Barack Obama was going to “fundamentally change” America. Sen. Elizabeth Warren (D-MA)  announced she will “transform government,” with “Accountable Capitalism.” Sen. Bernie Sanders (D-VT) said he will “transform America.” Yet, none explain the reason for or agree about why they hate America so much that they have to totally remake America.

Thomas Jefferson said, “Bigotry is the disease of ignorance.” America is the world’s greatest nation due to capitalism. It has the greatest religious and political tolerance of any democracy. Even so, the left hates everything and everyone that made America so great, and vows to fundamentally change it.

Most Americans feel chills up and down their spines when they pledge allegiance to our flag and sing their national anthem. Americans expressed their love of country and mourned together after the attacks of 9/11 that killed  2,977 people. They flew flags in their honor for months. How many flags did the leftists fly? If they don’t love America, what  do they love? According to the socialists and progressives, they love the planet, anything green, Mother Nature, power and—-themselves.

“In the 1960s the left convinced itself that there is something fascist about patriotism and there was something perversely patriotic about running down America and burning its flag.”–Jonah Goldberg