Biden has a crime problem and a police problem 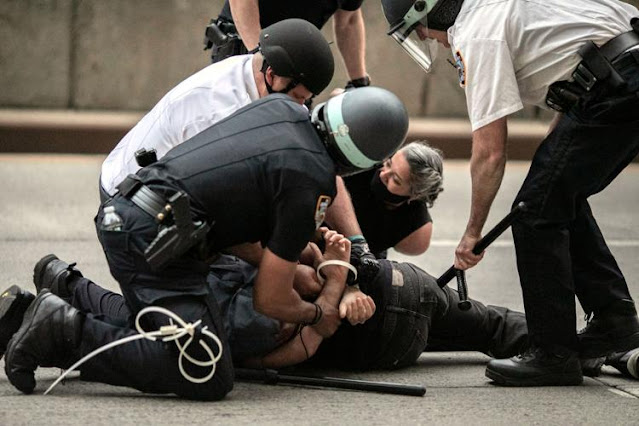 Police arrest a protester refusing to get off the streets during an imposed curfew while marching in a solidarity rally calling for justice over the death of George Floyd Tuesday, June 2, 2020, in New York. - Wong Maye-E / AP photo

“Blessed are the peacekeepers, for they shall be called the children of God.”

With violent protests erupting around the nation, then U.S. Sen. Kamala Harris and a myriad of other high profile progressive politicians and leftist groups scheduled their own protests. They also asked people to donate money to bail these criminals out of jail. Harris tweeted, “If you are able to, please chip in to the @MNFreedomFund to help post bail for those protesting in Minnesota on May 30th."

A day after the riots ravaged the nation, Joe Biden's Democratic campaign bragged that they gave donations to Minnesota Freedom Fund to bail out those who were jailed after the Minneapolis riots.

"I believe that the practice of posting cash bail is just a modern day debtors prison.”

Before the pandemic, the U.S. economy experienced its longest growth period in modern history. Unemployment was the lowest in decades, the stock market was up and inflation was down. Since this was an election year, the left took advantage of this tragic opportunity to retool their message. The left turned the election into one focused on racism, social injustice, and attacking the police.

Instead of helping calm the rioters and restore peace in America, the left's misinformation machine went into overdrive. They promulgated the rioting, burning and looting of America as a protest against Donald Trump and Republicans. They ranted this message at every whistle-stop. To win, they needed to drown out Trump's message about his many foreign and domestic victories.

"Cities are burning, are you watching? I stand with Minneapolis. This is our change."

Reports from Axios News estimate that the vandalism, looting, and burning of communities across the U.S. will cost insurance companies more than any organized violent acts of crime in our history. Claims adjustor Loretta Walters said, "This is the first multi-state catastrophe we've ever declared."

Recently, a member of a group accused of plotting to kidnap the Michigan governor was rumored to be a white supremacist. The media had a field day with this. But the continual deadly, violent street crimes by radical attackers upon innocent Americans daily got less ink than a church bingo game.

"People will adjust to defunding the police. Change takes courage.”

In September, a report by U.S. Crisis Monitor concluded that activist group leaders from BLM and Antifa they talked with, retorted that Biden's election will have no effect on community violence. It was their opinion that this violence will not only be sustained but it will get worse as the year goes on. Yet this gruesome revelation received no mention on any major cable or TV network in America?

Biden and the Democrats based their entire election on race, fairness, woke ethics, LGBT rights, redistribution of wealth, punishing the police, increased government subsidies and taxing the rich.

They promised America if they took back the government and defunded the police, street crimes and violent acts by groups such as BLM and Antifa would cease. So what actually happened? We all know.

"When a man repeats a promise again and again, he means to fail you."

Since Biden took office, over half of all major cities report they are experiencing higher rates of violent crime. The Major Cities Chiefs Association predict that many cities are set to outpace last year's numbers. In Chicago, homicides are up 33%, and shootings nearly 40%. New York Police Department data show murders jumped 14% and shootings 50%. LAPD's Rosario Cervantes confirmed, in Los Angeles, homicides increased 36% and hate crimes against Asians increased over 150%.

When Biden promised to deliver peace and prosperity if Democrats won the brass ring, how come we are seeing increased violent crimes, personal assaults, robberies, shootings and homicides?

The director of the National Association of Police Organizations blames Democrats and Biden for the current increase in crime. "He has gone off the deep end" with the type of reforms that he and Congress are trying to enact. Bill Johnson, director of the Police Benevolent Association chapters said "Biden has gone too far left with his rhetoric on law enforcement and we cannot do our jobs."

The Police Executive Research Forum shows retirements are up 45% and resignations increased 20% while hiring fell below 5% since Biden took office. They concluded that low morale is the main cause for the sharp increase in resignations and retirements. Officers say they've been demonized. Morale is low and officers fear for their lives. If they fight off attacks they will be accused of abuse?

Under pressure from advisers, Biden recently met with state leaders and urged them to use billions of relief funding to "hire more officers." Biden called on them to use the money to finance more overtime pay, to buy better weapons and spend more on recruiting new applicants.

"With our reform bills and gun control bills, officers will work smarter in our urban communities."

Biden’s strategy went over like a lead balloon with many at the forum. They claimed that funding is not the problem. Attendees expressed concerns with the "non-stop rhetoric from Congress about defunding departments, criticism of officers trying to do their job, and the media's biased coverage of incidents."

They believe retirements and resignations will continue and drive away applicants.

Author Shannon Alder opined, “Intelligence is anticipating how your message will be perceived.”

During the last election, every progressive promised to defund the police including Harris. Although Biden never did join the "defund chorus", he never once defended the police. Biden took sides with the far left on cutting back budgets and using the money to fund community programs.

When the nationwide riots first erupted, the left should have helped quell the violent storm before it became a tornado. Instead, they chose to preach the merits of defunding local police departments. Now, that is coming back to haunt them. But the real victims are innocent Americans.

These people paid for protection. Now they are being deprived of it.

"Police officers put the badge on every morning, not knowing for sure if they'll come home at night to take it off."