Make No Mistake: Donald Trump Will Always Be America's Champion 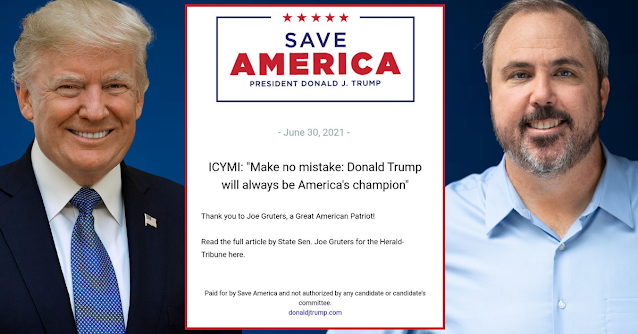 Regardless of what former President Donald Trump chooses to do down the road, he will always be America’s champion. He will always fight for the forgotten American – and Sarasota will always be a special place for him.

After all, it was the Republican Party of Sarasota County that gave Donald Trump its Statesman Award in 2012, long before he ran for president. And then we gave it to him again in 2015, shortly before he announced his run. We knew he was a great American even then.

The Trump Florida campaign headquarters in 2016 was based in Sarasota, and he visited during both the beginning and end of his campaign. The president won Sarasota by 26,000 votes in 2016 – and he expanded that to a 28,000-vote victory margin in 2020 while increasing his vote total in Sarasota County by nearly 24,000 votes. I was fortunate to be the co-chair of the successful Trump Florida 2016 campaign.

So you can see why it just makes sense for former President Trump to return to Sarasota on July 3 at Robarts Arena to restart his history-busting rallies. We are honored to be a part of this new adventure for the president because we know that he will continue to fight for America – and for the average Americans who have long been forgotten by the elite ruling class.

He will put America and the American people first in whatever he pursues.

Maybe most significantly we celebrate the freedom of speech and ability to assemble together with others; rights that we Americans cherish in our First Amendment – and rights that are under assault right now. Donald Trump fought to protect these rights as president, and Gov. Ron DeSantis courageously fights for these same freedoms for Florida, making our state a shining light for America (which itself continues to be a shining city on a hill for the rest of the world).

It’s important to break through the din of a four-year onslaught of political attacks, relentless media negative coverage and fake scandals – which have been shown to be wrong again and again –  to realize that Donald Trump was an extraordinarily successful president. His list of major accomplishments during just one term in office is simply awesome.

Before COVID – the response to which wrecked the global economy – the U.S. economy under President Trump was surging. He cut taxes for middle-class Americans, dumped overly burdensome business regulations and developed fairer trade agreements. All of these steps served as rocket fuel for the economy, and they resulted in a record-shattering economy benefitting all Americans.

• Unemployment for women hit its lowest rate in 70 years.

• Nearly 7 million people were lifted off of food stamps.

• The income inequality gap actually fell for two straight years as those at the lower end saw the fastest pay increases.

President Trump also created stability at the southern border and we now see the wisdom of those policies. He led the nation into energy independence and appointed constitutionalist judges.

Maybe the most astonishing and unexpected accomplishment of Trump's presidency was setting the Middle East on a path to peace – which President Joe Biden has now begun to unravel by giving the mullahs in Iran everything they want to reload their terrorist campaigns. By brokering peace agreements that include trade deals between Israel and several Arab countries, President Trump was solving something that had baffled every American president since the end of World War II.

Once COVID began to overrun the world, President Trump launched Operation Warp Speed to get a vaccine to market before the end of the year. In a familiar story the critics uniformly said it was impossible – and once again Trump proved the critics wrong.

On this score it’s worth noting that it is Trump, and not his critics, who continues to be proven right. Here is a brief list of items that President Trump was bashed for by critics – but on which he has turned out to be right:

• China was responsible for the Wuhan virus, and the virus may have indeed been man-made.

• The stories about Hunter Biden’s laptop were true.

• There was a Russian bounty on U.S. troops.

• Russian collusion with the Trump campaign did not take place.

• Lafayette Square was not cleared with tear gas for a photo op.

On Saturday, July 3 at Robarts Arena in Sarasota, Florida is a perfect opportunity to celebrate President Trump’s successes in office –domestically and around the world – and to celebrate both his tenure and our country’s enduring freedoms.