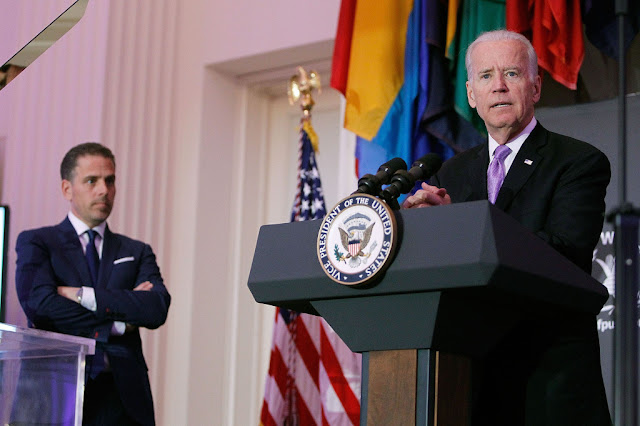 There is a major allegation that Hunter Biden used access to his father to seal previously unknown deals with Mexican businessmen, including Carlos Slim, a billionaire, once briefly considered the richest man in the world, and one of the principal owners of the New York Times. He bailed the Times out when the paper was in financial distress. This observation is correct, and infuriating:

This story has emerged in the latest round of Hunter Biden emails:

The new emails include references to the use of Air Force II by Hunter Biden to pursue the deals — a similar pattern revealed with regard to the China dealings. The emails detail a number of visits to Mexico, including a February 2016 flight on Air Force II with his father. On the plane was his business partner Jeff Cooper, who ran Illinois-based SimmonsCooper.
***
These dealings continued into 2018 as Hunter pushed for deals with Slim. One text message from July 24, 2018 reads “Spoke to my dad about ‘Slim ask’” and Cooper responds “Oh that sounds SO F’ING GOOD.”

Will we ever find out what Carlos Slim’s “ask” was? Sadly, probably not. In the meantime, we know that Joe Biden’s denials that he had anything to do with his son’s influence peddling are lies. 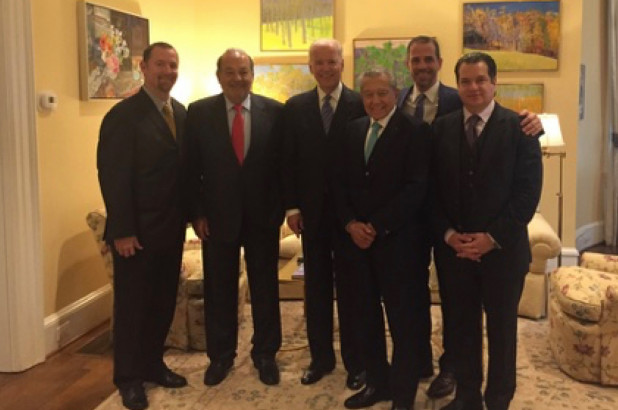 The new emails contain additional information directly contradicting President Biden. In addition to earlier pictures from golf trips and references to his involvement or knowledge, new material refers to a notable dinner arranged in Washington, D.C.

Hunter arranged for then Vice President Biden to have dinner on April 16, 2015 with his Ukrainian, Russian and Kazakhstani business associates. They appropriately chose a private room at Café Milano, a Georgetown restaurant that brags that it is “Where the world’s most powerful people go.” After the dinner, Hunter received an email from Vadym Pozharskyi, an executive with the Ukrainian energy company Burisma, to thank him for introducing him to his father: “Dear Hunter, thank you for inviting me to DC and giving an opportunity to meet your father and spent [sic] some time together. It’s realty [sic] an honor and pleasure.”

It is clear that Hunter Biden was selling access and influence. It appears that Joe Biden was aware of that effort.

I have said it before, but it bears repeating: no one has ever bribed Hunter Biden. He is a poor, lost, drug-addled soul who likely would be unemployable but for the fact that his father is a well-known politician. His role was to act as a bagman, lining up and collecting bribes for his father in the form of “business deals” with the Red Chinese and operators like Carlos Slim.

We can imagine a parallel universe in which American “journalists” are able to put aside their loyalty to the Democratic Party and look into the question whether we have a president who is hopelessly compromised by bribes he has taken from foreign powers, starting with the Chinese Communist Party. But that, sadly, is not the world we live in. 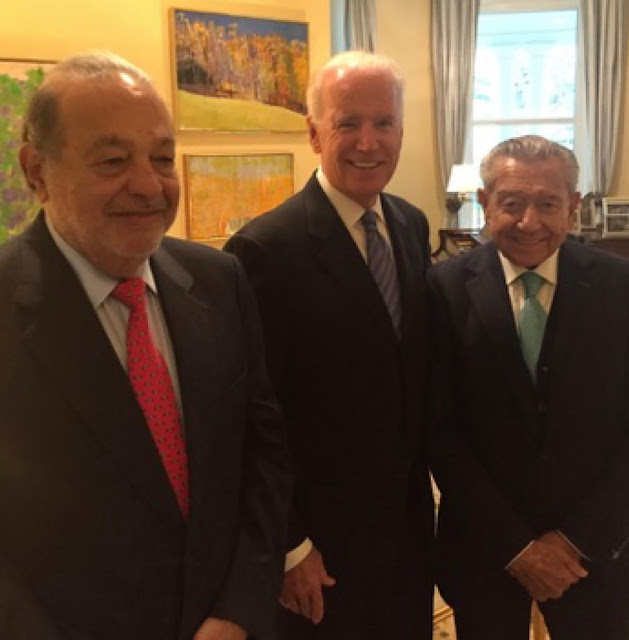 PHOTO: Close-up of Carlos Slim with Joe Biden in 2015

Hunter Biden used the perks of the vice presidency — parties, meetings with Joe Biden and flights on Air Force Two — to pursue business deals with Mexican billionaire Carlos Slim while his father was in office, records show.

Hunter’s involvement with Slim, at one time the world’s richest man, commenced soon after a White House state dinner the magnate attended in May 2010, along with Joe Biden and his wife, Jill, to honor Mexican President Felipe Calderon.

The diary on Hunter’s abandoned laptop shows he and Slim were both guests at a State Department luncheon during Calderon’s visit, which was hosted by his father and then-Secretary of State Hillary Clinton. Spanish tenor Placido Domingo also reportedly attended.

The charmed path that always opens for Hunter when his father meets a foreign leader or oligarch led him to Mexico on a VIP trip the following year. Hunter’s diary in May 2011 shows a “tentative tour hosted by Carlos Slim” of the tycoon’s private “Soumaya Museum,” in Mexico City, which Slim founded and named after his late wife, Soumaya Domit. Containing priceless sculptures from pre-Spanish Mesoamerica, it is the most visited museum in the country. There could be no greater honor offered to Hunter than a private tour with the billionaire founder.

Hunter also had breakfast with Slim’s friend, Mexican billionaire Carlos Bremer, at his magnificent villa in the shadow of the Sierra Madre Oriental mountain range in Monterrey. Bremer, former director of the country’s stock exchange, had donated millions of dollars to the Clinton Foundation and sat on the foundation’s board.

Hunter subsequently would hold in-person and video conference meetings with Slim’s sons, Carlos Jr. and Tony Slim, between 2011 and 2015, although the laptop does not indicate what came of the encounters.

Hunter would visit Mexico again in March 2012, April 2013, September 2014 and February 2015. His final recorded flight to Mexico City was with his father aboard Air Force Two in February 2016. Hunter’s business partner Jeff Cooper, who ran one of the largest asbestos litigation firms in the country, Illinois-based SimmonsCooper, was on the flight. Hunter owned 3 percent of Cooper’s venture capital firm Eudora Global, according to emails.

Earlier that year, Hunter and wife Kathleen had stayed at Magnani’s Acapulco mansion. 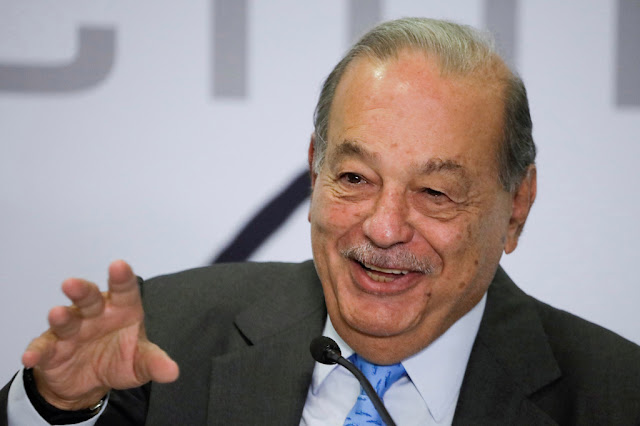 This was also around the time that Carlos Slim became the largest shareholder in The New York Times.

Jim emailed Hunter on May 7, 2015, about a deal that would involve Slim and a Mexican state-owned oil and gas firm, Petroleos Mexicanos (Pemex). “Have a very real deal with Pemex (Carlos Slim) need financing literally for a few days to a week,” he wrote.

“Have the seller (refinery /slims) and buyer major being delivered from pipeline in (h/ USA) Nothing is simple but this comes very close. As always the devil is in the detail! Any interest on the long skirts part?”

Uncle Jim still was hopeful of a Slim windfall in 2017 when he sent Hunter a “short list of foreign friends for next phase.” The list included Slim, whom Jim described as “very friendly” and “arguably the richest man in the world.”

Hunter and Cooper were hoping for Slim family money for Cooper’s online gaming company Ocho Gaming and digital wallet firm ePlata, in which Hunter had a 5.25 percent stake through his firm Owasco.

“Just wondering who is the best first major partner outside [the Aleman family’s airline] Interjet. Obviously [the] Slims provide that if we could actually sell them on the idea and not have them just take it and create their own,” Hunter emailed Cooper in February 2015. It was Gabriel Zinny from Democratic lobbying firm Blue Star Strategies who first suggested selling Cooper’s gaming interests to Carlos Slim, whose firm Telmex was entering the online gaming business.

“Below is an article from today’s press about Slim getting into the business in Mexico,” Zinny wrote to Cooper in April 2012, forwarding a Reuters piece headlined “Tycoon Slim taps online gaming market in Mexico.”

“It sounds like a potential good exit strategy for your investment.”

Zinny also was acting for another of Hunter’s wealthy Latin American associates, Manuel Estrella, owner of construction consortium Grupo Estrella and listed by Forbes as one of the top 20 richest entrepreneurs in the Dominican Republic.

In an email in December 2012, Hunter introduced Estrella to Cooper as “a good friend of mine” and “the perfect partner as you explore bringing online gaming to the Dominican Republic.”

Zinny followed up with his own email to Hunter: “Thank you so much Boss! Just talked to Manuel [Estrella] who was really excited. You are too generous with your latinos fans!!”

Estrella once had expressed interest in investing in a “new hotel” in Haiti with Hunter’s company Rosemont Seneca and the “Clinton-Bush Haiti Fund.”

“He would like to invest in this new hotel, giving Rosemont Seneca an equity participation and bringing the Fund as a potential investor,” Zinny wrote Hunter on Oct. 28, 2010. The deal doesn’t appear to have occurred and communications with Estrella cease in August 2015.

But in 2018, Hunter still was optimistic about making money from his Slim connections. Despite Joe Biden claiming he’s never discussed his son’s business with him, there’s a text message from July 24, 2018, on the laptop:

“Spoke to my dad about ‘Slim ask,’ ” Hunter wrote Cooper after a visit from his father in Los Angeles. “Oh that sounds SO F’ING GOOD” replied Cooper.

Miranda Devine’s book, “Laptop from Hell: Hunter Biden, Big Tech, and the Dirty Secrets the President Tried to Hide,” is out in September.