Buckle Up, Democrats: The Left's Demoralizing Attacks on Conservatives May Reap the Whirlwind 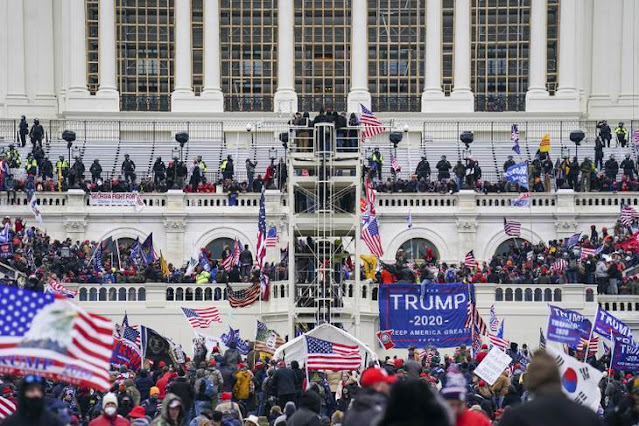 In a lengthy and revealing Twitter thread, Darryl Cooper, host of The MartyrMade Podcast, recounted his understanding of the “Boomer-tier Trump supporters who believe the 2020 election was fraudulent,” the perspective of “most of the people at the Capitol on 1/6.” He did not endorse the Capitol riot or the claims that the election had been stolen, but he did highlight how so many Trump supporters reach that conclusion.

How did the very people who pride themselves on their pocket Constitutions end up storming the Capitol on January 6? The story goes back to the 2016 election.

First, Cooper noted that “The FBI spied on the 2016 Trump campaign using evidence manufactured by the Clinton campaign,” namely the Steele dossier, which FBI officials knew was fake and uncorroborated. Those involved in the Russiagate scandal — FBI Director James Comey, CIA Director James Brennan, Democrats like Adam Schiff — “were on TV saying they’d seen clear evidence of collusion w/Russia, while admitting under oath behind closed doors that they hadn’t.”

While many Trump supporters at first “were worried there must be some collusion, because every media & intel agency wouldn’t make it up out of nothing,” when the truth of the story came out, “people expected a reckoning, and [they] shed many illusions about their government when it didn’t happen.”

“The [Department of Justice], press, & gov’t destroyed lives and actively subverted an elected admin,” Cooper related. This massive public betrayal led “people whose political identity was largely defined by a naive belief in what they learned in Civic class” to “see the outline of a Regime that crossed all institutional boundaries.”

“It’s hard to describe to people on the left (who are used to thinking of gov’t as a conspiracy… Watergate, COINTELPRO, WMD, etc) how shocking & disillusioning this was for people who encourage their sons to enlist in the Army, and hate ppl who don’t stand for the Anthem,” Cooper added.

Many Trump supporters “don’t know for certain whether ballots were faked in November 2020, but they know for absolute certain that the press, the FBI, etc would lie to them if” it happened. “They watched the press behave like animals for four years. Tens of millions of people will always see Kavanaugh as a gang rapist, based on nothing, because of CNN. And CNN seems proud of that. They led a lynch mob against a high school kid. They cheered on a summer of riots.”

Then Democratic officials took advantage of the COVID-19 pandemic to change voting procedures. “After the collusion scam, the fake impeachment, Trump ppl expected shenanigans by now,” Cooper argued. “Then you get the Hunter [Biden] laptop scandal. Big Tech ran a full-on censorship campaign against a major newspaper to protect a political candidate.”

“Stories about Trump being pissed on by Russian prostitutes and blackmailed by Putin were promoted as fact, and the only evidence was a document paid for by his opposition and disavowed by its source. The NY Post was banned for reporting on true information,” he noted.

“The reaction of Trump ppl to all this was not, ‘no fair!’ That’s how they felt about Romney’s ‘binders of women’ in 2012. This is different. Now they see, correctly, that every institution is captured by ppl who will use any means to exclude them from the political process,” Cooper argued. “And yet they showed up in record numbers to vote. He got 13m more votes than in 2016, 10m more than Clinton got! As election night dragged on, they allowed themselves some hope. But when the four critical swing states (and only those states) went dark at midnight, they knew.”

Cooper noted that many “grifters and media scam artists” sold Trump supporters “conspiracy theories” after the election, but the legacy media and Big Tech made things worse. “Everything about the election was strange – the changes to procedure, unprecedented mail-in voting, the delays, etc – but rather than admit that and make everything transparent, they banned discussion of it.”

“If everything about the election dispute was the same, except the parties were reversed, suspicions about the outcome would’ve been Taken Very Seriously. See 2016 for proof,” Cooper argued.

To recap, Trump supporters saw an entrenched bureaucracy subvert Trump’s administration from day 1, with the support of an extremely hostile legacy media. They saw the media demonize conservatives at every turn, from Brett Kavanaugh to Nick Sandmann to Amy Coney Barrett. They saw Democrats and the media wink at political violence during the Black Lives Matter and antifa riots last year.

Then, in the 2020 election, they saw the Democrat-media complex collude to pull the levers behind the scenes by changing election rules and funneling money into blue areas. They saw Big Tech and the legacy media work overtime to bury the legitimate Hunter Biden story, and they saw Big Tech work to silence all questions about the legitimacy of mail-in voting.

None of this is to justify the rioters who physically attacked the Capitol, who deserve to be condemned and prosecuted in the same manner as antifa and Black Lives Matter rioters who burned businesses to the ground and attacked federal courthouses. The Capitol riot was a disgrace, though it was not an “insurrection,” and even though many of those at the Capitol on January 6 truly were peaceful protesters.

Yet the Capitol riot represented the outcry of Americans who lost all hope in the electoral process, the U.S. government’s dedication to justice, and the media’s dedication to the truth. During the Trump years, many conservatives became so disillusioned with the system that they started thinking there was a Regime that used outright lies to undermine Trump and silence the will of the people.

After the Capitol riot, the signs may have only gotten worse. Now, the legacy media is denying that Marxist critical race theory (CRT) is a threat to the education of children. The Biden administration is pushing CRT in education, in the military, and throughout society. The Biden efforts against “extremism” in the military and against “domestic terrorism” in America seem targeted at conservatives — and Facebook has started its own campaign against “extremism,” eerily echoing the administration.

Meanwhile, companies and institutions are going “Woke” with alacrity. It’s not just Hollywood pushing every leftist agenda in films and television, anymore. Not only does the legacy media continue to deny any concerns about the 2020 election, but it is echoing Democrats’ absurd rhetoric condemning election integrity laws as “Jim Crow on Steroids,” and corporations are following suit. Major League Baseball pulled the All-Star Game out of Georgia because of a mild election integrity law that imposed far fewer voter restrictions than Biden’s home state of Delaware.

I have vociferously opposed political violence, and the Democrats’ horrific double standard on the Capitol riot is beyond the pale. Democrats act as though the Capitol riot represented a 9/11-level threat. Biden called it “the worst attack on our democracy since the Civil War.” Yet Democrats treated the thugs who burned down buildings (occasionally with people inside) during the George Floyd riots with kid gloves, condemning police for supposedly overreacting to “peaceful protests.”

These horrendous lies and double standards are the last things that Republicans who have lost their faith in the fairness of elections, in the justice of the government, and in the modicum of truth they still expected from the media need to see. Oftentimes, it feels as though every institution in America is ganging up to crush conservatives under its boot.

If this relentless assault on conservative values does not stop, it will awaken a sleeping giant. I fervently pray that the backlash will take place at school board meetings, city council meetings, and the ballot box, rather than in acts of political violence like the Capitol riot. My fellow conservatives cannot afford to prove the Left’s heinous lies about our “extremism” correct. No, we have to win by following the rules of the game — but I sincerely fear that the Left is doing everything it can to pound us down until we do something we cannot take back.