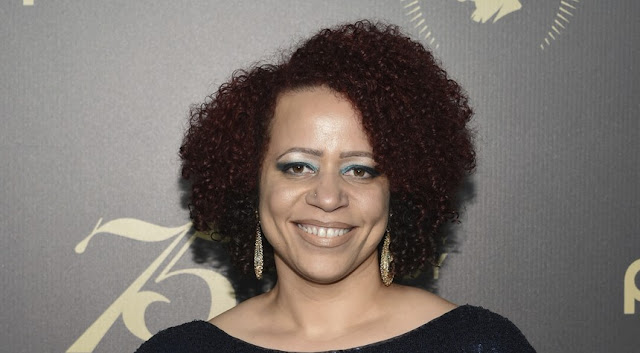 Nikole Hannah-Jones, the racist fabulist behind the corrosively divisive and inaccurate 1619 Project, recently spoke at Washington-Liberty High School in Arlington, Va. For a 45-minute litany of real and imagined grievances, racial victimhood hectoring, and fake history, Hannah-Jones raked in a cool $40,000. At least that’s what was likely the content of Hannah-Jones’ speech, but we will never know for sure, as she forbade recording of her sage remarks on pain of a $100,000 fine. No one seems to have violated this prohibition, but Hannah-Jones did get her 40 grand. For those of you who were raised on Common Core math, that’s $888.88 per minute. Why didn’t the high school pay Hannah-Jones an even thousand dollars a minute? Systemic racism, natch!

Or maybe not. The Daily Wire reported Thursday that Hannah-Jones’ easy-money windfall at Washington-Liberty High School was even better than her outrageously exorbitant speaker fee, for the high school is “only eight miles from Howard University, where she became a tenured professor with the help of $20 million in donations from the MacArthur, Knight, and Ford foundations.” Yet despite the fact that getting there didn’t require her to take a long flight, check into a hotel, or do much of anything beyond taking a pleasant walk from her office, “including travel time, that fee amounts to approximately $10,000 an hour.” On top of that, “the speech was also an opportunity for Hannah-Jones to sell her book, even as the event implied that it was ‘banned.’”

Banned. Sure, and I’m Barack Obama. Leftists love to posture as victims and to pretend that it’s 1953 and that they’re courageous lone holdouts against crushing conservative conformity, but it isn’t 1953; it’s 2022, and they are the dominant establishment everywhere. If Washington-Liberty High School wants to feature a banned speaker, I hereby volunteer to come speak for 45 minutes about why Islamic jihad is a much greater terrorism threat than “white supremacy.” Heck, nobody even has to pay me $40,000. I’ll come at my own expense, completely gratis. What’s that now about “banned speakers” again?

Nikole Hannah-Jones, despite the fact that she has the dough rolling in from right-thinking Leftists everywhere, did not offer to speak free of charge. On the contrary, her astronomical fee caused a bit of friction amid the race victimhood lovefest. The Daily Wire notes that although it was held at the high school, “the talk was a program of the Arlington Public Library, and the cost was so enormous that it spurred tension between the library and the Friends of Arlington Library, a nonprofit that raises money to fund library activities including author events.” That’s good to know; it’s reassuring that at least some people involved in this remain at least marginally sane.

It seems that Hannah-Jones’ fee pushed the speaker program $7,500 over budget. But Hannah-Jones was duly paid; the Leftist officials involved in setting up her speech weren’t about to do something so white supremacist as to ask her to take a lesser fee in light of their straitened circumstances or even simply to defer payment of the whole amount until the library had raised some additional funds. To have done something like that would have been the very height of poor taste; one does not make demands, or even polite requests, of professional victims. Instead, one treats them like the royalty that they are.

Claire Christian, president of the Friends of the Arlington Library, did register a complaint, but it wasn’t about Hannah-Jones’ outlandish and confiscatory fee. Instead, Christian was upset because a news outlet “posted an article about the upcoming event with Nikole Hannah-Jones and it’s getting a lot of very ignorant and negative comments.” As the Daily Wire noted, ignorance is just the opposite of the main reason why people object to presentations by Nikole Hannah-Jones: “Criticism of Hannah-Jones is primarily because she is not a historian and leading historians have rejected her factual premise that the U.S. was founded to preserve slavery.”

Hannah-Jones’ ridiculous fee demonstrates, as if we needed new demonstration of the fact, that there is no systemic racism in the United States. People such as Nikole Hannah-Jones are not only not oppressed but are also the new elites, the unquestioned and unquestionable privileged ones whose victimhood status confers upon them the right to be cosseted beyond the wildest dreams of those who are not similarly oppressed. It pays to be oppressed in America today. It pays to be a victim. And clever hucksters such as Nikole Hannah-Jones and Ibram X. Kendi, knowing that there’s a new Leftist sucker born every minute, are cashing in.