MUST SEE: Man Unloads on Maricopa County Board of Supervisors ‘You Are the Cancer Tearing This Nation Apart’ 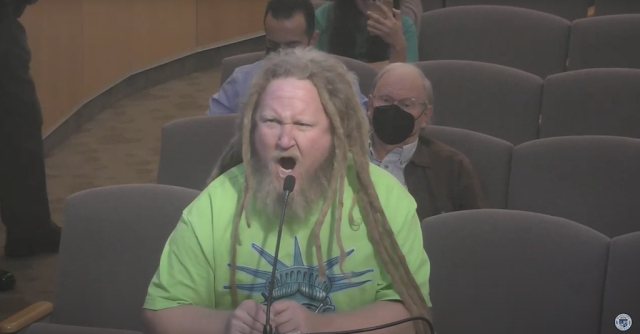 Frustrated Arizonians spoke out at a Maricopa County Board of Supervisors board meeting on Wednesday, fed up with the numerous election regularities arising from the 2020 and 2022 elections.

Ballot mules, successful in swing states across the county in 2020, appeared to be back at it.

Arizonians are fed up.

Yelling, interruptions and scathing criticisms were hurled at the Maricopa County Board of Supervisors Wednesday, during the board’s first meeting following a midterm election whose administration has been called into question locally and across the country.

Nearly two dozen spoke during the public comment portion of the Wednesday morning meeting, most of them there to speak out against the way the election was handled.

Elections in Maricopa County are administered through a joint effort between County Recorder Stephen Richer and the board of supervisors, which both support the county elections department. Richer’s office is responsible for early voting while the elections department manages Election Day voting, where there were problems with ballot printers and tabulators.

The dreadlocked, t-shirt and short clad Matt Baker’s unimposing demeanor as he approached the podium did not hint at the impassioned speech to come. Mr. Baker channeled the frustrations of many Americans. He was epic.

Mr. Baker told the Board, “Good morning.  Once again the eyes of the world are upon Maricopa County for another botched election. Am I here to accuse you of stealing the vote? Heavens no, for that would make me a terrorist, wouldn’t it?”

“Let me ask you.  If you took your life savings to a bank, and the teller put them in a machine, and the machine kicked out one out of four of your bills, and the teller said, ‘Don’t worry, we’ll put them in Box 3 over here, and we’ll let you know how many were in here later. We’ll send them off to a separate location and someone will be sure to get back to you and tell you how much money you have,’ would you be ok with that?”

Baker’s passion and frustration rose as he continued.

“No! You would not be okay with that! Now ask yourself the question, which is more valuable? Your vote or your money? Now ask a lobbyist that same question. Now ask a campaign manager that question. Now ask Mark Zukerberg that question, which is more valuable…your money, or your vote, or your country, or this world,or the corruption that is taking over every single county in this nation.”

“And then you look into your own soul, and you look back at yourself in the mirror, and realize that you… are…. the… cancer that is tearing this nation apart. Good day.”