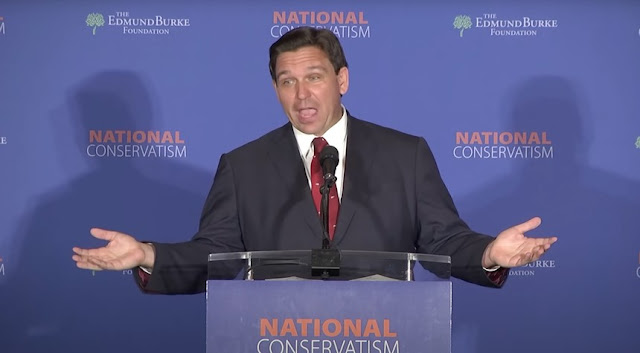 It should be clear by this time that popularity has nothing to do with electability.

Trump filled rally after rally in state after state with countless, full-house, full-stadium crowds, and such numbers do not lie. There really was a red wave in the midterms, but it was macro-engineered to a trickle, as should have been expected. The scam of  “malfunctioning” voting machines, the shortage of paper ballots, the tsunami of mail-in and late ballots, the temporary closing and slow-downs of polling stations, and so on would have been sufficient to determine an electoral result.

2020 was an early run for 2022, which in turn should be regarded as a template for 2024. I am absolutely sure that the Dems are now, even as we speak, preparing favorable ground for the next presidential election. As Stalin is reputed to have said, “It’s not the people who vote that count, it’s the people who count the votes.” To make Trump responsible for Democrat malfeasance is wholly misguided.

DeSantis is now the favorite among many Republican voters and almost all conservative commentators for the Party presidential nomination. Such passionate advocates seem to have missed two essential points:

Trump has obviously made his mistakes. As Alicia Colon writes on American Thinker, “There is no question that Donald Trump is a flawed human being like most successful businessmen.” She goes on: “Whenever I read the complaints from Trump haters, it’s all about his personality, his tweets, his misogynism, his sexist remarks, blah, blah, blah. This is infantile, high school criticism that has no place in political punditry.”

Similarly, as J.B. Shurk writes, everything that the establishment class “has fraudulently peddled against Trump—that he’s imperious, mercurial, uncouth, unworthy to hold office, a Russian spy, a warmonger, an insurrectionist, a ‘denier,’ a criminal—is nothing but an endless barrage of psychological warfare directed against MAGA voters.”

Trump’s flaws of character — and who is without them — do not alter the fact that Trump is an indomitable fighter and the most successful president in recent history. His ego is concomitant with his strength; the two cannot be separated. To turn against him now and indulge in gutter journalism, righteous schadenfreude, or in considerations of realpolitik largely because a number of his chosen endorsements succumbed to a corrupt and rigged electoral machine is a sign of conservative defeatism and, in some cases, of self-enamored mobbing.

We were quite happy with his major and unprecedented policy successes: making America energy-independent, restoring the manufacturing base, revisiting trade deals to benefit American workers, creating a surge in employment and prosperity, laboring to put a stop to illegal immigration, appointing conservative judges, rebuilding a depleted military, and establishing renewed American pre-eminence on the international stage.

Now we are ready to consign him to the golf course. How quickly gratitude turns to recrimination.

Rather, this would be the time to rally the troops and to work indefatigably, as I argued previously, toward cleaning up the Augean Stables that are now the condition of American politics.

Trump is still “the Donald.” Republicans need to get their act together instead of unintentionally justifying the betrayal of the RINO Machiavellian elites and foolishly consolidating the Democrat campaign against the very nation they presumably hold dear.