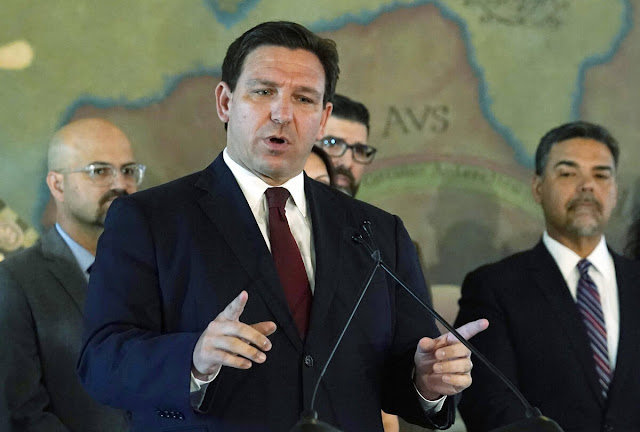 FILE - Florida Gov. Ron DeSantis speaks at Miami's Freedom Tower, on Monday, May 9, 2022. A Florida law intended to punish social media platforms like Facebook and Twitter is an unconstitutional violation of the First Amendment, a federal appeals court

What, if anything, did the midterms tell us about the country?

During the COVID-19 lockdowns, American elections radically changed to mail-in and early voting. They did so in a wild variety of state-by-state ways. Add ranked voting and a required majority margin to the mess and the result is that once cherished Election Day balloting becomes increasingly irrelevant.

Election night also no longer exists. Returns are not counted for days. It is intolerable for a modern democracy to wait and wait for all sorts of different ballots both cast and counted under radically different and sometimes dubious conditions.

The Democrats — with overwhelming media and money advantages — have mastered these arts of massive and unprecedented early, mail-in and absentee voting. Old-fashioned Republicans count on riling up their voters to show up on Election Day. But it is far easier to finesse and control the mail-in ballots than to “get out the vote.”

The country is divided in more ways than ever. America’s interior just gets redder and the bicoastal corridors bluer.

Exceptional Republican gubernatorial or senatorial candidates such as Lee Zeldin, Tudor Dixon and Tiffany Smiley in blue states such as New York, Michigan or Washington cannot win upsets against even so-so Democratic incumbents — even during a supposedly bad election cycle for Democrats, laboring under a president with a 40 percent approval rating.

Similarly, media-spawned leftist heartthrobs such as Beto O’Rourke and Stacey Abrams can burn through hundreds of millions of dollars. But they still cannot unseat workmanlike Republican incumbents in Texas and Georgia.

Out-of-state immigration has only solidified these red-blue brand polarizations.

Over the past decade, millions of conservatives have fled California, Illinois, New Jersey, New York and Pennsylvania to Florida and Texas.

As voters self-select residences on ideological grounds and the deleterious effect of blue states’ governance, the country is gravitating into two antithetical nations. Americans vote not so much for individual personalities as blocs of incompatible parties, causes and ideologies.

Winning or losing means revving up party bases, not running as much on a variety of issues. President Joe Biden’s vicious attacks on conservatives as semi-fascists and un-American worked. When he recklessly warned that democracy’s death was synonymous with Democrats losing, he further inflamed his base.

Biden also goaded young people to vote by canceling half a trillion dollars of student loan debt. He told young women that they would die without unlimited abortions. Most of the mud stuck.

In contrast, Republicans wrongly assumed all voters, red and blue, cared most about spiking inflation, unaffordable food and fuel, an open border and a disastrous foreign policy. Americans do worry, but also demand concrete solutions that they often did not hear from even insightful critics of Biden’s ruinous agendas.

Florida Gov. Ron DeSantis likely emerges as the dominant force in conservative politics. His landslide win in Florida carried all down-ticket statewide candidates throughout Florida, which has become as red as California has turned all blue.

Pollsters got it wrong — again. But this time once trustworthy conservative pollsters had little inkling that the simmering left-wing base was enthused by wild talk of abortion and insurrection.

The real under-polled voters were not silent, wary Trump supporters, but this time around seething upscale women and college students.