How Could John Fetterman Have Won? Every Possible Answer Is Bad in a Different Way. 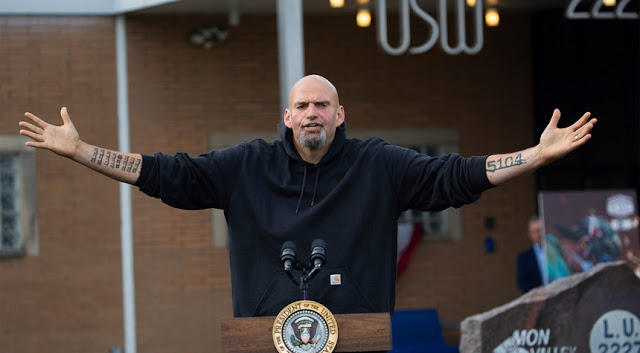 It’s hardly even believable: the stuttering, sputtering John Fetterman, a stroke victim who only rarely manages to utter a complete sentence, coasted to victory in the Pennsylvania Senate race. Like Joe Biden, Fetterman is so clearly unfit for his new job that no sane person could possibly think otherwise; it boggles the mind to think that any Pennsylvania voter could have seen any of Fetterman’s incoherent ramblings over the last few weeks, both in his debate with Dr. Mehmet Oz and in his campaign rallies, and thought, “That’s the man I want representing Pennsylvania in the Senate.” But Fetterman will show up in the Senate in January — if someone can guide him to where it is — and all the explanations of why this ridiculous charade is set to happen are bad in different ways.

The immediate possibility, of course, is that Fetterman’s victory is due to chicanery at the ballot box. Over at Townhall, Mia Cathell reported Wednesday that “in an undercover video filmed by Project Veritas Action (PVA) journalists at a Philadelphia polling location, Project Veritas founder James O’Keefe alleges that the investigative group’s journalists were told whom to vote for mere feet outside of one of the city’s polling places. Two of the interactions were captured on camera.” The person telling voters how to vote was, of course, a Democrat Party operative. O’Keefe explains, “This is referred to as electioneering.” It’s also illegal.

This is striking, but it isn’t evidence of large-scale ballot box tampering. In a clear sign that they suspected they would have to cheat in order to win, the Fetterman camp filed suit the other day to have ballots counted even if they were marked with the wrong date. But as it turns out, they didn’t even need the tainted ballots to put their man over the top. So what does explain the victory of a candidate who is without any doubt the least competent and capable individual ever to stand as a candidate for the United States Senate?

One answer could be the weakness of his opponent. Trump-endorsed candidates have generally done well all over the country, but Dr. Oz was different. While he trumpeted his connection to Trump during the primary, after he became the Republican candidate, Oz retooled his website and Twitter page to remove all mention of Trump, thereby giving the impression that he was opportunistically using Trump to corral America-First voters into his camp but that his commitment to their cause wasn’t sincere. Oz also aroused suspicion by maintaining his status as a Turkish citizen at a time when Turkey is growing progressively more authoritarian and hostile to the United States. The MAGA base was what would have elected Oz, and he did his best to alienate it. Once that was done, all he had were Pennsylvania Romneyites and RINOs, and there proved to be not enough of them to put him over.

The other obvious answer is that Pennsylvania voters wanted John Fetterman in the Senate. They saw that he was obviously unable to discharge the duties of the office for which he was running and simply didn’t care. Fetterman’s victory proves that the Democrats’ willingness to put up with Old Joe Biden’s obvious incapacity was no anomaly. The Fetterman victory is an indication that the Leftist elites are just rubbing it in now, showing that they have now filled a sufficient number of people with their propaganda that they can elect literally anyone to any position they want and perpetuate the governance of a shadowy, behind-the-scenes oligarchy. Fetterman, like Biden, will simply serve as a puppet for the people who are pulling the strings, and that seems to be just fine with Pennsylvanians. They elected a puppet knowing that he is a puppet, but he is a puppet for what they want: the gutting of the American economy, open borders, high crime rates, skyrocketing gas prices, continuing assaults on the freedom of speech, and all the rest of contents of the Democrats’ grab-bag of horrors. Fetterman may be incapacitated, but he’s another vote for the Left’s agenda, and that’s all that matters.