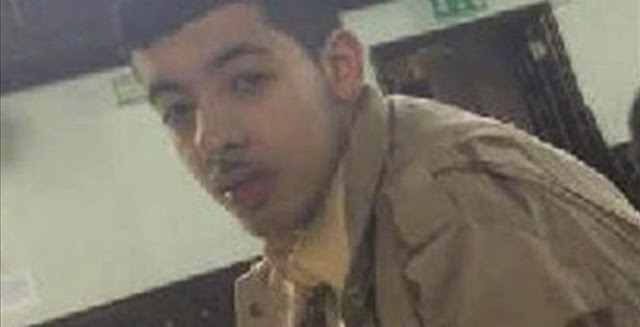 The suicide bomber who killed 22 people and severely wounded dozens more at an Ariana Grande concert in Manchaster earlier this week traveled to Libya and back to the UK before carrying out the attack. He also reportedly made trips to Syria, where ISIS is headquartered. From Fox News:


The man British police say blew himself up as a packed concert was letting out in Manchester, England, Monday night is believed to have traveled to Syria and had "proven" links with the Islamic State terror network.
British and French intelligence have information that Salman Abedi, 22, had been to Syria, although it was unclear if he was part of a larger network of attackers, French Interior Minister Gerard Collomb said Wednesday.
Abedi — who was born in Britain to Libyan parents — had traveled to the war-torn North African nation "three weeks ago and came back, like, days ago," a friend told The Times of London.
Now, investigators are attempting to learn whether the university dropout attended a terrorist training camp in Libya, where ISIS and Al Qaeda fighters are engaged in a bloody war against government forces.
Abedi was born in the UK, but is the son of refugees from Libya. According to a former Libyan government, his father was part of an Al Qaeda offshoot back in his home country.
The father of Manchester bomber Salman Abedi was purportedly a member of an Al Qaeda-backed group in Libya, a former Libyan security official said.
Abdel-Basit Haroun, a former security official in Libya, told the Associated Press Wednesday that he personally knew Ramadan Abedi, the father of Salman Abedi, and that the elder Abedi was a member of the Libyan Islamic Fighting Group in the 1990s. The group had links to Al Qaeda.
In the aftermath of the attack, Ramadan has argued his son was innocent and that his family is a peaceful one.
"We don't believe in killing innocents. This is not us," he told TIME from Tripoli Wednesday.
Authorities have since arrested him and Salman's younger brother in Libya. No word on whether they'll be sent to the UK for questioning.
UPDATE: The brother reportedly knew about the attack and has been cooperating with authorities. He was arrested on suspicions of working with ISIS.
https://townhall.com/tipsheet/katiepavlich/2017/05/24/manchester-suicide-bomber-traveled-to-libya-before-attack-n2331241?utm_source=thdailypm&utm_medium=email&utm_campaign=nl_pm&newsletterad=
Posted by Frances Rice at 10:20 AM