This 3-minute exchange on MSNBC about the Comey firing epitomizes the hypocrisy coming out of the Democrat Party.

REP. WATERS:  No, no you're not confused.

PETER ALEXANDER:  I am confused.

Here's the full exchange that occurred on MSNBC: 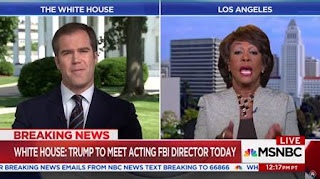 REPORTER (CLIP): Can you tell us anything about the discussion in the briefing?

REP. MAXINE WATERS (CLIP): No, it's classified and we can't tell you anything, all I can tell you is the FBI Director has no credibility.

PETER ALEXANDER: That was Congresswoman Maxine Waters criticizing now former FBI Director James Comey after a closed briefing on Russia's interference in the US election. It took place just one week before the President took office here at the White House. For more, I want to bring in the Congresswoman herself, Maxine Waters who is joining me now, Congresswoman we appreciate your time. You obviously have been very critical of James Comey in the past. You said that he had no credibility, I assume that you support the President's decision then to fire his FBI Director.

ALEXANDER: But Congresswoman, I understand that in the past he was praising him but if you said that FBI Director James Comey had no credibility, wouldn't you support the fact that the President, then candidate Trump, now President Trump, made the decision to get rid of him?

WATERS: You have an investigation going on where the President is implicated. and this is a serious investigation. I've been trying to get people to focus on this connection with the Kremlin and with Putin. I have a resolution that I introduced in February. I think there's enough there that we know about the Kremlin and about Putin to be concerned about whether or not there was collusion.

ALEXANDER: so to be clear you think, so to be --

WATERS: I believe there was and I believe that they should have to connect the dots and get the facts because I think it will lead to the impeachment of this President.

ALEXANDER: So Congresswoman respecting that be to be clear, you believe it would have been better to keep in place an FBI Director who you said had no credibility to oversee this investigation, than to find someone who you think would be a better choice.

WATERS: No, but I believe the President thought that. Don't forget, you're talking about what some Democrats said, what I said, but don't forget. He was the President, the President supported him, he had confidence in him, it was within his power and he said --

ALEXANDER: But you said he had no credibility so it would seem to make sense that he should get rid of him.

WATERS: No. No, no, no. Under investigation, this President basically has interfered with an investigation where he may be implicated. That's outrageous and that's why we're having so much of a conversation about it today. Everybody is talking about it because this is highly unusual.

ALEXANDER: The bottom line is that you think an FBI Director without credibility would have been best served in this position to try to pursue this investigation.

WATERS: The bottom line is I think the President, if the President had fired him when he first came in, he would not have to be in a position now where he is trying to make up a story about why it does not meet the smell test.

ALEXANDER: Understood, so if Hillary Clinton had won the White House, would you have recommended that she fire FBI Director James Comey?

WATERS: Well, let me tell you something, if she had won the White House, I believe that given what did he to her, and what he tried to do, she should have fired him. Yes.

WATERS: No, no you're not confused. If the President is implicated in an investigation –

ALEXANDER: I am confused…

Complied by the Republican National Committee