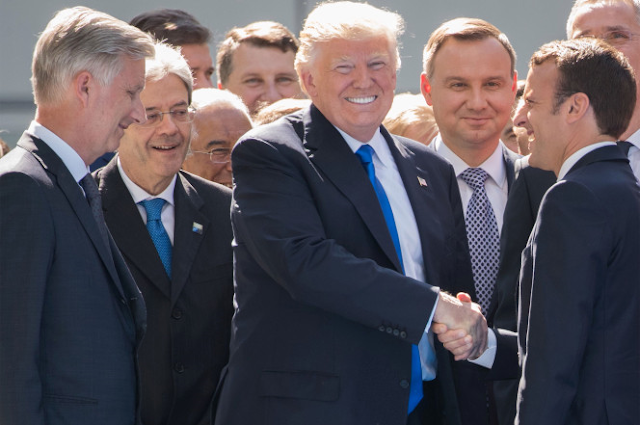 
He was clear, concise and disciplined. Those were the key ingredients that created a striking success for President Trump in his first foreign trip.
If he can bottle that recipe and start each day in the Oval Office with a big gulp of it, his presidency gets a renewed chance to live up to its promises.
Trump’s clarity on the global stage was a reminder of why he was elected. Much as he did in the campaign on his best days, he cut through the BS to get to the heart of contentious issues and offer forceful solutions.
Under enormous scrutiny, he acted in the best traditions of American leadership on two continents by helping create a Muslim NATO to combat radical Islamists and by pushing the original NATO to face terrorism and financial facts.
Throughout the weeklong trip, which also included a substantive, friendly meeting with the pope and tense negotiations over trade and climate change, Trump showed the message discipline too often missing in the White House. And he did it without sacrificing his core convictions or puckish personality.
One priceless moment came as he stood in the $1.4 billion new NATO building in Brussels and referred to American taxpayers running out of patience with the alliance’s deadbeats. The incident no doubt cheered his supporters at home as much as it rankled the European elites, most of whom regard taxpayers as suitable only for fleecing, especially when they are American.
Click here to read the entire article.
Posted by Frances Rice at 5:09 PM