Proof That Liberals Are Stupid 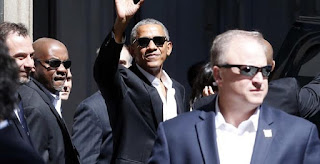 I rarely use the word stupid.  Most frequently the word I use is ignorant which means lacking knowledge or awareness.  Stupid means something significantly different.  Stupidity means lacking intelligence, understanding, reason, wit and/or good sense.  Republicans have often referred to liberals as just plain wrong though some invoked stupidity in a knee-jerk manner.  If you doubted that liberals are stupid, we now have proof.

The proof comes from the high priests of the Left – the editorial board of The New York Times.  What set them off and displayed their complete lack of intelligence and good sense was their editorial attacking former President Obama for taking a $400,000 speaking fee from Cantor Fitzgerald. In an editorial entitled The Cost of Obama's Speech, they reacted with shock that he would accept such a fee from the forces he was "fighting" against.  And this is not feigned shock like Captain Louie in Casablanca.  This is real shock.

They even quoted his own words from The Audacity of Hope.  I read that book.  I just thought the people who fell for his slop were fools.  Now I know they are stupid.

Ruth Marcus joined the chorus of the offended and took to the pages of the Washington Post to chastise the Obamas for the $400,000 fee.   The stupidity of the Left was further validated when Vox published an article with a title that states the $400,000 fee will undermine everything Obama believes in.

Everything Obama believes in is – Obama.  Did you really think he was going to live by all that garbage he was shoveling down your throats?

In Los Angeles we live with celebrities on a daily basis.  We have a term for people like Obama who are enamored by these celebrities – Star_____.  The Obamas would be the King and Queen of that if they were not exceeded by – you guessed it, the Clintons.

But did you not get a hint where the Obamas were headed when they signed what is estimated to be a $60-65 million deal for their memoirs.  Penguin is going to have to sell a lot of books. That means a royalty of $6.50 on each of 10 million books sold.  Seems more like a bribe than good business.

But let us review what the Obamas have been doing since they left office:

•      In early February, the Obamas were hosted by Virgin chairman Richard Branson on his private island in the British West Indies, for an unknown length of time.

•      The next stop was Tetiaroa, the South Pacific private island that once belonged to Marlon Brando, and now houses ultra-expensive and ultra-exclusive villas (reportedly one is for sale for 6 million euros).  The former president decided this was the ideal spot to pen his memoirs for perhaps as much as a month.  The prices are $3,000 a night.

•      And, finally, there are the now infamous photos of the Obamas with David Geffen and his guests (Tom Hanks, Bruce Springsteen, Oprah and Gayle King and God knows who else) on his mega-yacht Rising Sun – which measures 454 feet and regularly shows up at all the best water spots on the globe.   The yacht just happened to be in the neighborhood when the Obamas were on Tetiaroa.

Amazingly, none of this set-off the Leftists.  Hanging with the ultra-rich is fine; just don't take Wall Street money.

Did you really think Obama was going to be hangin' with the common folk?  Jay Z and Beyoncé will be "how they will be rollin'" in the future along with clipping his G's as he did when he was talking to the common folk.  Maybe some time at Oprah's many estates.  He will be hobnobbing with anyone rich and famous who will take him on exclusive golf courses where he can wine and dine with the elite.

Some would say the Obamas deserve to make a lot of money because they sacrificed for the country for eight years.  Not to get technical, but the people of the United States provide handsomely for them.  Obama receives a pension of $205,700 the first year out of office which will increase over time.  He also receives funding for staffing, rent, travel, etc.  This does not include his secret service protection.  This amounts to millions of dollars each year.  He may even have some friends who would pick up a few meals for him and maybe a few rounds of golf.

Fascinating how easily the Left is captivated by rich people who are willing to say and do things that further their own exclusive lifestyle.  Somehow they still think the Democratic Party cares about the commoner.  It is all about power and money.  Money in their pockets.

The question is, are you stupid enough to believe them?