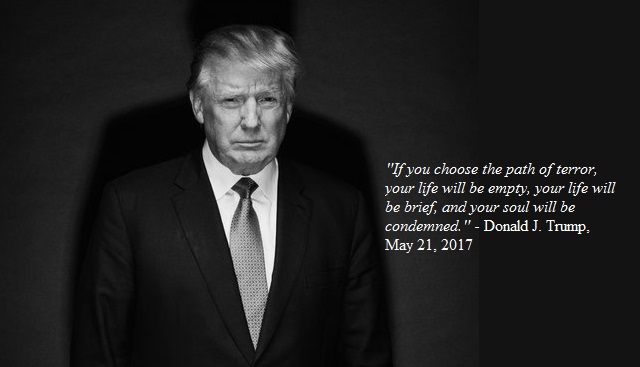 President Trump’s first major speech overseas was in the heart of Islam, Saudi Arabia. The speech was eloquent and presidential. While many will analyse the speech from various angles, I believe the most important sentence in the speech made by the President was:
If you choose the path of terror, your life will be empty, your life will be brief, and your soul will be condemned.

This one sentence denies the basic tenant of Islam – martyrdom.

President Trump went on to say:

When we see the scenes of destruction in the wake of terror, we see no signs that those murdered were Jewish or Christian, Shia or Sunni. When we look upon the streams of innocent blood soaked into the ancient ground, we cannot see the faith or sect or tribe of the victims – we see only that they were children of God whose deaths are an insult to all that is holy.
The Quran (4:74) reads:


“Let those fight in the way of Allah who sell the life of this world for the other. Whoso fighteth in the way of Allah, be he slain or be he victorious, on him We shall bestow a vast reward.”
The only guaranteed way for a follower of Mohammed to enter paradise is to fight and die in the way of Allah – martyrdom. In Sahih Al-Bukhari Volume 4, Book 52, Number 73, Abdullah bin Abi Aufa, Allah’s Apostle, said, “Know that Paradise is under the shades of swords.”
President Trump undermined that basic tenants of Islam before a majority of the key leaders of the Arab world. This is the equivalent of going to Rome and denying that the death of Jesus on the cross gives mankind life everlasting.
What President Trump said was blasphemy in many Muslim majority countries.
President Trump’s words are more powerful than using the phrase “radical Islamic terrorism.” For you see terrorists are a culture of death, as the President pointed out, and he single handily denied them paradise and their purpose for following Allah.
Brilliant!
CLICK HERE TO SEE THE VIDEO OF PRESIDENT TRUMP’S SPEECH IN SAUDI ARABIA
TO READ THE FULL TRANSCRIPT OF PRESIDENT TRUMP’S SPEECH, CLICK HERE