Netanyahu: For The First Time in My Lifetime, There Is Hope For Change and Realistic Peace 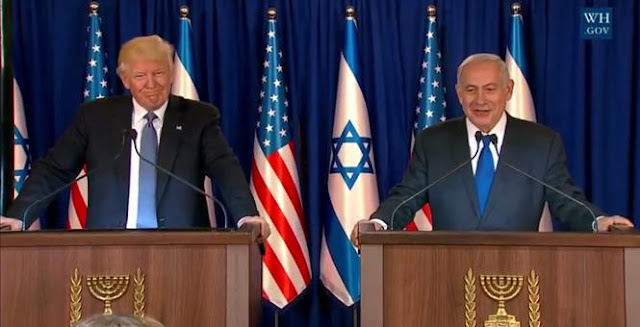 Speaking from his home in Jerusalem Monday, Israeli Prime Minister Benjamin Nentanyahu welcomed President Donald Trump and First Lady Melania to the Holy City. The two leaders gave remarks about the issues facing the region and bolstered the strong alliance between the countries.


"We appreciate the reassertion of American leadership in the Middle East," Netanyahu said, taking a swipe at the previous administration. "For the first time in my lifetime, I see a real hope for peace."
Netanyahu praised the President's recent action to bomb a Syrian airbase in response to President Assad's chemical weapons attack and applauded the administration's stance against Iran. He also noted new partnerships forming in the Middle East among previous enemies in order to fight the common threat of terrorism.
"Today we reaffirm the unbreakable bond of friendship between Israel and the United States," Trump said. "We want Israel to have peace."
"There are many, many things that can happen now that would never have been able to happen before," he continued.
The President visited the Western Wall earlier in the day and will visit Bethlehem with Palestinian Authority President Mahmoud Abbas Tuesday before speaking at the Israel Museum. He departs the country for Brussels late Tuesday night.