By The Editorial Board I The Wall Street Journal 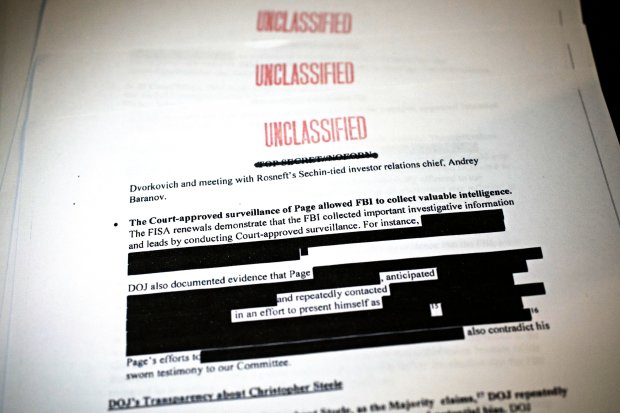 The House Intelligence Committee on Saturday released the long-awaited Democratic response to allegations the FBI abused its surveillance powers during the 2016 election. Committee Chairman Devin Nunes owes ranking Democrat Adam Schiff a thank you for assisting his case.

The 10-page Democratic memo begins by declaring that “The FBI and DOJ officials did not ‘abuse’ the Foreign Intelligence Surveillance Act (FISA) process, omit material information, or subvert this vital tool to spy on the Trump campaign.” Yet the facts it lays out show the opposite.

In particular the memo confirms that the FBI used an opposition-research document paid for by the Hillary Clinton campaign and Democratic National Committee as part of its application to surveil Carter Page, who was associated with the Donald Trump campaign.

Democrats dispute the degree to which the FBI relied on the dossier created by opposition-researcher Christopher Steele in applying for its FISA court order, but that’s beside the point.

If the FBI had as much “compelling evidence” and “probable cause” as the memo asserts, it would not have needed to cite the Steele document. And the Democrats do not dispute that the Steele dossier was the FBI’s only source in its initial FISA application for its allegation that Mr. Page met with suspect Russians in Moscow in July 2016.

The Democratic memo makes no attempt to rebut the widely reported news that former Deputy FBI Director Andrew McCabe told Congress that the FBI would not have sought a surveillance warrant without the dossier. Democratic Rep. Jim Himes claimed on “Fox News Sunday” that Mr. McCabe never said that, but then why not put that in the memo?

The Democratic memo also confirms that the FBI withheld from the court the partisan provenance of the dossier. Democrats even provide, for the first time in public, the precise language the FBI used in its initial application in a long, obfuscating footnote.

The footnote ends: “The FBI speculates that the identified U.S. person was likely looking for information that could be used to discredit Candidate #1’s campaign.”

Speculates? Likely? Could? The dossier was paid for by actors whose overriding purpose was to defeat Mr. Trump. Nowhere do Democrats say the FBI used the words “political” or “partisan” or “campaign,” much less Clinton or Democratic National Committee.

The Democratic memo claims the FBI acted “appropriately” in not “revealing” the name of an “entity” in a FISA application, but this is laughable. The FBI sometimes masks identities to preserve sources and methods, but the Steele dossier was a pastiche of gossip and rumor based on Mr. Steele’s contacts.

Disclosing his partisan funders would have betrayed no important intelligence sources but would have given the court reason to ask the FBI for more credible information before granting an eavesdrop order.

Messrs. Steele and Simpson briefed their media friends in September and October about their dossier, despite FBI prohibitions. The FBI nonetheless falsely told the court that Mr. Steele wasn’t the source of a Yahoo News article that it used as additional evidence in its application.

While the Democratic memo repeatedly refers to Mr. Steele’s reporting as “reliable” and “credible,” it confirms that the FBI fired Mr. Steele after it found he hadn’t told the truth about his media spinning.

The Democratic memo devotes considerable space to smearing the hapless Mr. Page, as if he’s some kind of master spy and the Rosetta Stone of the Trump-Russia story. Yet no one has offered proof that he colluded with the Russians, and he hasn’t been indicted.

Democrats also make much of the fact the FBI started looking into the Trump campaign in July 2016 but didn’t receive “Steele’s reporting” until “mid-September.” So what? The issue here is the fairness and honesty of the FISA application in late October (not the investigation), and what matters is that the FBI didn’t move on the FISA application until after it received the dossier.

The only definitive evidence of political “collusion” so far is that the Clinton campaign paid Mr. Steele to troll his Russian sources for dirt on Donald Trump. The FBI then used this dirt as a reason to spy on Mr. Page and anyone he was communicating with. Imagine how the press would be playing this story if the roles were reversed?